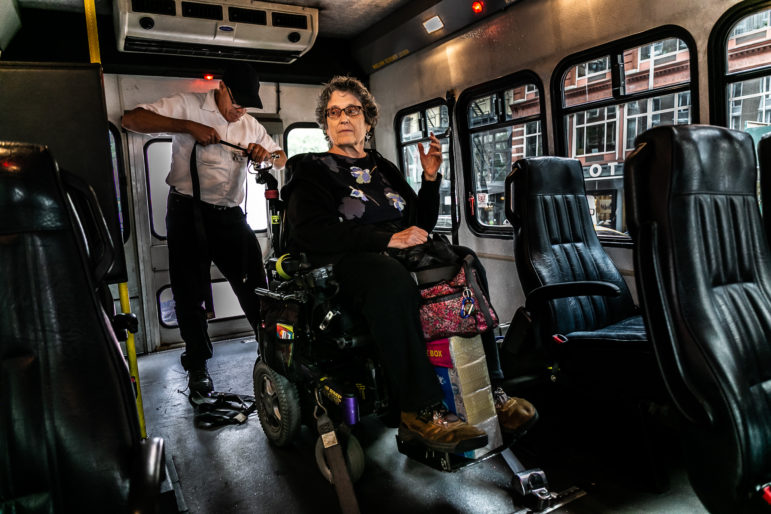 Jean Ryan, a member of the advocacy group Disabled in Action, waits for her wheelchair to be harnessed in an Access-A-Ride van.

For Eman Rimawi, a campaign organizer with New York Lawyers for the Public Interest, getting around can be difficult. The closest subway to where she lives is the Parkchester 6 train station in the Bronx, which has no elevators, so Rimawi—an amputee who uses a walker—often takes Access-A-Ride (AAR), the MTA’s paratransit shared car service.

This past spring, there was an MTA board meeting she wanted to attend, along with the press conference before it. She opted to use AAR to get there. But despite leaving her house around 6:15 a.m., she didn’t arrive at the Manhattan event until around 10 a.m., as her AAR driver took a meandering route to pick up and drop off other passengers along the way.

“I missed the press conference completely,” she recalls, adding that when she complained about the long ride to AAR, she was told she should leave her house earlier to account for potential delays.

“How is that fair? How is that right?” Rimawi says. “What time would you like me to wake up? Because I’m already waking up before the whole neighborhood’s awake, before my boyfriend is even awake, before the lights [are] even out. So I don’t understand what you want me to do.”

Run by the MTA, AAR is required under the Americans with Disabilities Act, and is designed to serve New Yorkers with a disability or medical issue that prevents them from using public transit. Participants must first undergo an application process to determine if they’re eligible, which includes an in-person evaluation. Once approved, they can book rides with AAR one to two days in advance of their trips, and are picked up and driven to their destination by drivers under contract with New York City Transit (NYCT). This 24/7 service is the only option for many disabled or elderly commuters, who pay the full MTA fare of $2.75 each time they use AAR. Users took approximately 609,000 trips with the service in May, the most recent month that ridership numbers are available for.

But customers say the program, which the MTA expects will cost $521 million in 2018, is plagued with issues. These include complaints about drivers who are poorly trained in dealing with disabled passengers, and that the service is slow and inefficient, regularly making users late for work and other engagements. A Yelp page for AAR boasts just one and a half stars, and includes dozens of scathing reviews. Additional criticism—including an 2016 comptroller audit which found drivers were able to self-report their performance data, making it hard to hold them accountable for bad service—has fallen on deaf ears, with the MTA failing to make significant changes to reform AAR, advocates say.

The transportation authority is currently making a concerted effort to improve services for disabled New Yorkers. NYCT President Andy Byford included accessibility as one of the top four priorities in his plan to overhaul city transit, pledging to install elevators at 50 new subway stations in the next five years, among other fixes. And while his plan includes efforts to “make paratransit responsive,” AAR users say they feel their needs have been somewhat overlooked.

“It’s sort of at the bottom of the list,” Rimawi says. “People forget that Access-A-Ride is part of the MTA, and when it comes to accessibility, it’s not just the elevators.”

AAR users face challenges before even boarding their rides. For most New Yorkers, a last-minute change of plans just means walking to the nearest subway or bus stop, or hailing a cab. But those who use AAR are required to book the service one to two days in advance, and must provide specific appointment times and addresses for each trip, which makes it difficult to plan on-the-go.

When users book a ride through AAR, they schedule a specific pick-up time, and must be outside to meet their drivers within five minutes of their scheduled pickup time or the driver will leave. Users, however, are expected to wait for drivers for up to 30 minutes after their pickup time, as the AAR considers drivers to still be “on time” as long as they show up within that 30-minute waiting window.

“You’ve just got to wait, and if it’s winter time, forget about it,” Rimawi says.

Users who don’t make it outside within five minutes of their pickup time are marked as “no-shows,” and those who rack up an “excessive” number of no-shows – any more than 30 percent of rides for users who take AAR at least seven times a month—can have their accounts temporarily suspended, according to the MTA’s website. Users’ accounts can also be suspended if they repeatedly cancel rides less than two hours before their trip, which the MTA considers a late cancellation.

“You never know if they are not going to show up on time,” says Clarita Dailon, a wheelchair user from the Bronx. The chance that she’ll miss her five-minute driver window and get stuck without a ride frequently causes her anxiety. “It’s a lot of stress.”

Even more frustrating, riders say, are the long, meandering routes drivers take to get them to their destinations. Since AAR is a shared-ride service, drivers will often pick up multiple customers on the same trip, and users say this can mean being diverted to another part of the city or the opposite end of their borough.

Rimawi says she was once in an AAR vehicle for six hours. After being picked up in Coney Island, her driver took her along to pick up another passenger in Valley Stream, Long Island, and then drop the other passenger off in Queens before taking Rimawi home to the Bronx.

“It was like extreme car-pooling,” she says. The ordeal was made worse by traffic, and her phone battery died along the way, so she had no way to contact anyone. “I got an external battery charger just so that I don’t have my phone die on me again, just in case.”

Shain Anderson, a community organizer with the Center for Independence of the Disabled, New York (CIDNY), says AAR’s many flaws can have significant, negative consequences for its users.

“You have users that have to wait in some cases for hours to get where they need to go. We have examples where people have missed appointments to see friends. We have examples of people missing funerals,” he says. “The big issue is that AAR is not simply reliable. They call it ‘Stress-A-Ride’ for a reason.”

Other users say they’ve had problems with AAR drivers being poorly trained or driving dangerously. Milagros Franco, a 42-year-old who works at Brooklyn Center for the Independence of the Disabled, says she was once in an AAR car where the driver failed to properly secure her wheelchair.

“We were going to my work,” Franco says. “She [the driver] was on the cellphone, and I hit the front seat twice and she looked at me like if I was a kid and I didn’t understand what was going on. I reported her.”

Franco never saw the driver again, and doesn’t know if the she was retrained or disciplined following the incident.

At a public event in July, the NYCT’s Byford said the MTA is currently looking at “every aspect” of AAR for potential improvements, including drivers using inefficient routes.

“We’re looking at the processes to stop you having to go on this magical mystery tour around the boroughs, to make it direct,” he told the crowd.

Many of the complaints about AAR were highlighted in a 2016 report by New York City Comptroller Scott Stringer, which accused the MTA of failing to adequately monitor the performances of its contracted drivers, and that drivers were largely allowed to “self report” their pickup and dropoff times, as opposed to having those times verified by GPS records.

Stringer’s office made several recommendations to the MTA, including that the agency should install GPS technology in all AAR vehicles, and take corrective action against contractors who were found to frequently violate AAR policies.

“Since the audit was conducted in 2016 there have been a series of aggressive actions and improvements to paratransit, including the launch of a live online dashboard that reports performance in six different categories to the public,” MTA Spokesman Shams Tarek said in a statement to City Limits.

“NYC Transit is committed to continuing to improve service and that includes strengthening incident and complaint tracking controls, a new e-hail pilot and GPS tracking to streamline booking, the creation of a permanent Paratransit Task Force by Chairman Lhota, and President Byford’s appointment of NYC Transit’s first-ever Senior Advisor for Systemwide Accessibility.”

The aforementioned e-hail pilot was launched last year in an effort to make AAR more flexible. It allows users to book green and yellow cabs through an app on-demand, as opposed to having to book in advance. The pilot was initially open to only 200 volunteers, though it has since expanded to around 1,200 AAR users. The program partners with the Taxi & Limousine Commission, so that all rides taken through the app will be reimbursed by the MTA.

Users who’ve tested the e-hail service say it’s not perfect—green and yellow cabs can be hard to find in some outer borough neighborhoods, and not all of the city’s taxis are wheelchair accessible—but Anderson of CIDNY says the reaction has been “overwhelmingly positive.”

“It has allowed a flexibility in travel that has not been seen before with AAR,” he says.

The e-hail pilot ends in October, though users and advocates are pushing the MTA to make it permanent (the agency says it is continuing to evaluate the program.) The MTA says it’s making other strides to improve AAR, noting that the service makes approximately 6 million trips per year, and that only a half-percent of those rides result in a user filing a complaint.

Other undertakings include the development of an AAR-specific app that’s currently being tested, and discussions with the Department of Transportation about allowing AAR vehicles to use the city’s bus lanes to speed up rides.

Despite its flaws, Rimawi says she’s glad AAR is an option, since it gives her the ability to get where she needs to—which is why it’s so important to her that the MTA improve the service.

“Access-a-Ride gives me freedom to just be a person,” she says.