Should the City’s Housing Plan Make NYCHA its Centerpiece? 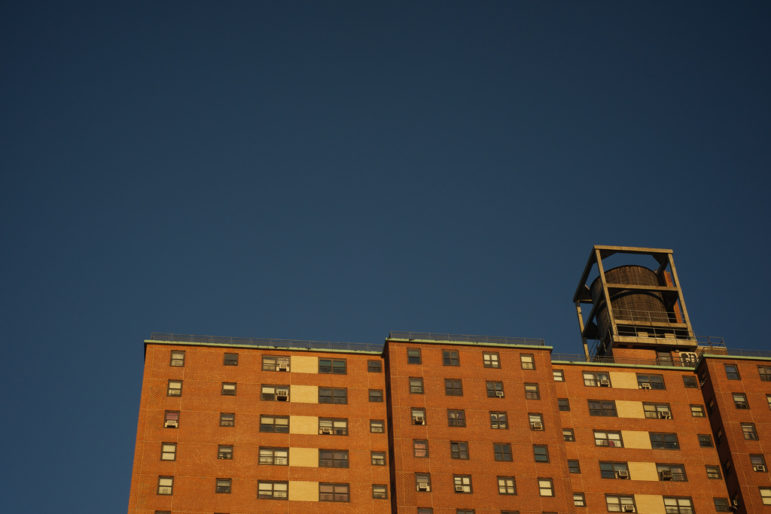 That the city’s public housing authority, NYCHA, desperately needs $31.8 billion immediately is old news. How the housing authority is going to find that money to make conditions for its 400,000-plus residents livable and how it might spend $30 billion effectively remains an open question.

A new report outlines an ambitious set of strategies to bring the housing authority’s portfolio of buildings to a state of good repair. It’s primary suggestion is to make NYCHA the centerpiece of the city’s affordable housing plan, directing planning and financing resources from the department of Housing Preservation and Development (HPD) and the semi-public Housing Development Corporation (HDC) towards NYCHA. Both organizations are currently tasked with overseeing the mayor’s plan to develop and preserve 300,000 units of income-targeted housing,

The report, published by the Regional Plan Association, also suggests a rule change to allow NYCHA to expand its sale of development rights to surrounding areas and a tax on ultra high-end real estate that could fund NYCHA. (A tax like that is also on the agenda of a key housing coalition lobbying Albany.)

“HPD and HDC are the most talented agencies in the entire country when it comes to taking disparate housing streams for housing and construction projects from all different levels of government with all different restrictions on them and cobbling them together,” says Moses Gates, who wrote the report and is vice president for housing and neighborhood planning at the Regional Plan Association.

“All of the housing plans since the 1980s have been very ambitions and gotten done,” said Gates, referring to plans under Mayors Koch, Bloomberg and de Blasio. “They have been big, ambitious undertakings that have had metrics. HPD and HDC know how to work with that. We want to bring that professional capacity to bear for NYCHA.”

There is sure to be a significant amount of skepticism towards the proposal, which would potentially require multiple city agencies to shift their focus and perhaps jeopardize the successful completion of the mayor’s affordable housing plan as it stands.

RPA suggests that fewer affordable housing deals might be completed due both to funding and capacity constraints on developers, contractors and subcontractors since such entities should be deeply involved with executing NYCHA renovations. The report suggests a new development entity focused solely on NYCHA.

City Hall did not respond to comment by press time. “When it comes to affordable housing, everything is a tradeoff,” says Gates. “When you build a unit for one person, that’s a dollar you’re not spending on another person. There are very few ways to do win-win things.”

“Of course we want and need more affordable housing but the bulk of the housing plan is preservation. If we need to preserve housing in New York City, why not include NYCHA in that?” says Stephanie Sosa, director of mission-driven development at the Association for Neighborhood Housing and Development.

If that leads to fewer non-NYCHA units being preserved, so be it, Sosa says. “Given the condition of NYCHA, and given the high need, its ok to take that hit.”

“There ought to be a one-city affordable housing plan that includes NYCHA as a central priority,” says Vic Bach, policy analyst and resident NYCHA expert at the Community Service Society (a funder of City Limits).

“Everyone I talk to in affordable housing wants to use the expertise that we have in our industry to help public housing,” says Rachel Fee, executive director of the New York Housing Conference.

“I don’t think people are viewing it as a competition for resources. It’s lets take our knowledge and capacity that we have as affordable housing developers and apply it to NYCHA,” Fee says.

Though the details of such a plan remain vague, it is an appealing notion to these affordable housing advocates, given the fact that coordinating the financing of housing projects is not a professional capacity NYCHA has traditionally had and that NYCHA’s need for capital is so dire.

“Its main operation is a property manager, not an innovative entity that knows how to do construction financing,” says Gates. “We have a very robust municipal government with all these agencies that are very good at their jobs.

In 2017, NYCHA estimated that it needed $31.8 billion in by 2022 and $45.2 billion by 2037. NYCHA’s NextGen 2.0 plan currently expects to raise $12.8 billion through 2027 from its Permanent Affordability Commitment Together or PACT plan, which would use two federal programs—the Rental Assistance Demonstration (RAD) and another mechanism known as Section 18—to transfer 62,000 units from public-housing funding to Section 8 and turn those developments over to private property managers. The NextGen scheme also projects earning $2 billion through 2027 from NYCHA’s infill development plan and calls for raising $1 billion through selling unused air rights on the authority’s parcels.

But the Citizens Budget Commission recently reported that NYCHA’s PACT plan is not on track to transfer 62,000 units by 2027 without additional streams of funding. It also said that NYCHA’s infill construction plan has largely stalled due to resistance from public officials and community organizations.

RPA says that NYCHA has no time to reconsider currently planned PACT transfers and infill construction and instead should be planning more significant new construction on its campuses. It says that that the city should consider a plan that  would allow NYCHA to transfer not some but all of its unused development rights to parcels nearby.

Unused development rights can currently be transferred only within contiguous parcels. RPA suggests that a rule change allowing NYCHA to sell development rights within a half-mile or even community district radius could bring in much needed revenue.

The report estimates that NYCHA owns 78 million square feet of unused development rights valued between $4.2 and $8.4 billion, depending on the new radius within which transfer is allowed and the affordability restrictions on new development. For this to occur, a city-wide review process to amend the zoning code would be needed.

Along the lines of reforming and streamlining NYCHA and city bureaucracy, the report also suggests potentially splitting up property management among smaller localized entities across the city, potentially transferring responsibility for groundskeeping to the Parks Department and transferring senior housing to non-profit managers.

Regarding tenants who have been vocal in their opposition to Rental Assistance Demonstration transfers, notably at Fulton Houses where some are protesting a plan to demolish and rebuild two buildings, Gates says tenant concerns can be addressed but the city must move forward.  “We don’t have the luxury to let perfect be the enemy of good. We’re at a point where the deferred maintenance has started to compound.”

NYCHA estimates that unmet capital needs cost $850 million annually. “Our public housing will soon be in danger of physical collapse,” the RPA report says. “The consequences of this will be drastic to our budget.”

5 thoughts on “Should the City’s Housing Plan Make NYCHA its Centerpiece?”