At NYCHA’s Fulton Houses, A Bitter Divide Over the Future of the Development 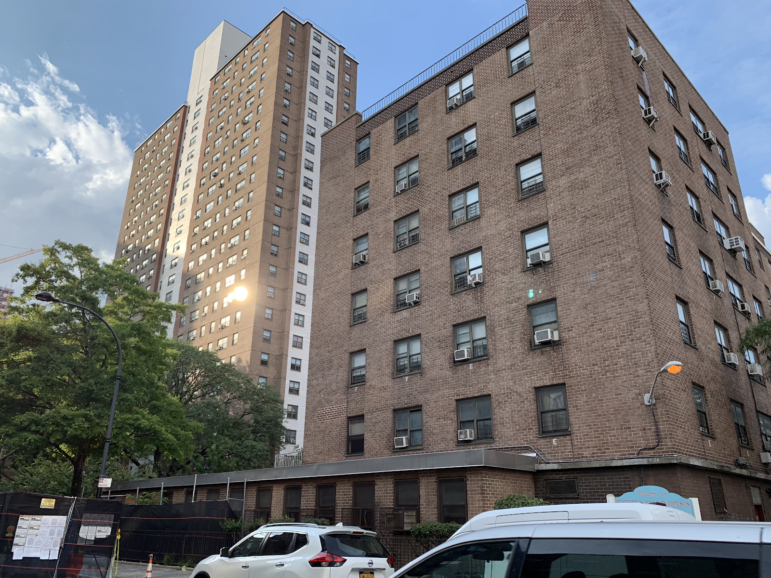 According to NYCHA, Fulton Houses needs $168 million in repairs.

Angry residents of the New York City Housing Authority’s Fulton Houses and others rallied outside of Chelsea Market Monday afternoon — where Mayor Bill de Blasio was expected to make an appearance on NY1 — in opposition to a proposal to demolish and rebuild two buildings at the public housing complex in order to fund repairs there.

The protesters chanted “housing is a human right,” “public housing not for sale,” and “save Fulton Houses,” as they circled the busy building’s entrance on 9th Avenue for just under an hour. They are the most vocal of activists opposing the city’s plan to transfer 60,000 NYCHA units to private management.

They are just getting started, they say. But they are deeply at odds with members of the Fulton Houses tenant association, and causing headaches for those involved with the proposal who fear the protests are sabotaging the best and only hope for the deteriorating buildings.

According to NYCHA, Fulton Houses needs $168 million in repairs, including upgrades to gas risers, brick replacement and renovations of the playground and community center.

The buildings that would be demolished are low-rises that house 72 of the complex’s 944 units. Tenants would be relocated to a new building that would be constructed on the site of a current playground before demolition begins.

New high-rises with mostly market-rate apartments would be built in place of the demolished buildings. For the developer, the profits from these buildings would fund repairs at the complex.

The whole project would be bid out to a private company that would then operate the entire complex. Depending on how the deal works out, NYCHA says the new construction could potentially fund repairs at two other Chelsea developments.

Behind the protests is Fight for NYCHA, a new group that has sprung up to fight NYCHA’s Rental Assistance Demonstration plan, which would transfer 62,000 public housing units to the private sector. They’ve made their agenda an absolute rejection of NYCHA’s privatization plan, and have been organizing tenants in Fulton Houses since April.

They say the plan will lead to people losing their homes, and believe public housing should be kept public.

Marni Halasa, perhaps the most visible Fight for NYCHA member, was organizing tenants on Monday. She got her start in the Occupy Wall Street movement, ran for city council to call out Councilmember Corey Johnson in 2017, and was once called a professional protester by the New York Times.

The group has organized a significant number of NYCHA residents against the privatization plan. A petition opposing RAD and the demolition of any buildings in Fulton Houses has over 500 signatures, they say.

Their strategy is to direct their anger at elected officials, and few have been spared: Mayor de Blasio, Johnson, US Rep. Jerry Nadler and Borough President Gale Brewer are all in the pockets of big developers, they say.

“All of this is pretext for privatization and gentrification. It’s all about profits for the real estate industry,” says Louis Flores, the Fight for NYCHA founder who is also Halasa’s former campaign manager.

Other residents, however, argue that many of the group’s organizers don’t live in Fulton Houses—Halasa and Flores don’t—and say they are spreading misinformation, turning less-informed tenants against a plan that would significantly improve conditions at Fulton Houses for the long term.

“She lost and now she wants to use a political agenda, look for vulnerable people in a vulnerable situation and make it look like she’s a savior,” says Miguel Acevedo, who’s been tenant association president at Fulton Houses for 15 years.

There are legitimate concerns about RAD. Ocean Bay Houses in Queens, NYCHA’s premier RAD property, had the most evictions of any NYCHA development over a two-year period, City Limits reported last week. But NYCHA says this is the only way to fund significant repairs. The money just isn’t coming from the federal, state or city government.

The money is there, protesters say.

“Do we need $10 billion for new jails? Do we need $58 million that de Blasio is going to spend on bike safety?” says Halasa.

Most controversial is the plan to demolish two Fulton Houses buildings, an approach to public housing that other cities have taken but which has not happened in New York City.

“I respect the fear of the tenants in buildings that may be demolished, but if you live in one of the other buildings, all that’s going to happen is you’re going to get brand new apartments. And it doesn’t cost you a dime,” says Acevedo.

The demolition is absolutely necessary, NYCHA says. Making needed repairs will require the profits that would come from the market-rate buildings being planned for the two 9th Avenue lots.

Acevedo says he’s opposed to the demolition, but supportive of the overall plan because it’s the only option NYCHA has.

NYCHA has done some outreach with tenants and says more will be coming. Residents met recently with elected officials asking them to oppose the plan. Some officials then sent a letter to NYCHA asking them to delay the Request For Proposal seeking a private developer until December, while a working group is established.

“I think the communication with tenants has been sorely lacking,” said Sen. Brad Hoylman, who represents the district and said he’s against the proposal. “It is obviously alarming to tenants to hear that the buildings may be demolished without clear communication about what follows.”

The working group will be moving forward, but NYCHA says they won’t delay the RPF release. It is expected this fall.

One thought on “At NYCHA’s Fulton Houses, A Bitter Divide Over the Future of the Development”