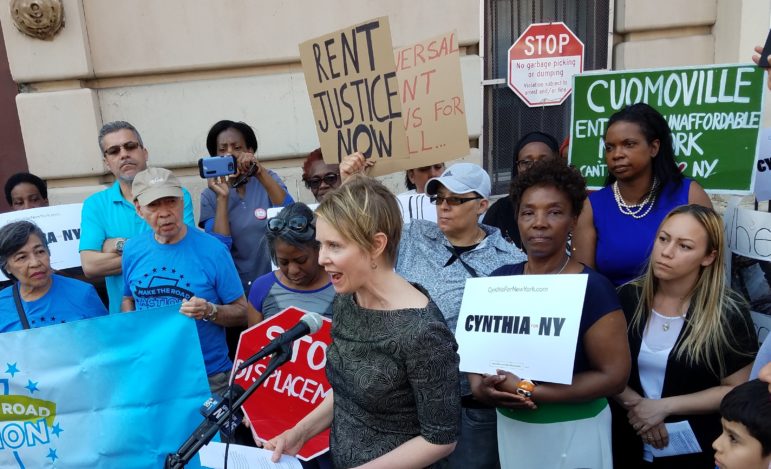 Nixon has blamed the governor for a lack of leadership on strengthening the rent regulations covering millions of New Yorkers.

As the September 13 Democratic primary approaches, City Limits is comparing the two gubernatorial candidates on the issues. Below is a brief examination of their positions on housing policy. Other articles in this series cover education, criminal justice and transit.

Over the last decade, the housing issue in New York state has transitioned from a talking point to a full-blown crisis where elected officials, bureaucrats and housing advocates are wrestling over possible responses. The housing agendas for Democratic gubernatorial candidates Governor Andrew Cuomo and Cynthia Nixon are similar but each candidate brings their own tailored experience to the issue.

Last month, CBS held a Democratic primary debate between Cuomo and Nixon, and both candidates covered a range of topics, trading jabs and cheeky remarks. But housing was not a major issue: Each candidate spent less than minute on their respective housing platforms in the last 10 minutes of the debate. Both candidates addressed homelessness and NYCHA briefly with within the last ten minutes of the debate.But housing has been on the table throughout the primary campaign. Cuomo’s has considerable background on housing issues. In 1986 he founded the state’s Housing Enterprise for the Less Privileged (HELP), which helps create affordable housing across the state. He then served as assistant secretary and eventually becoming secretary at the U.S. Department of Housing and Urban Development (HUD) under President Bill Clinton.

Actress-turned-candidate Nixon, who has been a activist on socio-economic issues including education, racial injustice and LGBTQ issues during her career, presented her housing agenda known as “Rent Justice for All” in May, addressing vacancy decontrol, rent stabilization and preferential rent issues across the state. It was among the first policy pronouncements issued by her insurgent campaign.

While concerns about homelessness and debates about affordable housing dominate the local political conversation, housing is not solely a New York City issue. Displacement concerns have sparked a community land trust movement in Buffalo. Suburban Long Island is in the grips of a foreclosure crisis. And recent changes to federal tax law mean property taxes, based on the worth of one’s home, could become a heavier burden to families outside the five boroughs.

With those stakes in mind, here’s a look at what the Democratic contenders have said or done about housing:

Nearly a million apartments in the city and several thousand in other urban areas in the state are under rent stabilization, which requires landlords to change rents in accordance with guidelines passed by a local board, in the city’s case the Rent Guidelines Board. Rent-stabilized units are seen as a key bulwark against displacement, but tens of thousands of these apartments have disappeared from the program under changes in state law in the 1990s.

Four features of the rent-stabilization system have been in the spotlight in recent years. One is high-rent or high-income vacancy decontrol, by which a rent-stabilized unit leaves the program if its rent exceeds $2,700 or the tenant-household’s income exceeds $200,000. Another is the vacancy bonus, which allows landlords to boost rent by 20 percent every time a lease changes hands. A third is preferential rent, which is when an owner charges less than the legal rent–creating the threat of a sudden, massive increase in rent far larger than the year-to-year increases approved by the rent guidelines board. Finally, Major Capital Improvements are when property owners increase rents based on the costs of improvements or installations to a building: tenant advocates say these increases often end up generating far more revenue–at the tenants’ expense–than the MCI cost.

During his nearly eight years in office, Cuomo has signed legislation raising the income threshold for decontrol from $175,000 to $200,000 and the rent threshold from $2,000 to $2,700, with future increases indexed to the percentage increases in rents on one-year leases approved by the Rent Guidelines Board. The vacancy bonus was limited to one use per calendar year. The two rent law renewals approved by Cuomo (in 2011 and 2015) also tightened up the rules on how landlords pass the costs of individual apartment improvements and major capital improvements on to tenants. Moving forward, Cuomo’s campaign says the governor wants to end vacancy decontrol, make preferential rent the legal rent, make the surcharges for apartment and building improvements temporary rather than permanent, and “further limit or eliminate vacancy bonuses to ensure landlords aren’t rewarded financially for schemes to force tenants out.”

Nixon: wants to end vacancy decontrol, vacancy bonus and preferential rents altogether. She wants to revisit the legislation behind capital improvements to allow temporary support for landlords so they may make repairs but also prevent tenants from bearing the rent burden and Nixon wants to change how the state housing agency reviews the extent and quality of renovations before approval. Nixon wants to expand rent stabilization for those who live in units built after 1974 (now exempted from the program), or live outside of the eight counties (the city’s five boroughs, Westchester, Rockland, and Nassau counties) and wants to bring in legislation to protect tenants living in homes smaller than six units but are owned by corporate property owners. She has also talked about trying to re-regulate units lost from the stabilization program in recent years.

While pro-landlord organizations say the issue is overblown, there has been increasing concern by tenant advocates that landlords seeking higher rents might try to force tenants out of rent-stabilized housing, through deliberately intrusive construction, purposefully neglected maintenance and other tactics.

Cuomo: would like to increase monetary penalties imposed on landlords who harass tenants by approximately $1,000, to $3,000 for each offense and up to $11,000 for each offense where the owner harassed a tenant to obtain a vacancy. Cuomo created the first state Tenant Protection Unit to audit and investigate landlord wrongdoing and has given additional funding to state housing programs such as the Department of Homes and Community Renewal which functions to build, preserve and protect affordable housing and increase home ownership across the state.

Nixon: wants to expand protection against unjust evictions across the state — her goal is to provide protection for 9 million renters — through just cause legislation and increase funding for DHCR and its’ tenant protection programs

Earlier in the year, Cuomo declared a state of emergency at the New York City Housing Authority, where an estimated 400,000 people live and ordered an independent monitor to oversee and expedite repairs to the agency’s deteriorating buildings. The executive order came after Cuomo visited a Bronx housing complex and found unlivable conditions, including cases where NYCHA residents were left without heat and/or water.

During last week’s debate, Cuomo emphasized the state’s $20 billion dollar plan to create, preserve and develop thousand of affordable units but added that the biggest problem was NYCHA, “NYCHA housing is a national disgrace — we are using thousands of units in NYCHA and that is one of the main problems.”

Nixon visited NYCHA housing complexes and met with residents soon after the Cuomo’s announcement and said the state and city had failed NYCHA residents on every level — calling the conditions a “health crisis”, according to the New York Daily News. While the city has significant authority over NYCHA, its funding has primarily come from the feds, and all three levels of government cut back funding during the early 2000s.

In 2017, Cuomo launched a five-year, $20 billion housing plan aimed at creating 100,000 affordable units, with many targeted to the homeless.

Additionally under the Cuomo administration, the 1971 421-A tax abatement program for developers was revamped in 2016. The program gives developers a tax exemption for building a multi-family residential project. The key changs Cuomo made to the program was the establishment of construction wage minimums for some project built with the tax break. While the real-estate industry welcomed the resumption of the program after a brief pause, many housing advocates believe it is an inefficient way to build affordable housing.

“421-a does little to actually create affordable housing, with 79 cents of every 421-a dollar spent going to luxury development, and only 11 cents going to support affordability,” the Association for Neighborhood and Housing Development said in a blog post after the new version of the law was approved. “A growing body of evidence suggests that the 421-a exemption doesn’t even accomplish the most minimal public purpose of incentivizing new market-rate development.”

Nixon’s campaign said that Cuomo’s time in the Governor’s house has only led to a increase in homeless people in the state, “Since Governor Cuomo entered office, our state’s homeless population increased by 36 percent. Under Cuomo, there’s been a steady withdrawal of state resources and a worsening homeless crisis each year. After being pressured to address the crisis, Cuomo initially promised 20,000 units of supportive housing in 2016 and then changed to 6,000 units.”

How experts see the housing agenda:

Rafael Cestero, president of Community Preservation Corporation, a lending nonprofit for affordable housing developments, and former commissioner for the city’s Department of Housing Preservation and Development, says some of the changes the candidates call for are feasible, but others warrant caution.

“I don’t know if they will ever get to eliminating [vacancy decontrol] but certainly bringing it down to a more reasonable 5 percent or 10 percent on vacancy turnover will have a huge impact. That one change in of itself will have an enormous impact in a couple of ways. One, it would stop the gaming of the system to generate turnover in units because you wont get the 20 percent bump. And two, obviously it would keep rents lower,” he says. “The one thing I would caution everyone about is major capital improvements should go away once the costs are recovered. We have to face facts — we are not going change the real estate market in New York from being a capitalist system. The owners have to have some incentive for investing in their buildings.”

Cestero said the same policies that work for New York City do not work for most cities and towns in Upstate New York, “A universal rent policy that is going to work in Brooklyn and Buffalo is a real mistake and will have a negative economic impact on upstate New York.”

Tom Angotti, professor for Hunter College in Urban Policy and Planning, rent laws are only the surface of the real housing problems across the city, issues starting from homelessness to NYCHA were all part of the housing crisis, “I think [rent laws] have been long time demands of the tenant movement and it would be a good first step but there is more to be done. There needs to be a comprehensive overhaul.”

Angotti said Nixon did not have a track record on housing, while Cuomo, had both a problematic relationship with the real-estate industry (its members have been major donors to his campaigns) and a record of backing good ideas, like supportive housing.

“A habitat is not just a roof over your head. It’s community and everything that goes into making the quality of urban life,” Angotti said.