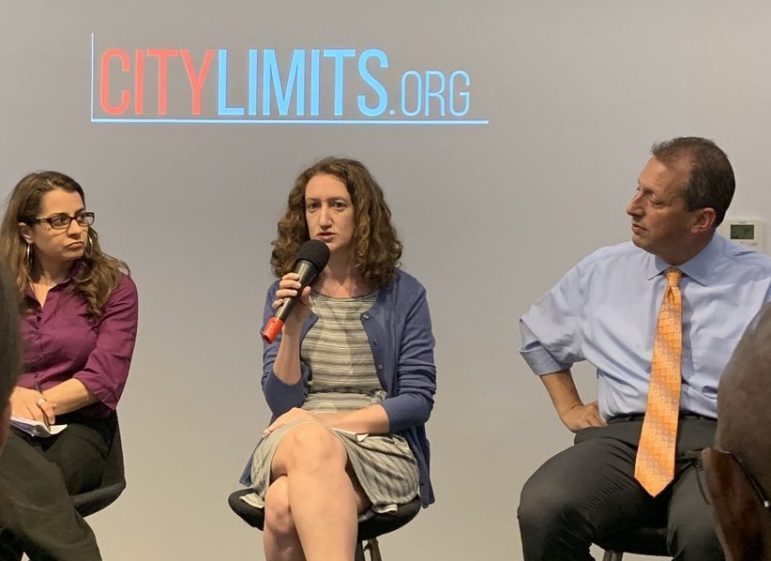 From left to right, Sandra Lobo of NWBCCC, Emily Goldstein of ANHD and Councilmember Brad Lander.

On paper, New York City’s system for planning how to use land looks pretty good. A careful environmental study is undertaken before zoning changes or other policy tweaks are sought, with public comments welcomed at key points. Then local community boards and borough presidents get chances to weigh in, and either endorse or reject the plan wholesale, or recommend ways to change it. Final decision-making occurs in the Council, a 51-member body built to balance citywide needs and individual district perspectives. And in practice, the current approach has plenty of defenders, who point to the city’s strong economic growth as evidence that something is working right.

There are, however, those who disagree.

“The current system exacerbates our worst selves rather than our best selves,” Brad Lander, a Brooklyn Councilmember, told a City Limits panel Thursday night that explored whether New York City needs a comprehensive plan – a citywide commitment to evenly distributed growth, equitable investments, fair sharing of infrastructure, and resiliency in the face of climate change.

The 2019 Charter Revision Commission so far has dismissed calls for a wholesale redesign of the way the city plans, a system comprised of the Citywide Environmental Quality Review (CEQR) and the Uniform Land Use Review Procedure (ULURP).

At Thursday’s event, the panelists discussed that current, piecemeal approach to land-use decisions—done largely through neighborhood and spot rezonings—and the impact it’s having on housing and other resources. Lander, who represents Brooklyn, cited how this contrasts with the tactics of cities like Minneapolis, which last year voted to eliminate zoning for single-family homes in the city as a whole in favor of zoning for higher density.

“I do battle with lots of my friends in the tenant organizing, tenants’ rights and affordable housing world, who in some cases have become so understandably traumatized by displacement that the bar set for development is hard to imagine you could hurdle,” he said.

Zachary Bernstein, a zoning attorney who serves on the board of the Real Estate Board of New York, noted that both the Bloomberg and de Blasio administrations have produced strategic documents that provided a citywide vision to guide neighborhood-by-neighborhood planning. Mayor Bloomberg issued PlaNYC to map sustainability and growth, and New Housing Marketplace to generate 165,000 or so units of new or preserved affordable housing. Mayor de Blasio issued OneNYC and Housing New York to serve the same ends.

But Emily Goldstein, director of organizing and advocacy at the Association for Neighborhood and Housing Development, argued that the de Blasio administration’s rezoning tactics “is never being applied in a consistent way across neighborhoods and across the city.”

Nine of the 10 neighborhood rezonings pursued by the de Blasio team have targeted low-income communities of color. There’s been a shifting rationale by the city for where zonings were sought— whether the targeted locations shared key planning attributes like modest density and good transit access, or just that they were the places without the political power to say no. “If the justification for where rezoning is happening is transit corridors, then you have to ask why Forest Hills isn’t being rezoned?” Goldstein asked. “There are many neighborhoods that are left alone. To preserve their character. They have great transit access and single family homes.”

Stephen Smith, of Open New York, said he thinks New York would benefit if it lawmakers in Albany imposed more comprehensive requirements for the creation of new housing across the state, pointing to places like New Jersey, where the government will “often step in and override municipalities” that are reluctant to build.

“There are plenty of towns on Long Island that have not produced a single apartment since I’ve been alive,” he said. “If you are not building new housing then those market rents will just continue to go up and up and up.”

Sandra Lobo, the executive director of the Northwest Bronx Community and Clergy Coalition, discussed her group’s experiences with the Jerome Avenue rezoning, and the frustrations over the limitations of the environmental impact statement that is supposed to identify potential problems from a rezoning and commit developers and the city to mitigate them, but—critics say—rarely does either. “Despite brining out thousands and thousands of people throughout those three-and-a-half years, providing both quantitative and qualitative evidence, the eventual EIS statement was very limited,” Lobo said.

7 thoughts on “Video: Does NYC Need a Comprehensive Plan?”