Why Are Reports of Subway Sex Crimes on the Rise? 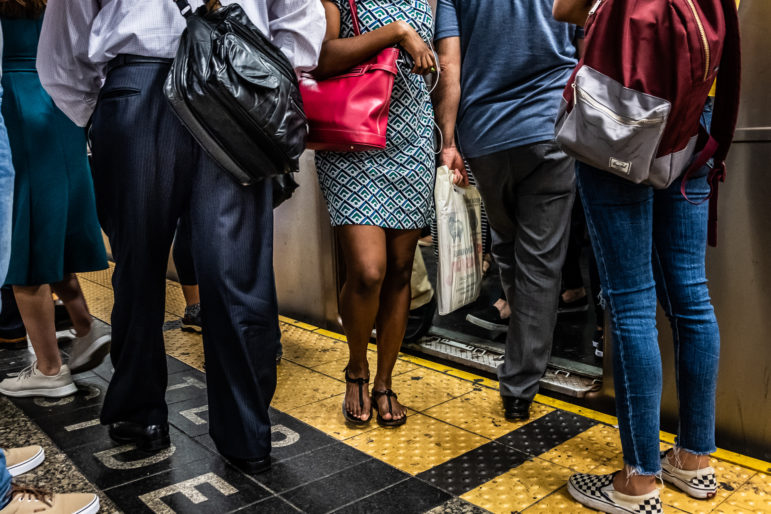 The number of reported sex crimes in the New York City subway system increased last year for the fourth year in a row—an uptick attributed to a rise in public awareness that’s led to more victims coming forward, experts say.

Subway sex crimes are nothing new: a New York City detective in 1953 declared the crowded subway system “a fine place for sex offenders,” according to a news story at the time. But experts and advocates say the rise in the number of incidents over the last few years is likely not from an increase in actual crimes, but in more victims coming forward to report them—many inspired by public awareness campaigns and the growing number of survivors who’ve shared their own stories as part of the #MeToo movement.

“Women, and people in general, are starting to realize that they have agency over their space, their body, and feel comfortable coming out and sharing, ‘Hey, this is happening to me,'” says Maliyka Muhammad, a board member with the nonprofit Stop Street Harassment. “‘This is my body. I don’t have to tolerate it, and I don’t have to keep silent when it happens.’ People are starting to feel empowered.”

The MTA and the NYPD have urged more subway victims to come forward, too, in recent years. In 2014, the MTA created a website so victims can report incidents of subway sexual misconduct online, while the NYPD launched an awareness campaign in April encouraging New Yorkers to report sex crimes to the police. General sex crime numbers show an uptick similar to those on the subway: citywide, rapes are up 30.5 percent so far this year compared the same period in 2017, while misdemeanor sex crimes are up by 10.4 percent, according to NYPD’s most recent statistics.

“[It] has really shifted the way so many systems respond, and just the way that our society and individuals respond,” says Maureen Curtis, criminal justice programs vice president for the anti-violence group Safe Horizon, who says she’s seen a dramatic change over the years in how New Yorkers regard subway sexual misconduct.

“That was almost expected years ago—that there was really nothing you can do about it. It wasn’t something you could really report to the police,” she explains.

“The reason why you’re seeing an increase in reported crimes is because people are able to now report it,” she says. “Years ago, people would just deal with it, they would discuss them. If they were lucky enough that they didn’t get touched, they would just say they ‘dodged a bullet.'”

In recent interviews conducted with riders on the subway, City Limits found that many women were not so lucky in dodging that bullet.

“Probably everyone in my social circle has been sexually harassed at least one time in their life,” says Daisy, who spoke to a City Limits reporter at the West 96th Street subway station, but declined to give her last name. When she was a teenager, there were instances when older men would push up against her on the train, she recalled.

Forcible touching accounted for nearly 45 percent of the sex crimes committed on subways during the first five months of 2017, according to a report from Savino’s office, which looked at cases reported to the NYPD’s Transit Bureau from January 1 to May 28. Public lewdness was the next most common subway sex crime, making up 43 percent of those reported.

Two women told City Limits in recent interviews that they’ve received unwanted photos of genitalia from strangers while riding the subway through the iPhone’s “Airdrop” feature. When turned on, “Airdrop” allows Apple users who are near one another to send and receive images through Bluetooth, even without the person’s contact information. There is an option to decline the photo, but it will still appears on the user’s iPhone (the feature can also be turned to ‘Contacts Only,’ which will limit sharing capabilities to users in your contact book.)

“I have friends who don’t feel comfortable taking the subway alone at night or sometimes during the day,” says subway rider Susannah Greenblatt. Greenblatt herself has been harassed multiple times both on trains and on the platform. She says she didn’t report the incidents.

“You usually aren’t in the mood to deal with that,” she explains. “I don’t have a lot of faith in the powers that be to handle that kind of stuff.”

The NYPD and the MTA have made efforts in recent years to address subway assaults. The MTA’s online sexual misconduct reporting site—launched in October of 2014 with the assistance of New York City Alliance Against Sexual Assault, The New York City Anti-Violence Project and police—received more than 500 complaints in its first two years, according to Savino’s report.

The site allows victims of sexual misconduct to report directly to the NYPD any information of an incident, and gives the option to attach photos or short videos to aid police in identifying the offender.

In April, the NYPD began a public awareness campaign entitled “The Call is Yours” which encourages sex assault victims to come forward.

“It’s letting people know that we are treating this seriously,” says Curtis of the campaign’s message. “If you report it, it will be investigated and looked into.”

The NYPD has also made changes to the way it investigates subway sex offenses in the last few years, shifting the jurisdiction for such crimes from its transit squads to the Special Victims Division. In 2016, the department established the Transit Special Victims Squad to specifically handle sex crimes committed in the transit system.

That change has made it “a little easier for folks” who decide to report subway sexual misconduct, since the officers handling the cases are specially-trained in working with victims, according to Josie Torielli, assistant director of intervention programs at the NYC Alliance Against Sexual Assault.

The new arrangement is also less confusing, she says, as it had sometimes been unclear previously which NYPD Transit District riders were supposed to report to.

“The last thing that someone needs when they do make a decision to report is confusion,” Torielli says.

However, most of those who experience sexual misconduct on the subway aren’t reporting it to the police, according to NYPD correspondence. In a 2016 letter—included in a Department of Investigation report on understaffing in the NYPD’s Special Victims Division—the SVD’s commanding officer estimated that just 5 to 10 percent of subway sex offense victims actually file a police report.

“Oftentimes the trains are crowded during peak offender hours and the victim is not able to easily find a Police Officer,” the letter states. “Other times the victims are traveling and don’t have the time to stop and make a formal complaint.”

Torielli says it’s important victims are “able to do the things that make the most sense for them following an act of sexual violence.” That includes exploring options and resources outside of the legal system, like support groups and counseling. The Alliance offers information for how to access these kinds of services on its website.

While more people reported subway sex crimes over the last few years, the percentage of offenders arrested for them is on the decline, according to NYPD data.

In 2014, for example, police made arrests in 403—or 65 percent—of reported subway sex cases. The next year, arrests were made in about 55 percent, or 403, of 738 incidents, according to numbers included in Savino’s report.

Savino says the nature of subway sex crimes is, in part, what contributes to making the crime tough to eradicate. She’s been pushing for the last few years to toughen penalties for subway sex offenders, saying those who commit these crimes tend to commit them more than once.

About one-third of those arrested for subway sex crimes have a prior sex crime arrest in their background, according to the report her office released last year, which theorized that many of the NYPD’s unsolved cases “are likely caused by repeat offenders.”

In January of 2017, Savino introduced bill S.3861, which would elevate forcible touching on the subway from a misdemeanor to a class D felony, punishable with up to seven years in prison. The bill would also increase the penalty for public lewdness on public transit from three months to one year in prison.

“They are not just perverts, they are predators and should be prosecuted as such,” Savino says. “If you’re in prison, that makes it hard to commit a crime again.”

Despite passing in the State Senate twice, the bill died in the Assembly last year and has stalled in that chamber this year.

Some critics worry the bill could have unintended consequences. David Mirsky, a criminal defense attorney with offices in Queens and Long Island, thinks the legislation could put “political pressure” on the NYPD who would in turn “respond with their own crackdown on subway crime.”

“It’s a situation where even innocent people are more likely to be arrested,” he wrote in a blog post last year about Savino’s proposal, in which he argued that innocent commuters could be mistakenly identified as a groper, or that physical contact in a crowded subway car could be misinterpreted.

“You have people who fall on the subway and reach out for the pole,” Mirsky told City Limits. “The train moves, somebody falls, somebody’s screaming.”

“Not necessarily by confronting the person who is doing it, but making sure that [the victim] is okay. Making sure they feel supported,” says Torielli. “It can be really validating for someone to notice and say, ‘Hey that wasn’t okay. Are you okay?'”

3 thoughts on “Why Are Reports of Subway Sex Crimes on the Rise?”