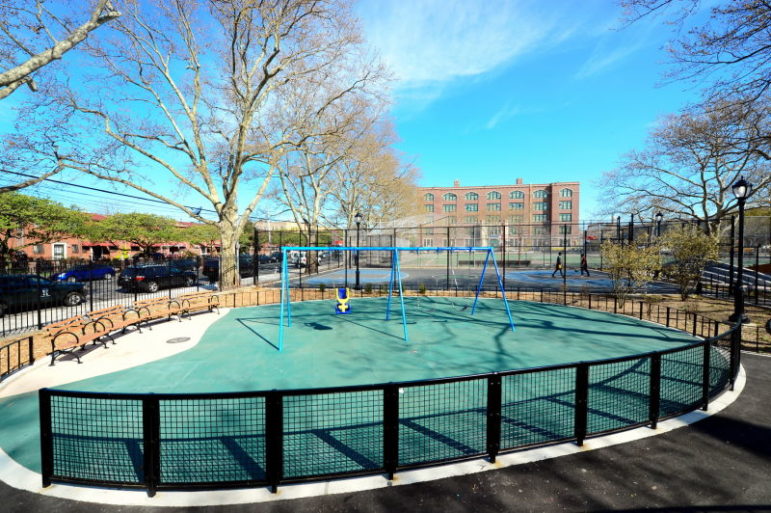 Brownsville in Brooklyn and Southern Boulevard in the Bronx are communities plagued by insufficient parkland and unacceptable park conditions, according to new reports from New Yorkers for Parks, an independent citywide research and advocacy organization.

In the assessment of each area’s open space, Brownsville failed 10 of the 14 open space benchmarks. Southern Boulevard failed 8 of the 14, rising to 11 out of 14 when Crotona Park, which many residents have difficulty accessing, is excluded. Benchmarks include total amount of open space, access, tree canopy and overall maintenance, according to the report.

“Quality open spaces are important for all New Yorkers, but particularly in areas where parks are suffering from years of neglect,” said Lynn Kelly, Executive Director of New Yorkers for Parks in a press release. “These communities have responded with clear and comprehensive plans for what they need from their open spaces, and with this data their advocacy will be even stronger. These reports also present an opportunity for the city to continue its fantastic work on park equity, and to building more livable neighborhoods in every corner of every borough.”

Covering Brownsville:
2017: Death Disparities
Brownsville on the wrong end of the city’s stark health inequality
2013: The Five Borough Ballot
We reported on the 2013 mayoral campaign as it looked from the Van Dyke Houses.


The Southern Boulevard area, which encompasses the Crotona Park East and Longwood neighborhoods, is currently being studied by the Department of City Planning for a possible rezoning. This month, the DCP released its survey results from the community about issues they want addressed in the study.

New Yorkers for Parks is especially concerned for the Bronx because of the high asthma rates in the borough. A 2014 study by the state comptroller found that the Bronx had the highest asthma death rate across the state. In the Bronx, there were 43 deaths per million residents; the state average is 13 deaths per million, according to the 2014 study. Parks can’t solve the asthma problem, the group acknowledges, but they do promote exercise and general improvements in health.

The Southern Boulevard index report’s recommendations to the city include expanding the Community Parks Initiative in conjunction with the Anchor Parks Initiative to revitalize neglected parks; increasing access to local waterfront parks; ensuring funding for maintenance support is adequate for existing and in-construction parks; increasing programming and organized activities; and providing funding for forestry services inside and outside parks.


DCP also indicated last week that the city had already begun the process of turning Sheridan Expressway from a major highway into a boulevard. The city’s Department of Transportation at the open house event said the proposal includes removing barriers and establishing three traffic-signal-controlled crosswalks to allow for pedestrians to have direct access to new parks on the waterfront. Proposed access ramps from the Bruckner into the Hunts Point area are supposed to keep truck traffic off residential streets to minimize its impact on the surrounding community.

But New Yorkers for Parks said the proposed off-ramps from the Bruckner Expressway would shadow newly-built waterfront parks along the Bronx River, decreasing access to these parks and increasing local air pollution. For this reason, the group recommended the city support the community’s vision to place the ramps elsewhere.

In Brownsville, a $30 million investment in Betsy Head Park and renovation of the Brownsville recreation center through the city’s Anchor Parks initiative, will help mitigate some of the issues in the index report. Although New Yorkers for Parks said the investment in both facilities is fantastic, its closure could affect 18,000 young people that depend on the park programs and centers.

The Brownsville index report recommends an increase in programming and access to open spaces especially for the youth; more NYPD engagement; pair NYCHA development with improvements to NYCHA open spaces; additional funding to renovate and maintain Betsy Head Park pool a, to direct funding from the state’s Vital Brooklyn plan for affordable housing in private construction projects to include maintenance of Brownsville spaces and encourage public open spaces in those projects.

The Open Space Index reports can be read here.