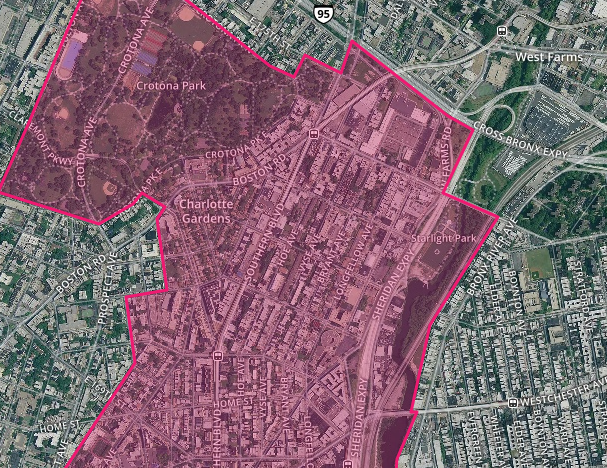 Part of City Planning's community survey is an interactive map where respondents can pinpoint what they like or want to change in the neighbordhood.

At an open house on Thursday that was briefly disrupted by protest, the Department of City Planning revealed results from a community survey conducted as part of the Southern Boulevard Neighborhood study for a possible rezoning.

The survey stems from DCP’s current Southern Boulevard Neighborhood Study, one of several neighborhood rezoning studies launched as part of city’s affordable housing program. In it, the city says it intends to follow through on several prior planning initiatives. These include the 197a local master plan that Community Board 3 drafted in 1993 (which focuses on affordable housing for varied income groups, and an accessible greenway along the Bronx River waterfront), a parks department plan to improve Crotona Park, and a city plan to transform the Sheridan Expressway into a pedestrian-friendly boulevard with multiple crossing points.

In the 1960s, the area deteriorated after the city, under planner Robert Moses, demolished thousands of tenements to construct the Cross Bronx and the Sheridan Expressways. Between 1970 and 1980, it was also one of the communities worst hit by the Bronx arson crisis when 15,000 housing units were lost to fire in Crotona Park East.

According to the DCP, the study area encompasses the Crotona Park East and Longwood neighborhoods and covers Southern Boulevard between the Cross Bronx Expressway and East 163rd Street including the Bronx River and Crotona Park. The study covers more than 130 blocks and spans parts of Bronx Community Districts 2 and 3, and a small area of CD9.

The DCP estimates the area is home to almost 60,000 residents and approximately 17,000 existing residential units. Most of the residential buildings are one- or two-family homes, multi-family walk-ups and multi-family elevator buildings in R7-1 zones, which allow for additional development on a property.

“This is really in its earliest stages of the plan and we are trying to get a sense of the community and understand their needs and goals for their neighborhood,” said Carol Samol, Director of the Bronx Office of the Department of City Planning, at the open house. “We are in the information-gathering stage and are looking forward to the community workshops in the fall.”

The survey came from 973 individual comments since November 2016, according to the DCP. The largest concern, expressed by 23 percent of respondents, was streets and transportation; 14 percent said it was retail and business; 13 percent, housing; 12 percent, parks and open space; 10 percent, community and diversity; 8 percent each for security and for health, and 7 percent for youth programs, according to the survey.

Some stakeholders and residents are excited about the possibility of changes coming to the neighborhood. But some community members are concerned about residents becoming displaced, including Bronx resident Harold DeRienzo, president of Banana Kelly Community Improvement Association. DeRienzo asked Department of Housing Preservation and Development representatives questions about affordable housing at the open house.

DiRienzo asked about how housing and affordability would be determined and HPD said that it was too early for details into the possible options the area. But HPD did say the making the area affordable for all incomes was important to them and part of the overall city plan.

“We come from the standpoint where we want to be at the table,” said Gregory Jost, Director of Organizing at Banana Kelly CIA. “However, we have a healthy skepticism about the whole process.

DeRienzo was not alone in his concern. A protest broke out in the middle of the open house by a group affiliated with the Bronx Social Center, whose members yelled out that the city was displacing minorities through rezoning in every affordable neighborhood in across the five borough.

“Let’s call this rezoning for what it is. This plan is state sponsored housing discrimination for poor, black, brown, people of color, communities, immigrants,” yelled one of the protestors. The group invited public to join them in their own rezoning plan.

Other residents watched the group with some interest, but some were excited about bringing change into their neighborhoods.

“I have lived here for 10 years and I hope some of these things do happen. I am excited about Sheridan changing — that looks like a good plan and we will be able to go to the park,” said Justine Rivera, a resident. “But I also do not want this area to become gentrified. I just want it to be nice for my community.”

One project that has already started is the long-awaited change to the Sheridan Expressway. The plan is to transform the expressway into a pedestrian friendly main street, according to the Department of Transportation. Part of the 2013 transportation study, the DOT plan, projected to cost an estimated $97 million, will include signalized intersections, a new planted median, pedestrian crosswalks, new street lighting and traffic signals, drainage, pavement striping and landscaping and a new pedestrian bridge constructed for access to Starlight Park. New York State currently maintains and operates the expressway and is working with DOT to change ownership, according to the DOT.

DCP is continuing the survey online here The department plans to start workshops to dive deep into some of the issues in the community as part of the Southern Boulevard Neighborhood study in the fall of this year.