Video: Highlights from ‘New Yorkers Under the Gun’

By Sneha Dey and Harry DiPrinzio . 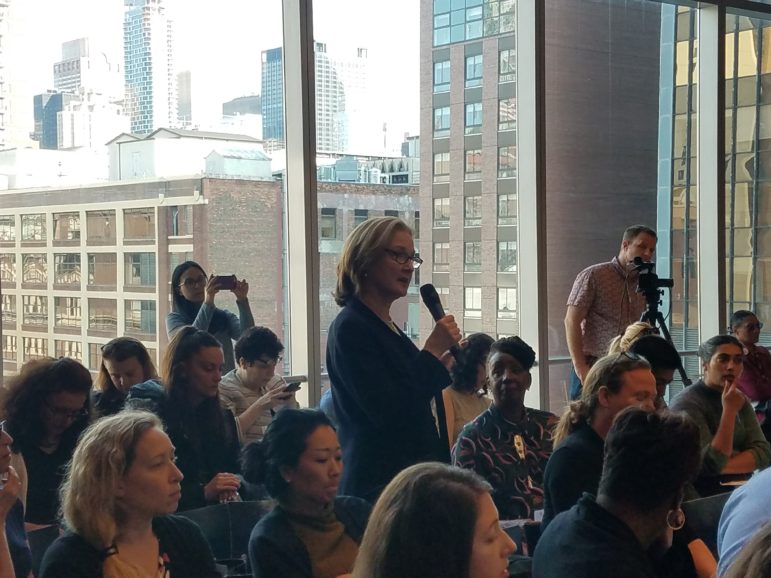 An audience question at the June 7 panel.

“New Yorkers Under the Gun,” a panel this Thursday on gun laws and anti-violence policy at John Jay College of Criminal Justice, hosted by City Limits and The Crime Report, featured policymakers and advocates discussing how New York City, with its tough gun laws, success in reducing violence and persistent pockets of violent crime, might be affected by the renewed national debate about guns after the Parkland, Fla., school shooting.

Below are some highlights from the discussion:

Nicholas Suplina, director of criminal justice policy and enforcement at Everytown for Gun Safety, explains how states have responded since the Parkland shooting, and why action on just the state level is not enough.

“Even though crime, particularly shootings, are reduced so much, we see that the neighborhoods where crime and particularly that violence happen, are the same that they were in the 1990s,” said Liz Glazer, director of the Mayor’s Office of Criminal Justice.

Heidi Hynes, director of the Mary Mitchell Family and Youth Center in Crotona, says gun violence must be considered part of a larger conversation about violence, such as discriminatory housing policies and defunding social services.

“The public discussion is going one way, but the politics in Washington D.C. is going the other way,” said Michael Palladino, head of the Detectives’ Endowment Association, who says the Concealed Carry Reciprocity Act would create “a law enforcement nightmare,” if passed.