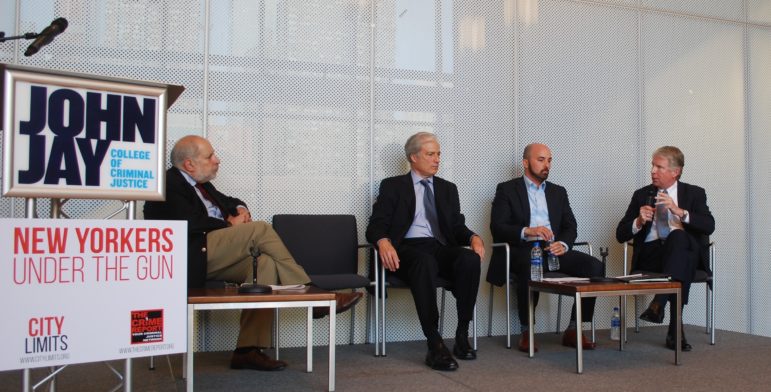 Stephen Handelman of The Crime Report, at left, leads a conversation with Richard Aborn of the Citizens Crime Commission, Nick Suplina of Everytown for Gun Safety and Manhattan District Attorney Cyrus Vance.

When it comes to violent crime, New York City has come a long way from the bad old days. The murder rate in 2017 was at its lowest point in several decades — 290 such deaths, compared to a high of 2,245 in 1990 — while the number of shootings clocked in at 789 incidents, another historic low, officials said.

And in a city and state with arguably strict gun laws, New York can sometimes feel insulated from the firearms debate raging across the country. But shootings persist — particularly in some of the city’s most disadvantaged neighborhoods — prompting advocates and law enforcement to devise new ways to combat violence. Meanwhile, proposals to change gun policies on the state and federal level have the potential to impact what’s happening here, experts say.

“New York is a miracle in terms of the ability to have reduced gun violence. It is literally a miracle,” Manhattan District Attorney Cy Vance said Wednesday during “New Yorkers Under the Gun,” a panel on gun laws and anti-violence policy at John Jay College of Criminal Justice, hosted by City Limits and The Crime Report. “I would not want to do anything to turn the clock back to those days when guns were all over the city and people were being killed.”

To Vance, co-founder of the Prosecutors Against Gun Violence coalition, the biggest threat to New York City when it comes to gun policies is the Concealed Carry Reciprocity Act, a bill under consideration in Washington, D.C. that would allow gun owners who legally carry a concealed weapon in their home state to legally do so in other states as well — despite the fact that different states can have very different licensing requirements.

“West Virginia, for example, has virtually no gun laws. And so a West Virginian could bring his or her weapon, or many weapons, to the city of New York,” Vance explained, calling the bill the National Rifle Association’s “number one legislative priority.”

“It doesn’t take much imagination to understand that that’s a dangerous thing. We are not like West Virginia. We are not a rural community,” he said, noting that millions of visitors from other parts of the country visit the city each year. “That is going to increase violence in New York City. We can’t have hundreds of thousands of guns coming into Manhattan without having an increase in risk to public safety, and increase of use of those firearms.”

Watch it: New Yorkers Under the Gun


Richard Aborn, president of the public safety non-profit Citizens Crime Commission, says it is the lax gun laws in other states that create a threat for New Yorkers. A 2016 report by the state attorney general’s office found that 74 percent of the guns recovered by law enforcement in New York came from other states.

“You see much higher rates of gun violence on a per capita basis in those states that have very weak gun control laws,” said Aborn, who said he would like to see a comprehensive set of federal gun laws passed so that “the conditions under which one could get and carry a gun are uniform.”

“The lack of that allows states that surround jurisdictions like New York or Chicago or Boston or New Jersey to be flooded with guns that come from outside of the city and outside of the state,” he said.

And while the Parkland shooting has ushered in a new wave of activism around gun control, experts say the passage of meaningful federal legislation is unlikely at the moment.

“The public discussion is going one way, but the politics in Washington D.C. is going the other way,” said Michael Palladino, head of the Detectives’ Endowment Association, who said the Concealed Carry Reciprocity Act would create “a law enforcement nightmare,” if passed.

Nicholas Suplina, director of criminal justice policy and enforcement at Everytown for Gun Safety, says the lack of legislative action is largely due to the National Rifle Association (NRA) and its fierce lobbying efforts.

We’re currently seeing “the most entrenched control of our elected officials by the National Rifle Association and the gun lobby,” he said during Thursday’s panel. “I don’t predict that changing with the current makeup.”

“The NRA is going legislature by legislature,” added Vance, pointing to states like Missouri, which passed a bill last year to allow most residents to carry a gun without a concealed carry permit.

There are signs, though, that the tide may be starting to turn, Suplina said. In the wake of Parkland and other recent mass shootings, a number of states have passed new gun laws, including traditionally firearm-friendly places like Florida.

Public outrage over gun violence is also driving new voters to the polls, he said. 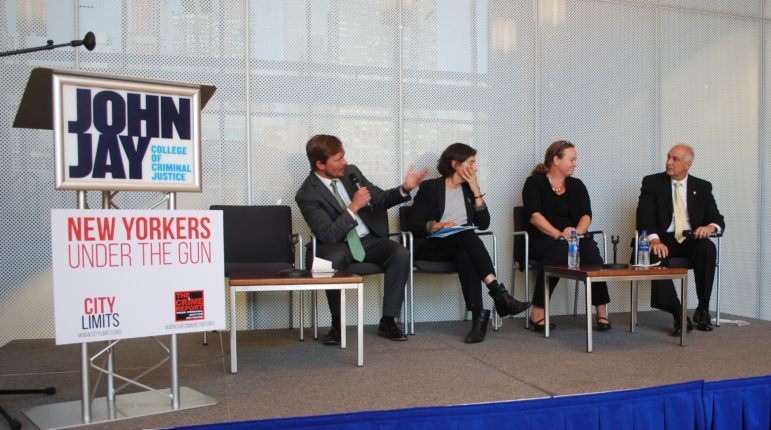 While much of today’s public discourse on guns is focused on school shootings, advocates say there’s still plenty of work to be done when it comes to urban gun violence that’s less headline-grabbing — even in New York City, which officials hail as safer than ever.

Gun violence persists particularly in neighborhoods where it’s historically been an issue, like East New York and Mott Haven, said Liz Glazer, director of the Mayor’s Office of Criminal Justice.

“If you were to look at the top 10 precincts that occupied the top of the shooting roster in the early 90s, and look at them last year, over half of them are the same,” she said. “And if I were to show you maps of where high asthma, high unemployment, low educational achievement is, it would be those very same neighborhoods.”

That knowledge has advocates and the city trying different approaches to combating guns than what was done in the past, when tactics primarily relied on law enforcement.

“You simply can’t arrest your way out of this. We wish we could. We tried that,” said Heidi Hynes, director of the Mary Mitchell Family and Youth Center in Crotona, an area that’s seen its share of violence — including a shootout in 2009 right next to the facility’s backyard, where children in the center’s after-school program were playing.

One of the newer tactics officials and advocates have adopted is the “Cure Violence” model, which treats gun violence as a public health threat, or disease. The city has built that model into its Crisis Management System, an anti-violence initiative which is now being used in 19 neighborhoods across the city that account for more than 50 percent of the city’s shootings, according to Glazer.

The initiative deploys “violence interrupters” to mediate street conflicts in order to prevent them from escalating, but also focuses on other, more holistic issues, including employment and mental health services.

“This intersection of violence and poverty is very real, and the antidote to it, are all these other things, which are work, play and a decent place to live,” Glazer said.

Hynes agrees, saying that any conversation about violence has “to start with the violence that is done sometimes even by the government to the people.”

“It is violence when we create housing policies that don’t allow people of color to get mortgages, or we defund a neighborhood,” she said.

Even today, in a New York City’s that’s ostensibly the safest it’s been in decades, gun violence endures.