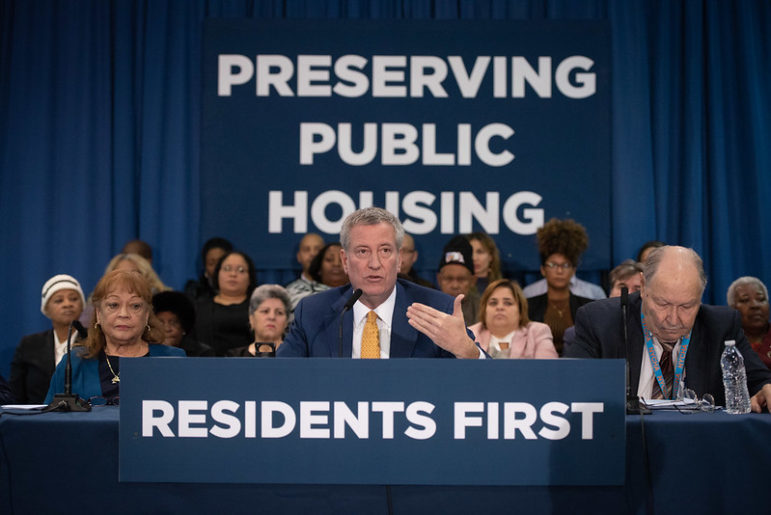 In December 2018, the second and seemingly final installment of NextGeneration NYCHA (NextGen) was announced. This version includes three mechanisms that the city claims will address the housing authority’s financial deficits, failing infrastructure, and deteriorating living conditions. These mechanisms invite private developers to build on NYCHA’s campuses, convert units to private management, and allow private developers to purchase untapped air rights hovering over some public housing buildings. The city claims this plan will generate $24 billion to fix vital repairs, and secure a future for public housing that would otherwise not be possible. In a Star Wars-esque fashion, the city says, NextGen, you’re our only hope.

I do not share the city’s assuredness. My fears stem from an understanding of how the goals of NextGen become skewed when we look at them in the broader context of how affordable housing has been managed in New York City over the last 25 years. Rather than preserving public housing, NextGen is the continuation of the opening up of investment opportunities for already-wealthy private actors and entities. History also tells us this usually comes at a high cost for residents and existing community members.

In the mid-90s, laws regulating rent-stabilized housing were severely weakened. Specifically, landlords were now able to increase rents when tenants vacated, greater rent increases were allowed if apartments were renovated, the costs of major capital improvements to buildings could be passed on to tenants, and when units surpassed a rent threshold of $2000 ($2,774 by 2019), the unit could be deregulated entirely, allowing the landlord to rent it at whatever the market would bare. Thanks to mass tenant organizing, most notably by Housing Justice For All, these laws were reversed this past summer. However, in the 25 year interim, the stock sustained a net loss of 142,868 units.

Thanks to housing advocates we understand the role private equity firms played in this loss of units, and the predatory nature of the practices they employed in garnering greater profits and deregulating units. For example, research by ANHD highlights the aggressive purchasing of buildings with regulated units by private equity firms between 2005 and 2009. Additionally, their research highlights a predatory financing scheme wherein debt obligations were based not on rents paid by current tenants, but instead on higher future rents that could be achieved through tenant turnover and eventual deregulation.

Relatedly, research by Stabilizing NYC (SNYC) and the Community Development Project at the Urban Justice Center (CDP) revealed the broad extent of tenant harassment, and its consequences for already vulnerable populations (i.e. lower income, non-English speaking, racial and ethnic minorities, and women). In naming these business practices and the consequences for tenants, advocates promoted the term predatory equity, which was also adopted by scholars and public officials.

This research demonstrates very clearly how the re-regulation of rent-stabilized housing in New York enhanced the appeal of those apartments in the eyes of private equity firms by making them more profitable. We can also understand De Blasio’s Housing New York plan through this lens. This plan rezones neighborhoods, or repurposes the land in neighborhoods, in ways that make them more attractive to private investment firms. This often means converting manufacturing or industrial zones to mixed-use, meaning tall residential towers with commercial space on the ground floor.

Along Jerome Avenue in the Bronx, these profit-producing towers come at the expense of the auto repair shops that previously lined the boulevard, and provided good jobs to the community and an important service for drivers in the city. Moreover, organizing groups’ fears about rising land values and displacement pressures for tenants and small businesses seem confirmed by spikes in sales prices in targeted areas.

NextGen is another step in this direction of opening up land and housing for private investment and profiteering. In some cases like at Holmes Towers, community resources like playgrounds are being targeted for replacement by largely market-rate residential towers built and owned by private developers. In other cases like at Wise Towers, buildings are being targeted for conversion to private management. With regards to the latter, while the city has noted that they are not giving up these properties but instead are maintaining partial ownership, tenants fears of displacement are confirmed by the outcomes of similar undertakings at public housing developments across the country.

Further confirmation comes from Ocean Bay Apartments, NYCHA’s pilot project that was transferred to private management in 2016. As City Limits has reported, from January 2017 to February 2019, Ocean Bay had the highest rate of eviction of public housing developments across the city, and that rate was more than double the development with the second-highest eviction rate.

Taken together, this unfolding history tells us that private equity is not the solution. It ties tenant’s futures to the predatory practices of private actors which, for existing community members, has resulted in harassment, or displacement, or both.

Instead, as tenant organizing groups suggest, the city needs to make NYCHA a budget priority. With a more-than-$90-billion-a-year budget, New York is a wealthy city that can and should rework its budget to prioritize the needs of this community. If they don’t know how to do this, Fight For NYCHA has put forth a People’s Budget for Housing, Justice and Dignity that might serve as a template. Moreover, community groups in western Queens are advocating that the public money being slated for development over Sunnyside Yards–more than $22 billion–could be better used for NYCHA repairs. The city could also work to create new funding streams, perhaps starting with a pied-a-terre tax.

Beyond the city’s own budget, public officials could help us recoup the public’s money that has been allowed to be offshored and untaxed thanks to tax loopholes. SEC filings show that Apple alone would need to contribute about $60 billion to the country’s coffers. Moreover, research by the Citizens for Tax Justice and the U.S. Public Interest Research Group Education Fund shows that jointly, the top 500 largest US companies who hold more than $2.1 trillion in accumulated profits offshore, would contribute more than $620 billion.

This is not only enough to fix NYCHA and fund it for years to come, but it is enough to repair and maintain all public housing developments across the country, and still have public money left over to build more to meet the needs of the hundreds of thousands of households on the public housing and Section 8 waiting lists, or those doubling up with friends and family, or living in shelters or on the streets.

The bottom line here is that we don’t need private investment for fix NYCHA or create affordable housing. And NextGen isn’t the best we can do. We don’t even need to get extremely creative to find solutions. We need a political will that is guided by the needs of the people rather than the needs of profiteers.

Kristen Hackett is a member of the Justice For All Coalition, a group of LIC and Astoria residents fighting for dignified housing, good jobs and just development in Western Queens, and a doctoral candidate and fellow at The Graduate Center, CUNY.