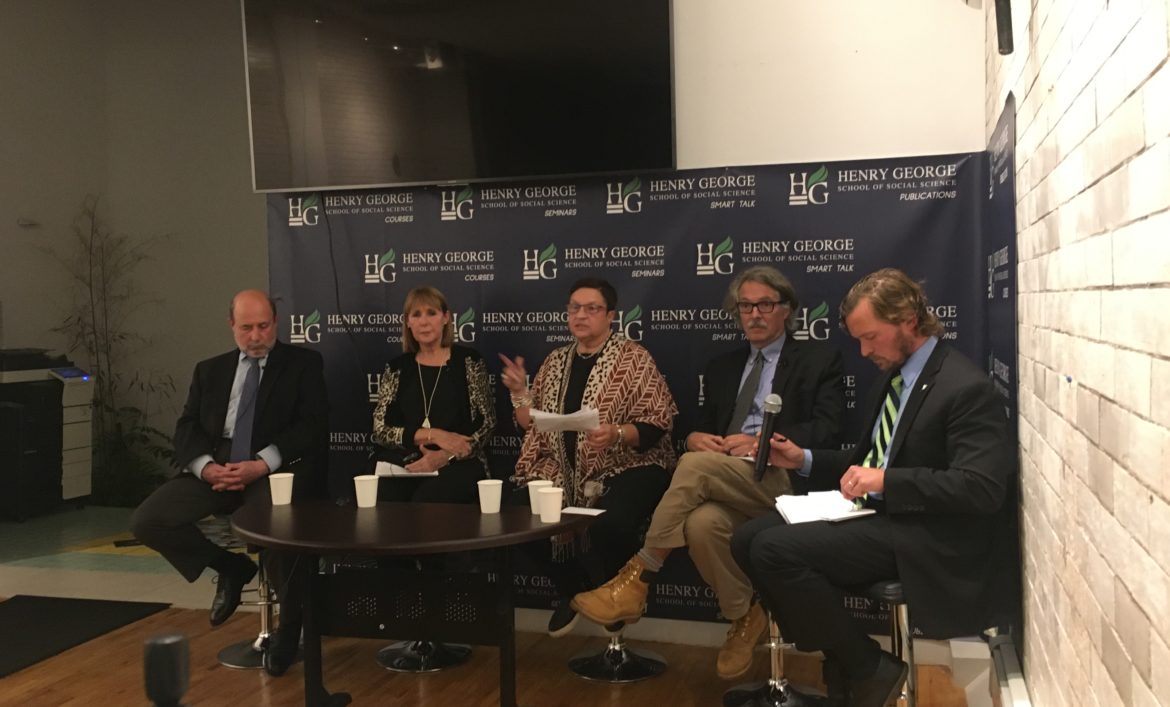 After a dramatic push by tenant activists this spring, the state passed the first major pro-tenant reforms to the rent stabilization system in over 20 years. The updates to the laws included removing a de-control rent threshold that allowed apartments to be taken out of the stabilization system, removing the ability to raise rents upon a vacancy and limiting the amounts landlords can pass on in rent increases following an apartment renovation.

On Thursday, City Limits hosted a discussion among a landlord industry group representative, and tenant activist, a real-estate broker and a housing policy analyst and to discuss how the laws are playing out, three months in.

With representatives from such different positions discussing an issue that is quite polarizing and still fresh, it was contentious to say the least. Here are several points that emerged.

1. Landlords think the new laws were political and reactionary.

“This was a political response to housing issues,” said Frank Ricci, director of government affairs for the Rent Stabilization Association, a group representing over 25,000 property owners and building managers and the owner of a small building himself.

No matter how the laws are actually playing out, “No one in the legislature cares,” he said. “Nothing will change because this was all about politics, not substance.”

“Although we didn’t get everything that we want, this is a start,” said Carmen Vega-Rivera, a tenant leader with Community Action for Safe Apartments, CASA, a Bronx tenant organization. “We needed to start somewhere so that tenants themselves have some say.”

Vega-Rivera and others see the new laws as the first pro-tenant change that’s been made to the rent laws in years, and they aren’t particularly concerned with small landlords’ profits being squeezed.

Ricci cited several negative effects of the new laws, including landlords not investing in maintenance of stabilized apartments.

Denise Favorule, a broker for the Corcoran Group, echoed Ricci’s complaints, making the argument that squeezing landlords actually hurts tenants. Both warned of a coming crisis of rental housing falling into disrepair as landlords decline to undertake major renovations, citing the example of the Blackstone Group laying off maintenance staff at Stuyvesant town.

4. Tenant allies think the new law will slow rising rents across the city.

Tom Waters, a housing policy analyst at the Community Service Society, said low-income tenants were paying 40 percent of their incomes as rent in 2002, which increased to 52 percent in 2017. “That will now slow dramatically. It won’t reverse. But we’re drawing the line at 52 percent of income, if it works out the way it should,” he said.

5. Both tenants and landlords are concerned about enforcement of the new law.

“We need to do a better job informing tenants that the rent laws have changed,” said Vega-Rivera. “Through CASA and other tenant organizing groups, we’re getting the word out.”

There is much question about how the Division of Housing and Community Renewal, the arm of state government tasked with overseeing the rent laws, is going to approach enforcement. Their budget was recently increased to approximately $50 million, allowing for new staffers, but a recent report suggests there is a two-year backlog for a response to a rent overcharge complaint.

“HCR is Cuomo’s baby and it is not up to the task,” said Vega Rivera.

6. The updates to the rent stabilization laws won’t solve the affordability crisis.

“There’s a two percent turnover in stabilized apartments versus 8.5 to 9 percent for market rent apartments. There’s also family succession involved. These apartments are not going to be turning over,” Favorule said, citing the example of a family with a $500,000 income now being able to hold on to a rent-stabilized apartment indefinitely. “This is not addressing the root cause,” said Favorule. “The root cause is not protecting 1 million apartments. The other 1.5 million renters in the city like myself will be bearing the burden of more and more rent increases by landlords,” she said.

Of course, the vast majority of rent-stabilized tenants do not make $500,000. According to the 2014 New York City Housing and Vacancy Survey, about 65 percent of stabilized households had incomes of $60,000 or less. A quarter of a million rent-stabilized households had incomes of less than $25,000. Vega-Rivera believes that for those tenants, the rent-regulation forms are a major step forward for affordability. But she, too, doesn’t think it will fully solve the problem. “It’s not going to end displacement. It’s happening every day. It might slow it down,” she said.

Waters pointed again to the number of low-income New Yorkers paying half their income or more toward rent: “A person in that situation is vulnerable to displacement. The laws aren’t going to make that [number] go down. In fact it will probably continue to increase. But probably much more slowly.”

Watch the full discussion below. (Note: there was a frequent buzzing in the room as a result of a faulty PA system.)