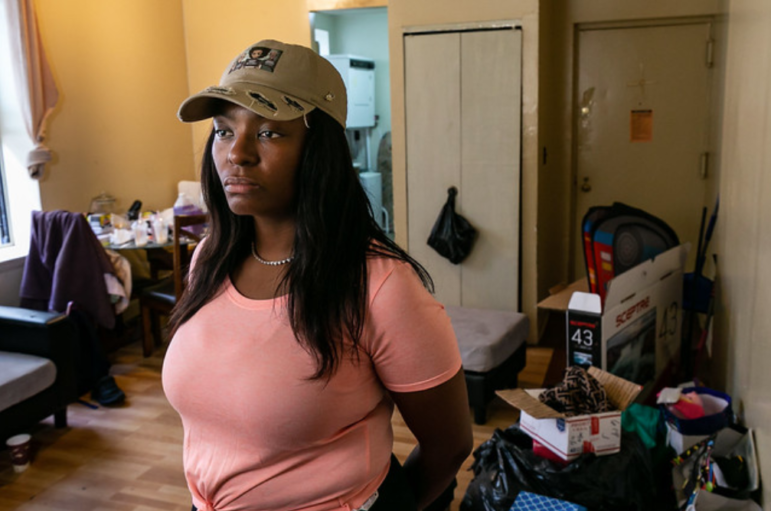 Jennifer Bryant at her NYCHA Park Rock Rehab apartment in Crown Heights. She is dealing with issues related to her NYCHA lease renewal.

What if you received a bill more than three times what it should have been?

That’s what happened to Gwinovon Coffey, a tenant in the East Harlem Jefferson Houses who had recently retired and whose daughter had fallen ill and stopped working. She went to her management office to report the change in income but it was not processed. A full two years later, she has just won a court battle to clear a significant debt of unpaid, overcharged rent. She was being charged $700 a month instead of the proper $200.

She is not alone in her struggles.

The city’s housing authority’s recertification process for tenants is difficult to navigate and frequently results in errors, causing tenants to be charged more than they should for rent. It drags them into costly administrative processes where they must choose between paying more than they reasonably can or fighting to eliminate debts of unpaid rent.

NYCHA households pay 30 percent of their income as rent, as outlined by U.S. Department of Housing and Urban Development rules. To ensure this is the case, tenants are required to submit paperwork each year documenting their household’s income as well as deductible expenses. Deductions are available when a family has children under 18, is paying for elder child care or is shouldering medical costs. Households also must submit paperwork to NYCHA when their incomes change so that their rent can be changed, too.

Both NYCHA and tenants frequently get the process wrong, resulting in rent overcharges and families being dragged into the administrative and court processes, both of which can lead to eviction.

“We see a lot of tenants in housing court who have nonpayment cases because the rent is too high,” says Genesis Aquino, NYCHA program coordinator at Housing Court Answers.

The frequent problems have prompted the Lenox Hill Neighborhood House, a Manhattan community organization, to set up a rent-check clinic where NYCHA tenants can verify that NYCHA has calculated their rent correctly.

Tenants queue up and an attorney with Lenox Hill uses a worksheet to verify that their rents are calculated correctly. Thirty percent of tenants they see have some sort of issue.

There are often lots of problems in the $100 to $300 range, says Larissa Bowman, an attorney in charge of the project.

The work they are doing is crucial because when tenants’ rents are incorrect, the overcharges pile up, sometimes resulting in thousands of dollars in overpaid rent; $300 extra per month over two years is a significant sum.

Rachel Andino is fighting a debt of $12,000 for exactly this reason. After her son moved out of their Red Hook apartment, she submitted paperwork for a rent adjustment. Without his income, her rent should have been cut in half. Her adjustment was not processed, though, and after paying the full rent for two months she stopped, reverting to paying the amount she had paid before her son started working.

NYCHA reports that 35 percent of units were behind on rent in 2018. It brought tens of thousands of cases against tenants for nonpayment. Suspected rent miscalculations could factor in many of those cases: When tenants face rental bills that they believe are too high, they frequently don’t pay anything at all.

“An understandable response for a lot of folks is, ‘I don’t know what’s wrong. I’m going to hold on to my money, then I will pay what I owe,” says Chris Helwig, a fellow with the Lenox Hill Houses who developed the rent check clinic.

“Of course, then things come up and the money they were hoping to save, they don’t have,” he says.

NYCHA doesn’t deny the issues with recertification. “NYCHA continues to work with residents to assist with HUD’s annual recertification process,” Michael Giardina, a spokesperson, said in a statement. “The Authority provides many opportunities and formats for residents to properly recertify each year, while also making sure any errors in rent calculations are immediately addressed.”

While recertification issues lead to tenants being overcharged, it’s also likely that miscalculations leads to some undercharging too.

Is a new process part of the problem?

The once-analog recertification system went digital in 2017 as part of NYCHA’s modernization plan. Tenants submit their paperwork through their computers, mobile devices or digital kiosks that were installed in every development’s management office.

For elderly tenants, those without access to or familiarity with a computer and others, this system has proven difficult to navigate. 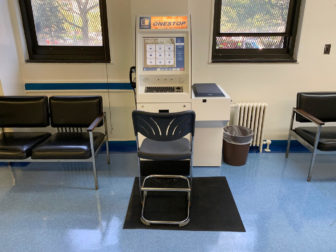 After the recertification system went digital in 2017, kiosks were installed in every development’s management office.

But problems arise most frequently when incomes change significantly—due to loss of employment or when a family member moves out or stops working. When this happens, a tenant must submit an interim recertification.

Erica, a tenant of the Gun Hill Houses in the northern Bronx, lost her job in March. (She asked that we not use her last name.) When she went to submit her paperwork to notify NYCHA, the computer didn’t recognize her Social Security Number, she says.

She told the management office back in the springtime, but as of late-September she still hadn’t received a revised lease. Something didn’t go through. The kiosk indicates her social security number was not processed, she says.

She didn’t know what amount to pay, so she didn’t pay anything at all.

She was in NYCHA’s administrative office in late September because NYCHA still hadn’t received her paperwork. She also owed $3,029 because her monthly rent still hasn’t been adjusted to match her income. “I’m freaking out right now,” Erica said. “I don’t want to pass this month but the rent is too high.”

It’s not clear if the system is full of glitches or is just confusing: problems puzzle users and those trying to help them alike.

What is clear is that there’s not enough help for tenants who are struggling and when help is offered, it frequently backfires.

When tenants have issues with the digital process, they turn to the staff in their development’s management office. Sometimes, this is just another headache: Staff will tell them to return later, or that they can’t help them at all.

But perhaps with helpful intentions, staff often will take these papers and tell they will submit the paperwork for them. It often gets lost or is never submitted.

This was Jennifer Bryant’s situation. She had trouble putting her documents in the online system, so when seeking help, she was told to leave the documents with the housing assistant and they would do it for her. It appears they never did.

“Like with all things NYCHA, this is a problem of it being a mismanaged and underfunded bureaucracy,” says Bowman.

“It seems like they are overwhelmed with the volume of work they have to do. People’s incomes do change. The nice thing about public housing is that the rent should reflect income. But it requires staff who are available end trained to make it happen and have it be a short turnaround time.”

Edward Josephson, director of litigation and housing at Legal Services NYC, an organization that frequently represents NYCHA tenants in court, also blames the management offices. “I’m sure there is a management challenge in overseeing what goes on in all these management offices,” he says. “That would be a challenge even for the well-intentioned.”

“There were so many folders all over the place. I think they’re just very unorganized,” says Andino.

There are hundreds of management offices across NYCHA’s 326 developments. When asked if staff in these offices might be part of the problem, NYCHA responded that staffing resources vary by development.

In one office, there are three staffers for a 3000-unit development, says Helwig.

Fights over back rent

“If the client did not get a stamped paper back, then it’s like NYCHA didn’t get it at all,” says Bowman.

Stuck with incorrect leases for months on end, tenants’ debts pile up. Even once a tenant is able to get NYCHA to fix a lease, NYCHA will frequently still press them for back rent owed.

Fighting against this is a matter of proving that you submitted the paperwork when you did. But when management offices take tenants’ paperwork, they don’t give proof of submission.

“That’s where the problem came in,” says Coffey. “I didn’t know that they were supposed to stamp the papers with this machine that they had over there.”

Coffey was just last month able to get her lease adjusted after a two years of persistence, but a nonpayment case in housing court dogged her. The debt NYCHA claimed she owed was significant and at the crux of the dispute was the fact that she had no proof that she submitted the paperwork when she says she did.

How to tell if your rent is correct: Your NYCHA rent should be 30 percent of your income after deductions. This form lists how to calculate rent and many deductions available.

How to submit your recertification properly:  Tenants can recertify using the online self-service system or through the kiosks located in management offices. NYCHA also operates three trucks with computer kiosks that drive from development to development, giving tenants access to a computer where they can submit recertification forms.

Housing Court Answers tells tenants to submit papers to the management office and ask for a stamped copy marking the date or send the documents via certified mail and get a receipt. If there are any issues, this will provide ample proof that you submitted the paperwork when you did for the court.

What to do if  your rent is incorrect: Tenants who believe their rent is incorrect should write a letter to their management office explaining the problem. Submit the letter with proof of your household income and when delivering the letter, be sure to get a stamped copy for your own records. A subsequent meeting should resolve the problem, but if not, tenants can file a formal grievance complaint. They can do so by asking for a form in their management office.

This is an official procedure and will lead to a meeting with the development staff. If this request is denied, you will be issued a letter explaining why. You can appeal this decision by writing a letter to your NYCHA borough office but you must do so within 10 days of denial. More tips on the process can be found here

There is help out there. The Red Hook Community Justice Center’s Housing Resource Center assisted 511 tenants with recertification last year. Organizations such as MFY Legal Services will also help tenants calculate their rents.