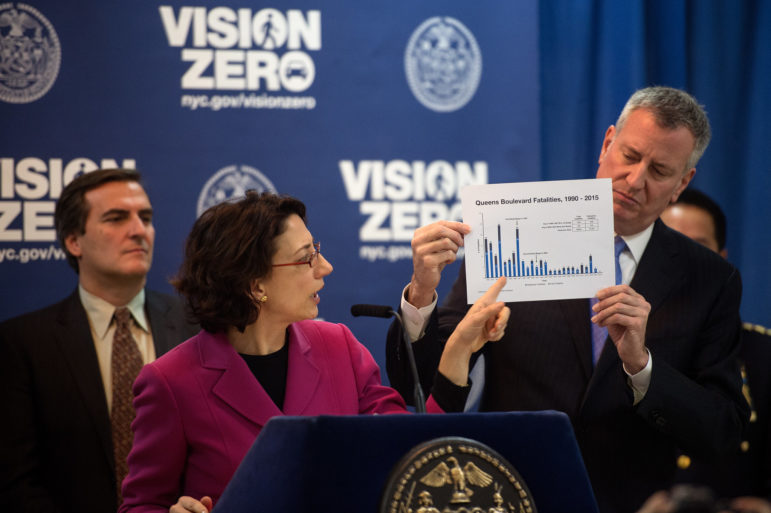 Mayor de Blasio with DOT Commissioner Polly Trottenberg (and Sen. Michael Gianaris in the background) in 2016, touting the first two years of reduced fatalities thanks to Vision Zero.

The reduction of traffic deaths in New York City under his Vision Zero program is one of Mayor de Blasio’s talking points as he runs for president. And for the first five years of his mayoralty, the trends did run in the right direction: Deaths fell each year, dropping from 299 the year before de Blasio took office to 203 in 2018.

In the early months of 2019, however, there was a spike in traffic deaths. Whether that’s an aberration or a change in direction, the fact is that although 203 is better than 299, it is not zero.

On Wednesday’s Max & Murphy Show on WBAI, Transportation Alternatives interim executive director Marco Conner said that the problem–an ironic one, given that lowering the speed limit citywide was one of the first steps de Blasio took–is that the mayor has moved too slowly.

“The frustrating thing in light of this epidemic of traffic violence is that under de Blasio, even though many of these tools have been implemented, they simply have not been implemented at the pace that the crisis and the epidemic requires,” Conner said. “The goal of Vision Zero, which is something that Mayor de Blasio adopted, is to reduce to zero the number of people killed and seriously injured in traffic, and to do so by 2024. And putting that number on there, that year, really should be the cause of a sense of urgency to apply these life-saving measures at an accelerated pace. And we’ve seen that with a few of these measures, but by and large it simply hasn’t been applied on a wide scale at the pace that we need.”

Councilmember and Transportation Committee Chair Ydanis Rodriguez told the show that the city must consider further changes to the rules of the road, like mandating that left turns (the most dangerous vehicular movement for pedestrians) be made at a speed of 5 mies-per-hour or less.

But the bigger issue is not the rules of the road, but the roads themselves. The Council recently passed a bill authored by Rodriguez that compels the Department of Transportation to consider a list of safety-minded design changes every time it redesigns a street, and, if any safety elements are left out of the final plan, explain why.

“So what we know is that every year we have seen major investments in our city dedicated to DOT for them to have all the right resources that they need to redesign our streets. We celebrate all the accomplishments, we know that there have been large numbers of plazas, pedestrian plazas being built. We know that we also, in the last few years, have seen progress on building more protected bike lanes. However, what we have is not enough,” Rodriguez said.

Both Conner and Rodriguez hailed Speaker Corey Johnson’s move toward creating a master plan every five years to map out new bus and bike lanes. But, as Rodriguez said, the real work is to change the culture around ownership of the city’s streets.

Hear the full show or either interview below.

2 thoughts on “Max & Murphy: A Hard Look at Vision Zero”