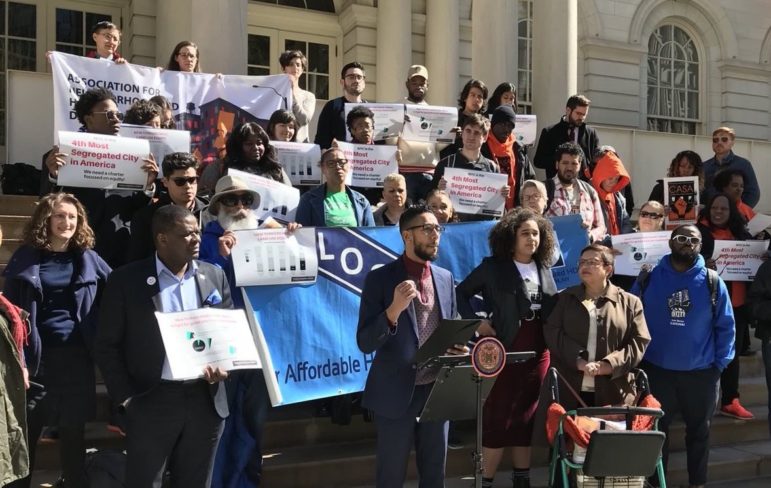 Members of the Thriving Communities Coalition, which seeks charter revisions to impose comprehensive planning and reform the land-use process in other ways, rallied at City Hall.

As of Tuesday night, there were 58,794 people in New York City’s homeless shelter system, including 21,023 children. In other housing news this week:

• The next de Blasio administration rezoning is coming down the stretch, this one affecting Staten Island. On Monday the City Planning Commission (CPC) will vote on the proposed Bay Street rezoning. The meeting starts at 1 p.m. at 120 Broadway (Concourse level) in Manhattan and can be viewed live here. If it passes the CPC, Bay Street will head for a final vote to the City Council, where five other rezonings (East New York, Far Rockaway, East Harlem, Jerome Avenue and Inwood) have passed under this mayor. The Council is the last stop on the city’s Uniform Land Use Review Procedure.

• At the other end of the planning process is the possible rezoning of Bushwick, which has been the focus of an intensive community-led planning exercise. The de Blasio administration is expected to release its draft rezoning proposal for Bushwick next Tuesday.

• Also expected early next week: proposals from the Charter Review Commission, which is considering putting before voters a change in how New York does land-use planning. Advocates for a comprehensive planning system rallied this week to press the commission to give voters a chance to make that change. “Right now we are facing overwhelming displacement, harassment and segregation in our neighborhoods. We have an opportunity now to change the Charter of NYC to enshrine a process that is more transparent, has greater community input and is truly fair for every resident of New York City,” said Alex Fennell, Network Director at Churches United for Fair Housing. Councilmember Antonio Reynoso (who, incidentally, joined with colleague Rafael Espinal to spearhead that neighborhood-based planning process in Bushwick) spoke at the rally:

The current land use system is BROKEN ⁦@CMReynoso34⁩ calls for Charter Revision to take up #compplanning4nycnow pic.twitter.com/XILRoypAKN

• The intersection between housing vulnerability and climate risk was underscored this week when Demos released a report on the unique risks climate change poses to the city’s Latino community. And it’s not just about living near the water. “In New York City,” Demos found, “more than half of public housing residents also live in the city’s most heat-vulnerable neighborhoods—and nearly half of those residents are Hispanic.”

Key Coverage
On City Streets and in Wild Landscapes, the Fight for America’s Soul in 2020 is About Land
From gentrifying urban neighborhoods to wild federal lands, it’s time for a unifying vision of how America’s fundamental asset can serve the public interest.

• Talking with anchor Errol Louis on NY1’s Inside City Hall, Mayor de Blasio said once again that his incoming deputy mayor for housing and development, Vicki Been, would be empowered to make major changes to his 300,000-unit housing plan.”We’re going to be looking always at our affordable housing plan in general, beyond this specific organization and the specific dialogue from last year. When Vicki Been got named as our new Deputy Mayor, she made very clear her focus is going to be to do more to get our affordable housing program to reach lower-income New Yorkers, and certainly to focus even more on seniors, because this is one of the biggest growing parts of our community and we need more senior affordable housing,” he said. “So with her leadership, you will see additions and changes to our plan over time, those all haven’t been determined yet.” The mayor also faced questions about his 2018 promise to direct $500 million to build senior housing on public land: Advocates have accused the mayor of pulling back from the promise by committing less money than he vowed, but he insists the half-a-billion figure always involved other resources beyond the city’s.


• Also this week, de Blasio appointed Jackie Bray, currently First Deputy Commissioner at the New York City Department of Homeless Services, as director of the Mayor’s Office to Protect Tenants. “The Mayor’s Office to Protect Tenants will spearhead the City’s anti-harassment initiatives, enhance interagency enforcement and closely engage with tenants and advocates,” according to City Hall.

• Reversing the impact of policies that for decades have criminalized poverty will mean investing in new policies, including in the housing arena, reports the Federation of Protestant Welfare Agencies. One such initiative is the Frequent Users Service Enhancement Initiative, “which matches client data across homeless shelters, emergency rooms, and jail records to identify and connect those who would benefit from targeted, supportive housing opportunities and services with these opportunities.” FPWA concludes: “While expensive, this multi-faced supportive housing program is one of the few evaluated interventions that has been shown to address cycles of offending, homelessness, and hospital use and assist individuals in achieving stability in their lives.”

• Among the racial disparities that mar the U.S. economy, the wealth gap might be the most pernicious. In a report released this week setting out 10 ways we can close that gap, the Institute for Policy Studies and Kirwan Institute for the Study of Race and Ethnicity with the National Community Reinvestment Coalition said that new and aggressive steps to create affordable housing are a key element:

Affordable housing remains out of reach for millions of families. A comprehensive approach like the “American Housing and Economic Mobility Act” is needed to ameliorate historical injustices in housing and to address the current crisis. Perhaps the most direct way the bill works to reduce the racial wealth divide is by including a provision that provides down payment assistance to first-time homebuyers living in formerly redlined or officially segregated areas. Three out of four neighborhoods that were redlined are still low income showing the long-term effect of this policy on cities. Safeguards would need to be considered to prevent the moral hazards of subsidizing unintended recipients gaming the policy and hastening displacement of intended recipients via gentrification.

• On Thursday, Councilmembers Mark Levine and Vanessa Gibson are expected to join the Right to Counsel NYC Coalition at a press conference backing new legislation “that would require the City to work with trusted tenant organizing groups to engage and educate tenants about their rights.” The organizers are also calling for the Council to take up the Right to Counsel 2.0 legislation, which would expand eligibility for lawyers in housing court to households making up to 400 percent of federal policy guidelines (the current policy applies to those making up to 200 percent of the poverty threshold).

• And as the New York State legislature moves toward crunch time on rent regulations (set to expire June 15), and tenant advocates push to strengthen the existing laws and expand them beyond the eight downstate counties where they now apply, Next City reports that the long-standing intellectual aversion to rent control might be crumbling: “A long-held economic theory about rent control is that the approach actually hurts affordability over the long term by constricting supply, for example by incentivizing landlords to convert rental units into condos. Across the United States, there’s evidence that the economic arguments against rent control are no longer as compelling to as many people as they once were.”