CityViews: NYC Activists Must Take the Environmental Movement to the Next Level 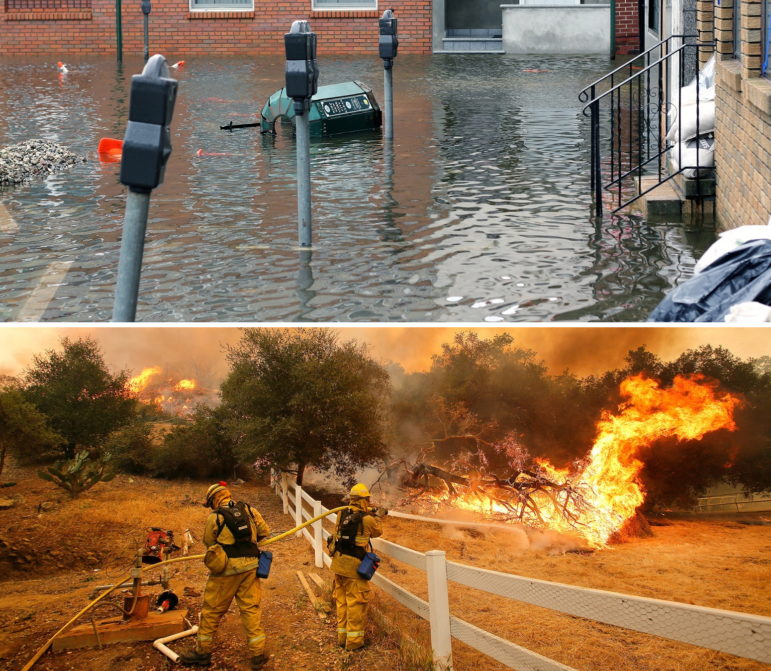 Destruction from Superstorm Sandy in Howard Beach in 2012 and last year’s California wildfires. Climate change will likely make disasters like those more common, and there is growing evidence that time is running out for any hope of even mitigating those risks.

Fact: The U.S. government and its politicians have known about the destructive effect on the climate of carbon dioxide (CO2) emissions since way back in the mid-1960s, during the presidency of Lyndon Johnson.

Fact: For at least the last 30 years, people in America, as elsewhere in the world, have engaged in increasingly large, loud and desperate legal demonstrations to pressure our leaders to act responsibly to combat climate chaos.

Fact: Last year, there occurred the biggest rise in carbon emissions in the U.S. in eight years, up 3.4 percent from 2017 – even while a record number of coal plants in America were retired. This was revealed only a few months after an IPCC report announced that the world must seriously reduce carbon emissions in 12 years or risk permanent catastrophic consequences.

Environmental organizations in America have mostly tried to color within the lines, lines that the establishment has drawn. True, there have been some groups that have engaged in radical direct action, such as Earth First! But most environmentally-conscious American activists have done all the nice, polite things: participating in officially-permitted marches and rallies, lobbying legislators and government agencies, contributing to establishment organizations like Sierra Club and supporting politicians they consider progressive on this issue. And none of this has brought us significantly closer to a sustainable world.

On the contrary: the same market forces that have made it increasingly impossible for working people, particularly people of color, to get ahead have led to the total degradation of our air and water… and the situation is getting worse by the day. The goal of holding global temperatures to 1.5 centigrade degrees above pre-industrial levels – despite being absolutely necessary to the survival of tens of millions at least – feels more and more like a pipe dream.

Many people would claim that the chief obstacle American environmentalism faces is that the president is a climate denier. But this isn’t the real problem. Just as dangerous is the scenario by which our leaders publicly concede the reality of climate chaos, but propose or enact ludicrously inadequate solutions – akin to putting a band-aid on a leprous limb. The ideas needed to cope effectively with the crisis are all out there. What has never been there, up to now, were government officials with enough guts and savvy to adopt those ideas and implement them effectively.

Actually, America has been in this place before, in earlier eras. During the anti-Vietnam War movement in the 1960s and again during the AIDS emergency two decades later, activists had hit a brick wall. Conventional demonstrations just weren’t cutting it. Dissent needed to be taken to the next level – but where was that level, and how could one get there?

In the mid-to-late-‘Sixties, antiwar action began to move, rather swiftly, from protest to resistance. And in the ‘Eighties, a new group, ACT UP, suddenly insisted that AIDS sufferers must get affordable drugs. In both eras, proponents of their respective causes refused to play nice. The peace advocates attacked draft boards and destroyed records; ACT UP invaded the stock exchange and the FDA. In both cases, through aggressive direct action, the activists finally got the publicity and public acknowledgement they needed. Thus, in the ‘Sixties, antiwar politicians started to appear out of nowhere, and in the ‘Eighties, liberal officials realized they could no longer ignore the health concerns of marginalized populations.

Now the same evolution from protest to resistance is taking place in the climate justice area, starting in the U.K. There, in the fall of 2018, Extinction Rebellion (XR) – a militant but strictly nonviolent climate movement – was launched. Adherents of the new movement range from distinguished academics to the remarkable 16-year-old Swedish schoolgirl Greta Thunberg, whose example has inspired worldwide strikes by schoolchildren to force action on the climate.

However, this new movement, though it rejects violence as a tactic, also does not play nice. In November of last year, XR in London occupied the five main bridges over the River Thames for six hours, described as “one of the biggest acts of peaceful civil disobedience in the UK in decades.” In the same month, a number of XR activists super-glued themselves to the gates of the UK government’s residence at Downing Street, and others held a memorial service in Parliament Square to “mark the loss of life the planet is experiencing.” In December, London’s mayor, Sadiq Khan, declared a climate emergency – and many believe the timing was not a coincidence.

Direct action by environmental groups, as I’ve already mentioned, is nothing new, but for the most part, these events have involved relatively small numbers. For example, three pipeline protesters were just convicted of criminal trespass for locking themselves into a section of the AIM gas pipeline in New York State, stopping construction on the project for 18 hours. What’s new about XR is that its actions have included masses of people willing to disrupt the status quo and get arrested to bring attention to the climate crisis. And this tactic, so far, has been extremely effective.

What’s also interesting about the XR movement is its strong focus on intersectionality. XR considers the dilemmas of frontline communities as inextricable from the problems caused by the environmental emergency. It is actively reaching out to such communities, not so much to form alliances as to listen, so as to gain input and insights on what to do going forward.

XR is going global. Here in the U.S., a branch has established itself and is planning a series of major events across the country this month, including in New York City. Environmental activists in New York are particularly excited about the XR model, with good reason. In 2012, New Yorkers were gobsmacked by Superstorm Sandy, whose destructive force was greatly enhanced by climate change. (As Kevin Trenberth of the National Center for Atmospheric Research has written, “All weather events are affected by climate change because the environment in which they occur is warmer and moister than it used to be.”) On a personal note, in the aftermath of the storm, I was without power, heat or hot water in my Manhattan apartment in November for several days – and considered myself one of the lucky ones. Given the city’s particular vulnerability as perhaps the most prominent seacoast city on earth, it’s only logical that New Yorkers should take the lead on the issue, particularly since our politicians seem uninterested in doing so.

The international organization is also gearing up for a huge global action in April. It will be very interesting to see where XR – and other organizations with similar approaches – will take the environmental movement … and America.

2 thoughts on “CityViews: NYC Activists Must Take the Environmental Movement to the Next Level”