Most Opponents of Proposed Bronx Jail Want No Jails, Period 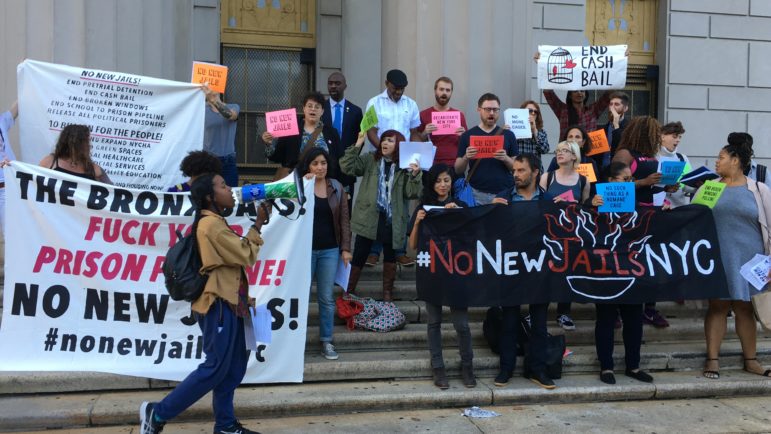 Protesters noted that most people held on Rikers are awaiting trial, suggesting that a new approach to pretrial detention to substantially reduce the need for cells.

Protesters dominated a hearing on the city’s plan for a borough based jail Wednesday night as they gave testimony in fierce opposition to the city’s plan to build four borough-based jails as part of the plan close Rikers Island.

Chants of “no new jails,” “shut it down,” and boos and cheers drowned out City Hall representatives and, often, also those testifying in the Bronx County Courthouse hearing room.

Community members laid out criticism that the plan simply re-locates the city’s harmful incarceration rather than reforming the system. They argued that the plan pits communities of color against each other and made resoundingly clear that the South Bronx needs city investments in positive services like schools, housing and jobs, not incarceration.

“Everybody in the room can think of so many ways that $10 billion worth of city funds can benefit our community,” said Frances Perez, an organizer with No New Jails and Sunset Park for a Liberated Future.

“The opening of these facilities normalizes incarceration as a localized response to crime without actually increasing the safety of New Yorkers,” said Kei Williams, a member of No New Jails and an organizer with Black Lives Matter.

Many of the demonstrators were organized by No New Jails, a recently formed coalition of activists and community group members which is organizing to oppose jail construction across New York City.

The coalition, which has formed in recent weeks as the city has held hearings on the jail plan, is composed of close to 100 members from neighborhoods and community groups near each of the four jail sites. The groups include Critical Resistance , Sunset Park for a Liberated Future, Queens Neighborhoods United and Take Back the Bronx.

The group has laid out a platform (see it here) that calls for the immediate closure of Rikers, investments in alternatives to policing and jailing, staunch opposition to new jail construction and investment in community resources.

The hearing was the last of four presenting the city’s $10 billion plan, which was formally introduced in August. It calls for the construction of four new facilities in the Mott Haven, Downtown Brooklyn, Kew Gardens, and Manhattan’s Chinatown. The hearing was put on by the Mayor’s Office of Criminal Justice, which is overseeing the jail construction plan and was intended to be a forum to hear public comments on the plan.

The city will continue to accept written comments on the Draft Scope of Work for the new jails until October 15th, after which, if there are no changes, it will move into the Uniform Land Use Review Procedure (ULURP) certification, which reviews all land-use decisions.

Diaz in particular, was drowned out by protesters who shared with his opposition to the jail in Mott Haven but heckled him for “taking money from developers” and for not sharing their opposition to all new jail construction.

“We don’t believe he’s on our side,” said Rick Quantz. “He doesn’t want to end all jails.”

Diaz, like the protesters, called the City Hall hearing a farce and articulated support for closing Rikers Island, ending cash bail and raising the age of criminal responsibility for juvenile offenders.

The protesters, however, saw Diaz’ likely support for an alternate location for a new jail as a failure to redirect resources towards productive community services.

City Limits is a nonprofit. Your support makes news (literally). Join us!

2 thoughts on “Most Opponents of Proposed Bronx Jail Want No Jails, Period”