UrbaNerd: The History of the City’s Floating Jail 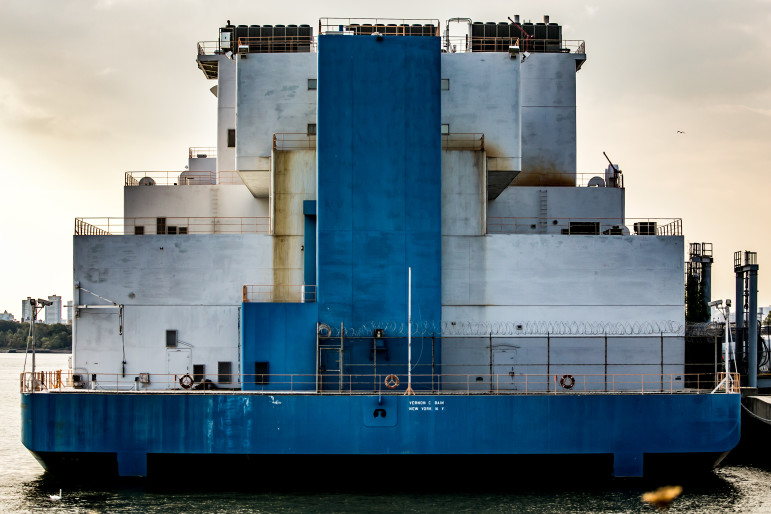 The Vernon C. Bain Center, a jail barge docked off the South Bronx.

The Vernon C. Bain Correctional Center, an 800-bed prison barge, sits off the coast of Hunts Point and has been intermittently used since 1992.

The city’s prison system, along with the U.S. Navy, appear to be alone in the country in using barges to house detainees. The Bain’s journey began in March of 1987, when city jails were operating at a 110 percent inmate capacity and community groups were objecting to building jails in densely populated areas. The administration of Mayor Koch saw barges as a way to relieve the city of overcrowding and to avoid neighborhood objections.

The Vernon C. Bain, named after a late Rikers Island warden, was the city’s fifth, largest, and most expensive barge. In a contract with Avondale Industries, the city agreed to pay $125.6 million for the delivery of the barge in July 1990. After a 12-day haul from New Orleans, the barge arrived in January of 1992, 18 months after the scheduled delivery and $35 million over its original budget. The new cost of $161 million was due to unanticipated safety code violations and construction problems.

Weeks before opening, officials questioned the need for the barge. Some decrease in arrests had contributed to a low jail capacity of 97 percent. “The money was clearly misspent,” John R Horan, the Board of Correction vice chairman at the time, told the New York Times. Nonetheless, the Bain barge opened to house maximum and intermediate security prisoners in February of 1992.

Two smaller jail barges, the Bibby Venture and the Bibby Resolution, closed soon after the Bain opened. These barges had cost the city $41 million and were sold at a shortfall of $1.8 million. But it was still better for the city than no deal at all, since each cost over a million per year to maintain.

The city’s other two barges — the Walter Keane and the Harold A. Wildstein — are former Staten Island ferries. Both were vacated and docked at Rikers Island in the early 2000s before they were sold for scrap. According to the New York City Department of Correction History, the Keane remains intact at a salvage site in Mariners Harbor, N.Y.

Like the Venture and the Resolution, the price of maintenance is what caused the Bain to temporarily shut down in the summer of 1995. Inmate population had decreased, and the Daily News reported an annual $2 million expense to keep the barge open. “We will probably reopen it in September or October,” said then Department of Correction spokesman Tom Antenen after the closing.

That fall, there was no word of reopening the barge. Vernon C. Bain remained indefinitely closed but continued to be a point of interest as the number of arrests fluctuated.

In 1996, police were planning a six-month anti-narcotics offense campaign. They had notified the Department of Corrections to expect 2,600 more arrests in the first month, reported the New York Times. The city would need to reopen one more jail. Bain was considered but other options were ultimately used.

Following another wave of detainees in 1998, this time against juveniles, the Department of Corrections looked to the Vernon C. Bain as a likely processing center for juvenile offenders. Youth advocates and city council members alike expressed concerns over using an adult jail for children, aged 10 to 16. “We’re very concerned about the conditions. … It was built for adult criminals, and any retrofitting has been minimal,” Laura Cohen, of the Legal Aid Society’s Juvenile Rights Division, told Newsday. “It’s also inaccessible.”

But Juvenile Justice Commissioner Tino Hernandez said the city was out of options. Hernandez assured critics that use of the barge would be limited to 18 months and that no child would stay longer than 10 days. An additional $7 million was used to improve lighting, heating and ventilation and renovate the dorms and dayrooms. In January 2000, the Department of Juvenile Justice permanently left the barge.

Since the barge’s opening, only a handful of prisoners have successfully escaped. In 2004, inmate Ivan Jones, 19, slipped out of his handcuffs as barge inmates were boarding a bus to a jail on Rikers Island. Jones was rearrested shortly after.

Currently, the Bain is used as processing center for adult inmates. The barge continues to be a cost burden for the city: 317 people currently work there, costing the city $23,801,492, according to the latest budget proposal.

Residents of Hunts Point argue the barge’s closing is long overdue and worry that the fight to close the barge has been lost amid the conversation about closing Rikers. On May 3rd, residents along with Councilman Rafael Salamanca, Jr., protested what they see as the city’s inaction in closing the barge—the latest episode in a 31-year saga.

3 thoughts on “UrbaNerd: The History of the City’s Floating Jail”