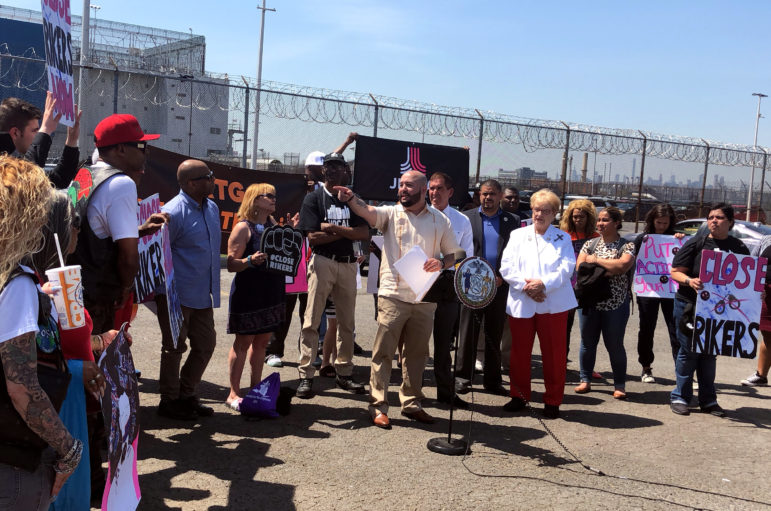 Councilman Rafael Salamanca Jr. led a rally outside the Vernon C. Bain Correctional Facility calling for the city to shut the jail down.

* * * *
This story is a product of the City Limits Accountability Reporting Initiative For Youth (CLARIFY), supported by the Pinkerton Foundation. Learn more about the program here.* * * *

A group of protestors chanting “Sink the ship!” rallied Thursday at the Fulton Fish Market, calling on the city to close down a local jail barge on the East River of the South Bronx.

The rally demanded city officials, including Mayor Bill de Blasio, shut down the five-story Vernon C. Bain Correctional Center, calling the facility an eyesore. Critics say the South Bronx already has another correctional facility — the Horizon Juvenile Justice Center — and another new jail is proposed for the Mott Haven neighborhood in the coming years.

“Mr. Mayor, this could be your legacy,” said Councilman Rafael Salamanca, who organized the rally alongside Just Leadership USA, an organization dedicated to decreasing the number of correctional institutions in America.

Salamanca says the de Blasio administration has told the community there will be efforts to shut down the floating jail once the 10-year plan to close Rikers Island is complete, but protesters said that’s not soon enough.

“We have a mayor here who is saying, ‘We are going to do this within 10 years,’” Salamanca said. “It’s totally unacceptable.”

Proposed by Mayor Ed Koch in the late ‘80s in response to overcrowding on Rikers Island, the Vernon C. Bain Correctional Center opened in 1992. Salamanca claims that past administrations promised the barge would be “a temporary thing in the community.”

The mayor’s office and the city’s Department of Correction did not immediately return requests for comment.

Rev. Wendy Calderon-Payne, of the youth advocacy group BronxConnect, said the city should prioritize the closing of the Vernon Bain Center like it has for Rikers Island.

“We reject the notion that the barge is better than Rikers,” she said at Thursday’s rally. “The barge is part of Rikers.”

“This is a human right issue,” another protestor, Darryl Herring, said. “Do the right thing.” 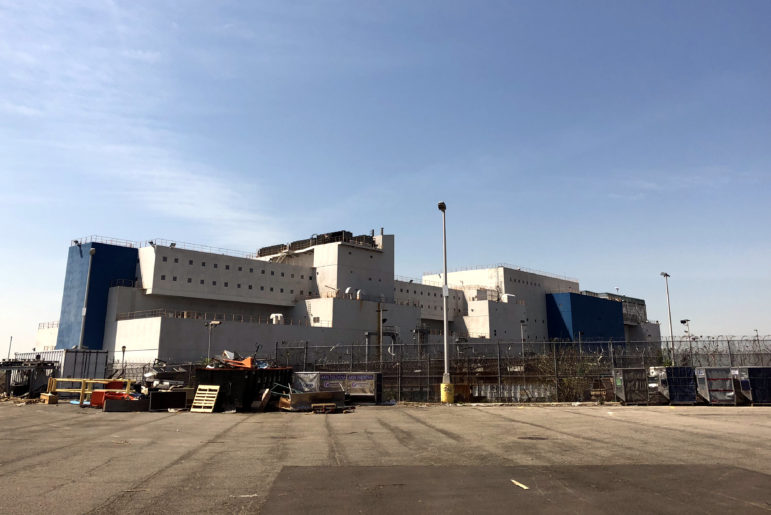 The barge’s hypothetical closure has spurred conversations about how the waterfront site could instead be used by residents. At a Bronx Community Board 2 meeting last month, Salamanca envisioned the space as a place for youth programs or economic development.

“Give this piece of land back to its community,” the councilman said.

One CB2 member proposed the idea of converting the jail into a school, though Salamanca said he’d rather get rid of the barge entirely, calling it “an eyesore for the community.”