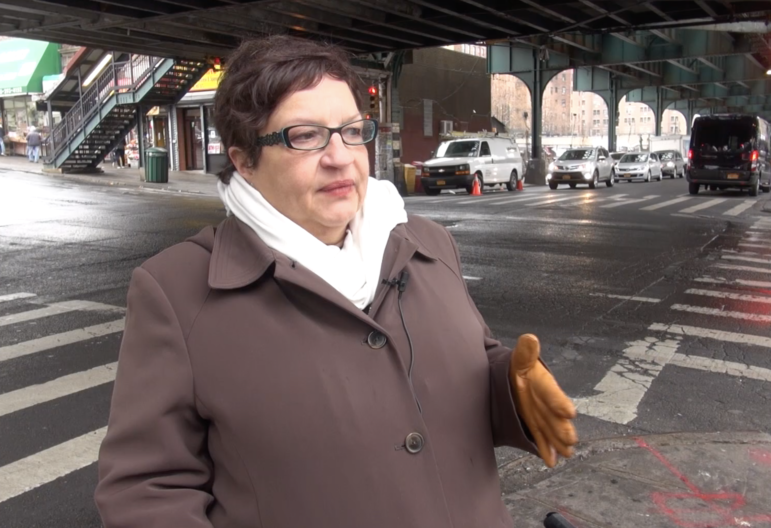 Carmen Vega-Rivera at Rivers Ave and East 167th Street, in the southern area of the larger Jerome Avenue rezoning.

The Jerome Avenue rezoning proposal would encourage increased residential and commercial development along a 92-block stretch of Jerome Avenue and some intersecting corridors. It would allow private property owners who own land along the corridor to build bigger buildings, and in many areas to build apartments where only industrial or auto uses are currently allowed.

On December 12, City Limits went to the western Bronx for a tour of the neighborhood surrounding Jerome Avenue lead by longtime resident and tenant activist Carmen Vega-Rivera, a leader at Community Action for Safe Apartments (CASA) and a member of the Bronx Coalition for a Community Vision.

The rezoning is expected to lead to the creation of 3,250 new apartments capable of accommodating almost 12,000 new people, 723,273 square feet of community facility space, 35,575 square feet of commercial/retail space, and a loss of 47,795 square feet of industrial space and 98,002 square feet of auto-related space. Under the de Blasio administration’s mandatory inclusionary housing law, the city will require a portion of these apartments to be targeted to specific incomes. The city has also committed to a variety of investments and programs to accompany the land-use change, and says that it will subsidize private developers interested in working with the city to build more affordable apartments than are required.

In our tour with Vega-Rivera, we heard her concerns about the rezoning’s potential to exacerbate gentrification in the surrounding neighborhood. Vega-Rivera says she’s not opposed to the concepts of rezoning, but believes the rezoning underway will not create housing truly affordable to local residents and will result in more upscale development that will displace existing commercial and auto-businesses. Vega-Rivera, who has lived in the neighborhood for 37 years, says she is not willing to leave the city and move to the South like some others have done: she values being near her children and grandchildren in the neighborhood, the plethora of cultural institutions, and the convenience of city life.

It’s the fourth rezoning proposed by the de Blasio administration to make its way through the seven-month public review process known as the Uniform Land Use Review Procedure (ULURP) through which a rezoning is approved or disproved. So far, the rezoning has received “approval with conditions” by the three affected community boards and Bronx Borough President Ruben Diaz Junior. At a City Planning Commission hearing in November, residents and advocates raised a number of continuing concerns with the proposal. The City Planning Commission must vote on the proposal by mid-January, and then it will be left to City Council to negotiate the final package.

The City Council has already approved the de Blasio administration’s proposed rezonings in East New York, Downtown Far Rockaway East Harlem and is studying the potential to rezone Bushwick and Inwood. The Bloomberg administration carried out a number of rezonings that did not include mandatory income-targeted housing in areas like Williamsburg and Harlem, and many believe those rezonings fueled those neighborhoods’ real estate boom. Whether de Blasio’s rezonings will be any different is a continued source of debate.

Watch Vega-River’s tour of the neighborhood, and stay tuned for more. This is the first in a series of videos brought to you by our videographer Marc Bussanich that will highlight the perspectives of residents in neighborhoods targeted for a rezoning.