How Advocacy Has, and Hasn’t, Shaped De Blasio’s Housing Plan 2.0 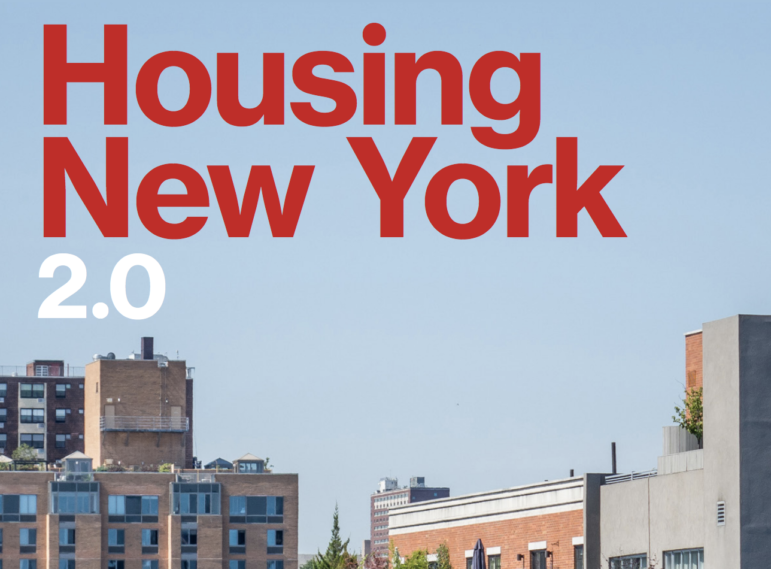 In October, the de Blasio administration announced that it was expanding its affordable housing plan, moving its target from 200,000 below-market units built or preserved by 2024 to 300,000 units by 2026. This Wednesday the administration released Housing New York 2.0, its revamped housing plan. It includes a catalogue of new programs and policies the administration will pursue as it works towards the new goal.

“Now more than ever, we have to build on the momentum that we’ve generated over the course of the last four years,” said Maria Torres-Springer, Commissioner of the Department of Housing Preservation and Development (HPD) at a press conference held in a new 11-story affordable building in the Bronx built by the non-profit developer Settlement Housing Fund in partnership with the administration. She said the expanded plan was warranted because there is “so much need that there is critical urgency, that we have to do more.”

What the revamped plan reveals is that while there remain clear points of disagreement between the administration and its critics—particularly when it comes to the income levels targeted by the plan and the mayor’s neighborhood rezoning strategy—the administration is taking steps to implement several of the policy ideas proposed by advocates within the last couple years.

There’s been a push by advocates to build more affordable housing on both public and privately-owned vacant properties. While in the past the administration has countered that it’s already ramping up its development pipeline for public land and that it cannot control what private owners do with vacant property, Housing New York 2.0 includes some new initiatives on this front. It’s launching “Housing+”,a program that will entail building new below-market rate housing on underused parking lots next to older affordable housing developments such as Mitchell-Lamas. The administration is also committing to building more senior housing on NYCHA land, and says it will start encouraging the construction of “tiny homes” on very small city-owned land parcels. (It’s not clear from the report, though, how large each of these three initiatives will be.) Most startlingly, the administration says that as part of its property tax reform efforts, it will explore a new way to tax privately-owned vacant land to incentivize development.

In the original, 115-page, 10-year housing plan released by the administration in 2014, the word “displacement” is used three times; the word “speculation” never appears. In the new 33-page plan, the word “displacement” is used 10 times and “speculation” thrice—a sign that the administration now recognizes rents are rising not only due to an inadequate supply of housing, but because of dynamics within the housing market.

Under a chapter headed “Develop Neighborhood-Based Anti-Displacement Strategies,” are new initiatives like “Neighborhood Pillars,” which will help nonprofits purchase and renovate 7,500 rent-regulated units in buildings at risk of a speculative sale and “Partners in Preservation,” in which HPD will work with community organizations to develop tailored, comprehensive anti-displacement plans for certain neighborhoods. The city will also make investments to protect 15,000 Mitchell-Lama apartments and support state legislation that would allow housing court judgments to be converted to city tax liens, making it easier for the city to enforce housing code violations.

Some advocates have complained that the administration has not placed a great enough focus on homeownership. The recent announcement that the city would support the creation of a new, homeownership-focused community land trust is one recent step in that direction, but the plan includes a few other small steps: a program called “HomeFix” to help low- and moderate-income homeowners fund repairs, and “Open Door,” a program to finance new co-ops and condos for households making between $69,000 and $112,000 for a family of three. The number of units in the plan dedicated to homeownership has increased by 10,000, or from 5 percent of the earlier plan to 6.6 percent of the new plan.

There’s more, including efforts to promote innovation, like the creation of mixed-income buildings including micro-units for individuals and small households and the expansion of modular construction, as well as proposals geared toward increasing senior housing and encouraging changes in state and federal policy. Overall, the document is a testament to the power of advocacy in shaping the conversation.

Yet while sometimes activists pushed these policy ideas as alternatives to neighborhood rezonings, the de Blasio administration is content to add more tools to the toolkit without tossing its rezoning strategy. The mayor recently suggested the city wouldn’t push a rezoning if it wasn’t working, but at the press conference on Wednesday Commissioner Torres-Springer resisted charges that the rezonings can exacerbate displacement.

“A lot of ink has been spilled about opposition to city rezonings,” she said. “We have to use all the tools that we have and more.” She said that in the Jerome Avenue area, a host of anti-displacement strategies were being brought to bear.

The city still also disagrees with advocates who view either downzoning or building height limits as affordability strategies—such as those in the Lower East Side/Chinatown who have been advocating for the Chinatown Working Group Plan to limit building heights and impose higher affordability requirements.* Arguing that lack of sufficient housing supply is the main driver of the crisis, City Hall spokesperson Wiley Norvell tells City Limits that growth “has to happen everywhere” and that the city can only impose affordability requirements when it provides more density through an upzoning.

Other areas of disagreement also persist, like which income levels should be targeted by the plan. Critics long argued that de Blasio was targeting too many units toward moderate- and middle-income families when statistics show that the market is much harder on the lowest-income households than on anyone else.

In February, the administration expanded the number of units in the plan for households making below $42,950 (for a family of three) from 20 to 25 percent of total units under plan. Advocates saw that as a good if insufficient step. But that’s as far as the administration appears willing to go: 25 percent is still the target in the new plan, though it’s true the city is so far exceeding that goal, building 32 percent of units for such families to date.

*Clarification: The full Chinatown Working Group plan proposed by planners in December 2013 includes a couple instances of modest “downzoning” but it’s not extensive, and in most areas it keeps the same or even encourages greater residential density. It would, however, impose building height limits, higher affordability requirements and other regulations.

15 thoughts on “How Advocacy Has, and Hasn’t, Shaped De Blasio’s Housing Plan 2.0”