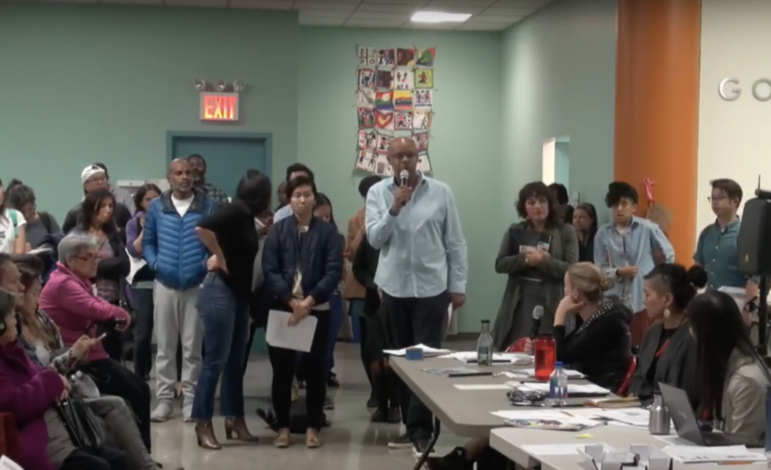 Trevor Holland of TUFF-LES explains the waterfront rezoning that his group and others are proposing to the Manhattan Community Board 3 Land Use Committee on Wednesday, October 18.

On Wednesday night, Community Board 3’s Land Use Committee voted in favor of the board becoming a co-sponsor in an application to rezone the Lower East Side waterfront.* Watch a video of the event here. The discussion about the waterfront rezoning starts at 32:40 and ends at 2:24:28.

As City Limits reported in September, three community groups have decided to initiate a rezoning that would cap building heights and impose additional affordability requirements on parts of the Lower East Side waterfront. It is one of many strategies advocates and tenants are using to block four skyscrapers that developers hope to build in the Two Bridges area of the Lower East Side.

Importantly, the groups involved—CAAAV Organizing Asian Communities, Tenants United Fighting for Lower East Side (TUFF-LES) and Good Old Lower East Side (GOLES)—are not waiting on the Department of City Planning to take up their proposal; they’re taking the rare action of applying for the zoning changes themselves. For a non-government entity, applying for a rezoning is an extremely expensive ordeal. That’s why they were desperate to have Borough President Gale Brewer and the community board agree to be co-applicants, ensuring that fees are waived.

Normally, a community board committee meeting will draw a couple dozen people at most. But on Wednesday evening, the Two Bridges Tower Community Room was filled to its maximum capacity of roughly 200 people. Attendees included a diverse array of residents of the Lower East Side and Chinatown, tenant advocates, Councilmember Margaret Chin and Brewer, Chin’s challenger in the general election Christopher Marte and his supporters, and even a planner, standing quietly in the back, from the Department of City Planning.

Chin, whose backing is crucial, spoke first. She explained her own efforts to stop the immediate approval of the towers with a text amendment. She then announced that the rezoning initiative had her full support, urged the community board to endorse it, and promised “to move this along as quickly as possible.” Deputy Borough President Matthew Washington also said that his office was “very excited to hear about what’s happening in the community, the waterfront rezoning, and to be a part of it,” though the borough president has yet to formally commit to being a co-sponsor.

Organizers with CAAAV, GOLES, and TUFF-LES are trying to pass a subsection of the Chinatown Working Group plan, a comprehensive rezoning plan for the Lower East Side and Chinatown that the de Blasio administration has refused to consider in its entirety. Although the groups say they still support passing the entire plan, they are trying to move forward the waterfront section of the plan first in order to block the skyscrapers, as well as prevent other out-of-context development in the area.

Community Board members expressed some hesitations. One thought it would be difficult to pass the rezoning in time to stop the towers. A few thought the rezoning proposal made unrealistic demands that the Department of City Planning would shut down quickly, like a requirement that buildings provide around 50 percent of the units at below-market rates. While reminding board members that the board had already approved (with some changes) each section of the Chinatown Working Group Plan, including the waterfront section, in prior years, the community organizers expressed a willingness to negotiate and be flexible on the details of the plan.

“I have real reservations about some of the aspects of this, I think it’s unrealistic, but I think at this point we have to be negotiating about what’s going to happen in this area,” one board member said, adding that the four proposed skyscrapers are “so outrageous and so out of scale that we have to sit down and be part of the discussion about reconsidering this area.” She appeared to be voicing a sentiment shared by many members of the committee.

When the public had a chance to testify, many spoke with concern about the potential effects of allowing more luxury development on the waterfront—rising rents, construction hazards, overwhelmed schools—and called on the board to do what they could to stop such development, including co-sponsoring the rezoning. 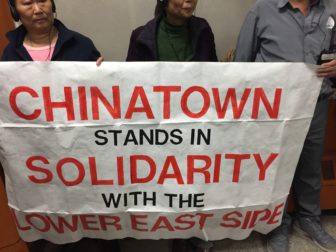 A good number of attendees, however, protested against the idea of rezoning just the waterfront, calling instead for the passage of the entire Chinatown Working Group plan. A NYCHA resident noted that La Guardia Houses is now being targeted for infill development, and argued that the entire Chinatown Working Group plan had to be passed so that public-housing residents could be protected from overdevelopment as well. 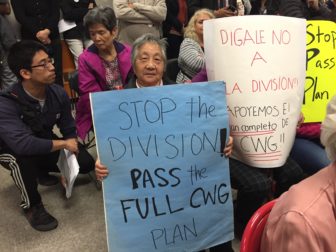 Members of the Chinese community came out in support of immediately rezoning the Lower East Side waterfront…and others came out to insist on the full Chinatown Working Group plan.

David Tieu of Chinese Staff and Workers Association called the effort just to rezone the waterfront and not the rest of the neighborhood “an election year sham that’s being pulled off by Margaret Chin”—though the effort wasn’t launched by Chin. And a member of the Lower East Side Organizing Neighbors (LESON), which has put forth its own plan to stop the towers (that involves conducting a thorough environmental review of the proposed towers and convincing the City Planning Commission that their approval would be illegal under existing rules) accused the board of failing to give their own plan the time of day.

The committee’s final decision, to recommend that Community Board 3 become a co-applicant, means that (assuming the full board approves the recommendation on November 1st) the board, along with CAAAV, GOLES, TUFF-LESS, and possibly Brewer, will be collaborating—and potentially compromising—to come up with a rezoning proposal for the waterfront as fast as they possibly can. As the local Councilmember, Chin will have a critical role to play as the application comes up for final approval.*

* Clarification: updated to explain that the Land Use Committee’s recommendation to become a co-applicant must be officially approved by the full board on November 1st. It’s highly likely the full board will consent. The last paragraph was also changed to clarify roles.

One thought on “To Stop LES Waterfront Towers, Board to Support Community Groups’ Rezoning Effort”