Support
Art at the Limits 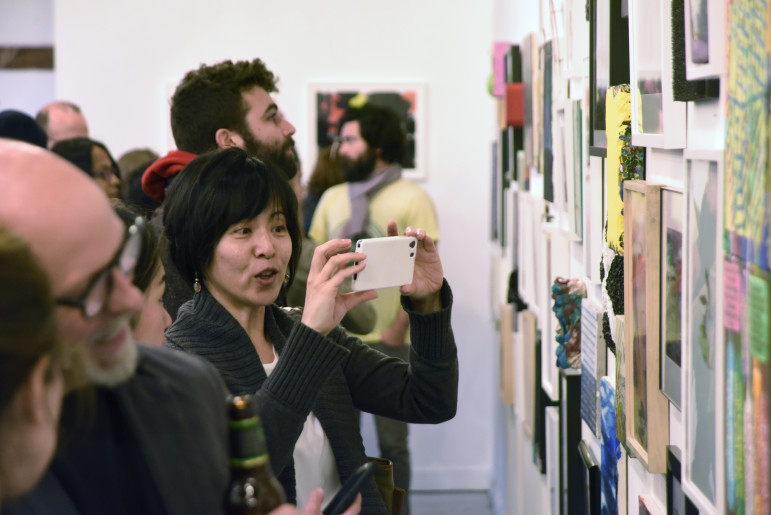 Phil Buehler for Arts in Bushwick

What does it mean to effectively rezone an arts event? To conclude that its programming isn’t serving the community it represents as well as it could be and decide to shift the paradigm under which it’s presented? For Arts in Bushwick (AiB), the all-volunteer, non-hierarchical organization behind the annual arts event Bushwick Open Studios, a weekend that had once been designed to connect Bushwick artists to their surrounding neighborhood had come to symbolize its cultural divide. So in February it was announced that the event would move from June to October.

“Very frequently our event had been used for business interests, whether it be real estate with postcards going out for open houses using very similar branding to Arts in Bushwick or tech companies doing the same,” noted AiB Organizer Nicole Brydson during a town hall meeting in March explaining the decision.

“We found it really dropped off the traffic for people’s studios on that weekend because the folks coming to the neighborhood, they’re going to the parties and not necessarily coming for the art.”

2016 marks the 10-year anniversary of Bushwick Open Studios, and by moving the event to October, Arts in Bushwick is returning the event to the same month it was first held in 2006, when it featured 85 open studios, a film festival, and a group show for artists who didn’t have space.

After its successful first run, the fellowship of artists and volunteers who had participated in the inaugural Bushwick Open Studios formed Arts in Bushwick to organize it again in 2007, this time as a summer event in June.

Writing about the event for The Brooklyn Rail in 2009, art critic James Kalm wryly observed that a cordon of velvet ropes placed before the entrance of one art show during Bushwick Open Studios was “no doubt a jab at the knuckleheaded elites and social-climbing scenesters who’d be attending this kind of affair if it were in Venice, Basel, or Miami.”

By 2011, another Brooklyn Rail dispatch on Bushwick Open Studios reported that the event had grown to include 161 locations, 16 information hubs and hundreds of artists with listed events. In reviewing that year’s event, art critic Hrag Vartanian wrote that “there is a noticeable air of professionalism in the group shows in the area, which is certainly encouraged by the new visibility that Bushwick’s art spaces and artists have been garnering from the mainstream media.”

In 2012, the Bushwick Collective, a street art curatorial project headed by Joe Ficalora, began to host what would become an annual Block Party during the first Saturday in June. A year later the hair coloring studio Pickthorn launched “Color Me Bushwick,” a three-day music and arts festival. The year after that, the inaugural NEWD Art Show set up camp during Bushwick Open Studios at a 7,000-square-foot warehouse space near the L train’s Jefferson Avenue stop.

While events like NEWD Art Show purported to champion the interests of artists by offering negotiated resale rights and hosting panel discussions on gentrification, a look at some of the listed partners for several past arts events held during the first weekend in June turns up at least a few conspicuous names, especially in a neighborhood where rent anxiety is a palpable concern.

For AiB organizer Braslow, the watershed moment came when she noticed a much different turnout for artist Daryl-Ann Saunders’ portraiture series “Pioneers of Bushwick” than the people going to the parties off the Morgan Avenue L Stop.

“A lot of the folks coming wanted to see whatever was highlighted in a blog as the hot show or the big party or whatever,” says Braslow. “Now, there’s nothing wrong with going to a party but if I volunteer to organize an event, I don’t want to spend thousands of hours of my life producing an event that promotes parties.”

After taking a hiatus from programming last August to figure out its next steps, Arts in Bushwick organizers are reemerging with a renewed mandate to make Bushwick Open Studios more welcoming to longtime Bushwick residents, and more inclusive of less commercially successful artists.

Although the family-friendly Community Day Celebration will still be held on June 5th at Irving Square Park, AiB organizers say shifting the bulk of Bushwick Open Studios programming will allow them to implement a larger community outreach component not unlike an election campaign, with volunteers knocking on doors of residents and directing patrons to further flung galleries.

“I want to increase new modes of outreach and make sure that there is an outreach team that’s stable enough to be able to knock on doors and access people who do not have access to social media or a website or anything like that,” says AiB organizer Anthony Rosado, who will be spearheading the effort.

To accommodate more artists, the organization has lowered its registration fee for listing events to $25 and is developing a more dynamic mobile website capable of updating listings in real-time.

But as Bushwick Open Studios heads into its 10th year, it looks as though the battle for Bushwick’s cultural cachet they bring in the month of June is only just beginning. This year, the Bushwick Collective will unveil its own open studio format, complete with an app for artists to register events that was donated by the real estate broker firm, Nooklyn.

Additionally, Bushwick-based web developer and blogger Brandon Mickman is using the weekend to debut the Bushwick Arts Festival to respond to what he sees as an unmet void for artists who were disappointed by the shift of Bushwick Open Studios to October.

During their town hall meeting, Arts in Bushwick organizers noted that they were exploring ways of expanding their programming beyond the frenzied bottleneck of a three-day weekend, both by extending the run of its annual Seeking Space show to several weeks, and by publishing a book looking back on the organization’s first ten years called “Making History.”

That book, which will feature the work of 400 artists, will also feature an anthology and series of essays on gentrification, displacement and community building. It will also no doubt capture a pace of change in Bushwick that would have had to have been seen to be believed.

* * * *
City Limits’ coverage of the intersection of art, politics and policy in New York is generously supported by the Laurie M. Tisch Illumination Fund.