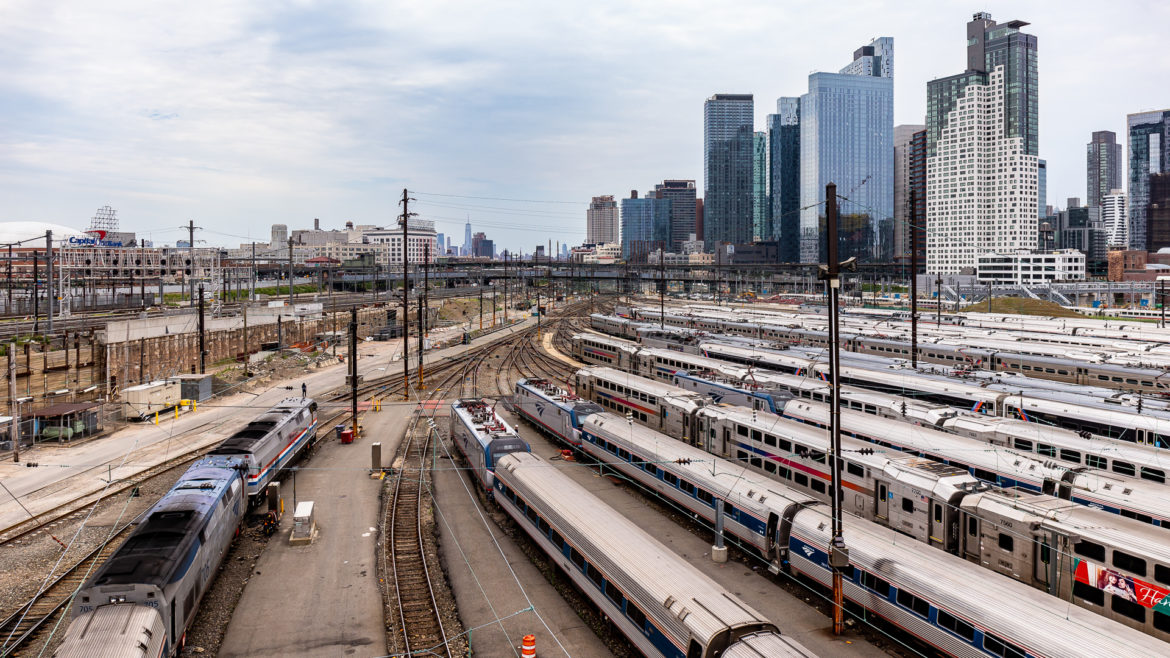 A 2017 Sunnyside Yards feasibility study proposed scenarios that included up to 24,000 units of housing—including up to 7,200 affordable units—in residential buildings as high as 69 stories, surrounded by as much as 52 acres of open space.

Over the last year, the quasi-private, city-affiliated NYC Economic Development Corporation (EDC) has been peddling yet another megaproject for southwestern Queens. This time the proposal focuses on decking and developing over Sunnyside Yards. Through a series of public meetings the agency asked residents to imagine and think big about how this new development could meet community members’ needs and solve the ongoing and exacerbating challenges they and their neighbors face.

But as organizers and activists have asserted from the beginning – most recently with a public statement signed by 43 grassroots groups across the city and a press conference on November 25th – development over Sunnyside Yards cannot address the challenges Queens’ communities are facing. Further still, development of Sunnyside Yards is emblematic of a broader and fraught city-building process, which is churning communities across the city and displacing working-class communities while building new neighborhoods for wealthier, whiter households. To boot, we also know that the real winners of this remaking of our city are already-wealthy real estate developers and private equity firms.

More to this point, grassroots opposition is rooted in a holistic understanding of past and present development across our neighborhoods. This broader scope renders Sunnyside Yards and the underlying development agenda as one that reifies and exacerbates existing inequalities and promises the continuation of past state-led harm. Through this expanded scope, the only responsible decision to development over Sunnyside Yards is “NO!”.

To understand this further, let’s recall the evening of April 30th, 2019 when EDC held a “public workshop” regarding development over Sunnyside Yards at the Jacob Riis Neighborhood Settlement, a community center in the heart of Queensbridge Houses. The focus of this workshop was “sustainability and green infrastructure”, and after outlining the “who”, “what” and “where” of the project’s planning process, they shifted to talking about climate change in NYC. An introductory slide highlighting Sandy’s 44-person death toll, $19 billion financial loss, and the deadly-nature of worsening extreme temperatures suggested the agency was aware of an impending crisis. And yet nothing suggested they were aware of the ongoing crisis that already existed in the place where they stood.

NYCHA tenants on the whole, including those living in the local campuses of Queensbridge, Ravenswood, Astoria and Woodside Houses, are living with $25-32 billion worth of unmet capital needs. This means buildings are deteriorating around residents as they work to make a life for themselves and their families. Most commonly we hear about the outdated boilers, unreliable heating systems, or the lead paint, but residents also have mold, rodent infestations, large appliances in disrepair, cracked and leaking pipes, broken windows and elevators and more. These issues are not new, and have been worsening exponentially with time, in tandem with state and federal funding cuts. More so than the growing price tag needed to remedy this situation, it’s tenants’ health and quality of life that are on the line.

The city’s consistent response to the declining habitability of these buildings and units has been that in our $90+ billion annual budget, there is no money. Instead, their solution is to outsource management and repairs to predatory equity firms through a program that we know—and the city knows—will displace existing residents.

And yet, for the succession of megaprojects the city has proposed for the region including Sunnyside Yards, there are always billions of dollars available. Specifically, $2.7 billion for the Brooklyn-Queens Connector (BQX); $3 billion in public subsidies for Amazon HQ2; and if Sunnyside Yards is anything like its predecessor Hudson Yards which cost taxpayers $5.6 billion, then this project will not only follow suit, but it will be the most expensive in the trifecta.

These patterns of public investment are evident in relation to smaller-scale projects as well. The city recently allocated millions of dollars for community resources in Hallet’s Cove, the peninsula that’s also home to Astoria Houses. This investment directly coincides with a new private development that borders and will soon overshadow its NYCHA neighbors.

Paradoxically, this investment roughly equates to the amount needed to replace the boilers in Astoria Houses which could provide tenants with reliable heat and hot water. It is not fair to say that Councilmember Constantinides forgot about the peninsula’s existing residents. However, the $1 million he allocated to improve security and lighting for Astoria Houses’ residents does nothing to improve the habitability of residents’ apartments and buildings, and quality of life overall.

Similarly, the city’s $180 million investment strategy to address infrastructure needs in Long Island City claims it will address capital repairs at Queensbridge and Ravenswood. However, the plan for the fastest growing neighborhood in the US offers no specifics. Moreover, the plan’s accompanying press release allocates $95 million for sewers and water mains, $60 million for a new school, $10 million for transit, and $15 million for park improvements. Totaling $180 million already, this suggests none of the money has actually been allocated to address repair needs in Queensbridge and Ravenswood.

In justifying these patterns of public investment, the city’s long-time promise has been jobs. Yet, data showing employment trends in LIC (zip code 11101) between 2002 and 2015 suggests an inverse relationship between development and employment for public housing residents.

Under Mayor De Blasio, the city’s main promise has been “affordable housing”. Yet, as activists and advocates from around the city have made clear – the number of “affordable” units is far too few, and their “affordability” is not deep enough.

For example, the 20% of “affordable housing” included in the 2,400-unit Hallet’s Cove project serves households earning at minimum $34,355 per year, which is more than one full-time, minimum wage worker in NYC can earn from one job. Moreover, this meager fraction does not even begin to meet the needs of the 400,000+ public housing residents, the hundreds of thousands on waiting lists, the 62,000+ residents sleeping in city shelters nightly, or the thousands more sleeping in subways, parks, streets or doubled and tripled up with friends and family.

Meanwhile, exorbitant monthly rates for the 80% “market-rate” apartments are bolstered and justified by the new community resources, which ultimately enhance the appeal of the neighborhood to wealthier residents and ensure developers’ profit margins are met. Moreover, high market-rate values diffuse outwards from these new developments, driving up land values across the region, and intensifying housing insecurity for existing residents.

While the profits of landlords and developers soar, tax breaks further inhibit the city’s ability to address the needs of the populations excluded and harmed by these decisions. The city claims that tax exemption programs like 421-a are necessary for enticing private developers to build affordable housing. They fail to mention the billions these programs cost us each year. Nor do they highlight that nearly 80% of developments receiving 421-a exemptions offer no affordable housing in exchange.

This reading of the context highlights a class-based nature of current patterns of public investment and city-building. It also highlights a race-based exclusionary nature. More than ninety percent of public housing residents and the city’s sheltered population are Black and/or Latinx. Households of color are similarly overrepresented among working-class and lower-income households, and when we look at the spatial distribution of race in southwestern Queens over the last two decades, we see that the Black community remains concentrated in public housing while the areas experiencing new development have seen an influx of whiter residents.

Race-based exclusions are evidence of past, often state-led, racially-discriminatory policies like redlining, urban renewal, and planned shrinkage, which locked working-class communities of color out of consideration or benefits related to city-building. Projects like Sunnyside Yards reify past harms while also extending this collective legacy of state-led disinvestment and violence imposed on working-class communities of color into the present, and potentially the future (EDC says Sunnyside Yards will be a reality in 50-100 years).

This trajectory of city-building becomes disturbingly grim when we look more broadly at the city’s budget-allocation decisions; specifically the recent decision to allocate $11 billion to build four new jails across the city. Working-class communities of color suffer disproportionately from policing and imprisonment. Taken together with land use decisions like Sunnyside Yards, but also “smaller” developments like Hallet’s Cove, these decisions suggest that the city is more interested in building cages to warehouse working-class communities of color rather than taking any steps to improve their quality of life and well-being.

It is from this reading of the context that grassroots groups are rejecting development over Sunnyside Yards and calling for a moratorium on new major development across the city.

In remaking their approach, the city should center community needs while locking out real estate interests; abolish the EDC who itself benefits financially from gentrification; and rework its budget priorities and city-building practices, beginning with allocating all $32 billion needed to make public housing habitable, as is humane and their legal responsibility.

Until these demands are met, you will find more and more residents from across the city standing together, disrupting public meetings, and halting city plans.

Kristen Hackett is a member of the Justice For All Coalition (https://j4ac.us/), a group of LIC and Astoria residents fighting for dignified housing, good jobs and just development in Western Queens, and a doctoral candidate and fellow at The Graduate Center, CUNY. More info at https://kristenhackett.info/.