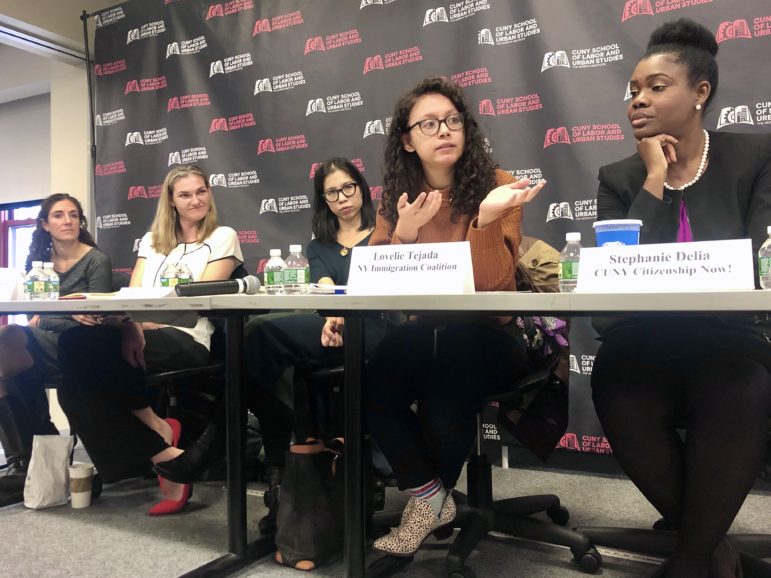 Immigration experts took part in a panel about the Public Charge rule, hosted by Make the Road New York, the Consortium For Worker Education and CUNY School of Labor and Urban Studies.

The injunction was hailed a victory by immigration advocates, who argue the administration’s proposed rule would unfairly target low-income immigrants of color. And while the court rulings mean no changes can happen for now, the proposal has already had a chilling effect on New York’s immigrant communities, eliciting worry from many despite the fact that the rule — if it does go into effect — would only impact a very specific group of applicants, experts say.

“This rule, this change that they’re trying to put into effect, it actually touches very few people. Public Charge as a test does not apply to all immigrants, does not apply to all immigration applications,” says Sonia Lin, of the Mayor’s Office of Immigrant Affairs, which has been conducting outreach to help dispel some of the rumors and misconceptions about the proposed policy.

“It’s just created a ton of confusion and fear,” Linn explains, adding that some immigrants are now needlessly wary of applying for or continuing to access public benefits out of fear it could impact them negatively. “It means that people are staying away from city services and resources that they’re legally eligible for, and that they really may need for themselves or their family members.”

Linn was one of several experts who spoke Friday during a panel about the Public Charge hosted by Make the Road New York, the Consortium For Worker Education and CUNY School of Labor and Urban Studies. Here’s an overview of what they had to say.

For now, nothing. Since the courts issued a temporary injunction, the proposed rule can’t be implemented until another legal decision is rendered.

“We don’t know when it will, and if it will, go into effect. That right now is going to get determined in the court,” said Becca Telzak, director of health programs at Make the Road New York. “For now, everything is stopped.”

What is ‘Public Charge’ and what does the current policy say?

According to Make the Road New York, Public Charge is a screening tool used by U.S. immigration officials when immigrants apply for a green card to stay in the country permanently, as well as for those abroad who are seeking to enter the country as a green card holder.

Since 1999, the rule has been used as a test about whether an applicant is likely to become “primarily dependent on the government for subsistence,” specifically looking at whether they would, in the future, be on cash welfare benefits such as Social Security Income (SSI) or Temporary Assistance for Needy Families (TANF). The current policy also considers whether an applicant is likely to require long-term institutionalized care in a government-funded facility, says Make the Road immigration attorney Jessica Young.

“That’s very narrow. In immigration practice, we don’t see many people come under that rule, and so for a long time it wasn’t a big consideration when people were going to apply for their green card,” she said.

The test is most commonly applied to those submitting family or employment-based green card applications, Young says. It does not apply to applicants who are refugees, asylees, U visa holders, domestic violence survivors with Violence Against Women Act (VAWA) status or juveniles with protected immigrant status.

Current green card holders are also not impacted by the rule, with the possible exception of those who leave the country for more than six months, Young says. The Public Charge would not impact a green card holder when they go to apply for citizenship, she adds.

What changes has the Trump Administration proposed to the rule?

The Trump Administration proposed a new Public Charge rule in August that would look at whether an applicant is likely to receive one of more of certain public benefits during 12 months of a three-year period. In addition to considering if an applicant will likely receive the cash assistance benefits mentioned above, the proposed new rule would expand that list to include benefits like federally-funded Medicaid, SNAP or food stamps as well as some housing assistance, like public housing or Section 8.

But experts note that most of the people who are eligible for the benefits in this expanded list already have their green card or citizenship, or receive a state-funded versions of such benefits, and so wouldn’t be affected by the change if it does indeed get implemented someday.

“A majority of the people using these benefits are not the people who are impacted by this rule,” Telzak says.

A number of other public benefits would also not be affected by the proposed new rule, such as Medicaid for pregnant people or those under 21 years old, Emergency Medicaid or WIC benefits. Use of health care services, hospital services or food pantries would also not be considered under the proposal, and applicants applying for benefits on behalf of their children would not see that impact their chances.

The Public Charge rule also does not effect someone’s eligibility or ability to apply for public benefits, and both Young and Telzak stressed that immigrants should continue to apply for and receive such benefits, including those named under the expanded new rule.

“You could sit here today and say, ‘Even if I’m eligible for food stamps in the future, I’m not going to apply because I don’t want to depend on it.’ But that doesn’t matter what’s going to matter is, what is the ‘totality of the circumstances’ of that individual who’s applying for the green card?” says Young.

Factors that would be taken into consideration as part of that “totality of circumstances” — should the new rule one day be implemented — would include things like an applicant’s age, health, family size, education, language skills and financial status. Specifically, if the applicant earns less than 125 percent of the poverty line, that could be considered a “negative factor,” under the proposed guidelines.

“If you earn a certain amount that makes you eligible for the public benefit, whether or not you get the public benefit is not going to increase or decrease the likelihood of you getting approved for the green card,” said Stephanie Delia, an attorney with CUNY Citizenship Now! “Your eligibility is what matters.”

Though the federal injunction has hit pause on implementation of the new Public Charge rule, the Department of State — which oversees the U.S. consulates, and therefore considers green card applications from people living abroad — has indicated that it plans to go forward with its own version of the new rule, since the court injunction only applies to the Department of Homeland Security.

This could potentially mean that those abroad who are applying for a green card may be impacted, though Young stressed that no changes have taken place as of yet.

“Their forms that they need to implement their rule at all the U.S. consulates are not ready,” she says. “So we have a little breathing room until our community is maybe subject to this rule abroad.”

If you’re worried, what should you do?

The panel members once again stressed that the new rule has not yet been implemented, and it’s unclear when or if it ever will.

Those who have questions about their individual circumstances should get a consult with an immigration expert, she adds. There are a number of free public resources available, including the city’s ActionNYC hotline, which can be accessed by calling 1-800-354-0365 between 9 a.m. and 6 p.m. Monday to Friday, or by calling 311 and saying “public charge.”

Immigrants who are eligible to apply for a green card, either in the states or abroad, should apply now if possible, according to Delia of CUNY Citizenship Now!

“I think people forget how difficult it already is to get a green card in this country. It is not simple, it’s already complicated, it’s already tough. So my theory is, if we’re getting these green cards now despite all these hurdles we already have, don’t panic about your inability to do it,” she added. “Come to the experts, and focus on fighting the fight.”

CUNY Citizenship Now! also offers free assistance with green card and other immigration applications; more information can be found at their website.

0 thoughts on “After the Injunction: Trump’s ‘Public Charge’ Rule, Explained”