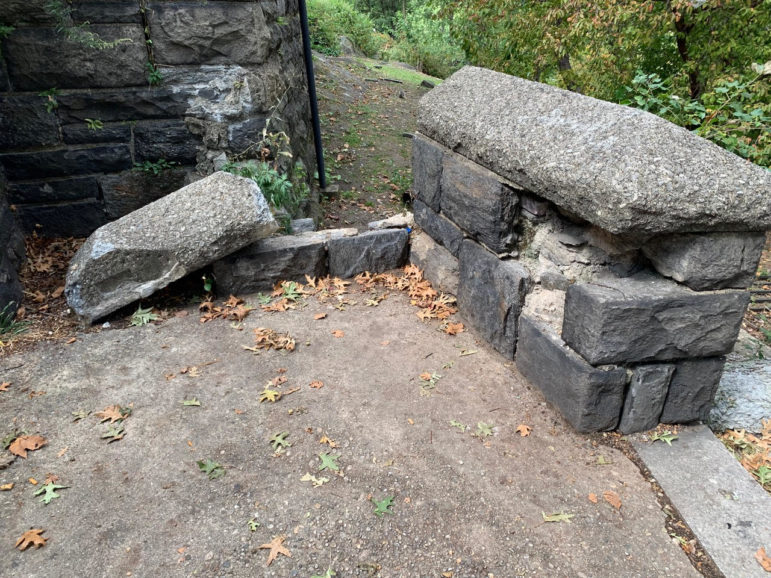 The way Parks Department capital projects are funded makes it hard for unsexy projects like stone repairs and drainage to get priority.

As the Parks Department nears completion of a restoration of the historic mid-19th Century watchtower that sits at the highest point in Marcus Garvey Park, signs of a greater need for maintenance are visible. On a recent walk through the central Harlem park, elements of retaining walls and stairs that make up the park’s central acropolis were crumbling.

Along the staired pathway leading up to the central acropolis, stone from the retaining walls had completely disappeared in some places, leaving jagged stones or major gaps. In others, the large bricks simply lay on the path or directly adjacent. All along the pathway, elements of the fencing were missing in places and make-shift chain-link patches were interspersed.

These are all signs decades of too little maintenance funding and of a greater need facing aging parks across the city—something advocates says could amount to a looming crisis.

Across the city’s older parks, elements like retaining walls, drainage systems and pathways are showing signs of age as many of them were built in the early 20th century. The parks department has taken some steps to fix them—$135,000 for a retaining wall in Riverside Park; $91,000 for a stone wall in Inwood Hill Park—and also some major ones: $30 million for a comprehensive renovation of Highbridge Park under a program designed to steer capital towards historically neglected parks.

But the department’s relatively low priority in the budgeting process means there is a great unmet need for capital.

The Parks Department needs $615.5 million in capital funding, according to the city’s most recent annual budgeting review.  That number likely underestimates the full need, though, as the Parks Department does not have a comprehensive inventory of capital needs and the reported number explicitly excludes ‘most equipment’, ‘landscaping and outdoor elements,’ ‘special operating systems within fixed assets,’ and ‘components not readily observable by professionals in the field.’

A pilot assessment, looking only at turf fields, recreation centers, “comfort stations” (restrooms) and retaining walls, began in 2017 and is ongoing but a full assessment that looks at other parts of parks is sorely needed, advocates say.

From 2007 to 2017, an average of 13.7 percent of the Parks Department’s stated capital needs were funded each year according to a report by the Center for an Urban Future (CUF). That report took a comprehensive look at aging infrastructure in the city’s parks system and warned of a coming crisis if funding levels are not increased. It estimated that the parks system will need $5.8 billion in investment by 2028.

Signs of disrepair similar to those in Marcus Garvey Park are visible in other northern Manhattan parks. A walk through Riverside Park revealed a staircase that is completely out of use and others where stonework is misaligned.

In St. Nicholas Park, a centrally-located stairway is entirely closed and completely overgrown with vegetation. In Morningside Park, a stone stairway shows a significant need for maintenance.

To be sure, these parks are not crumbling. They are, for the most part, beautiful flora-filled oases from the concrete landscape. On a recent October day, grass in each was well trimmed and plant life was healthy; a new playground in Morningside park was full of children. A new comfort station is currently being built in Marcus Garvey Park.

But the missing and misaligned bricks and flooded areas are ominous signs, especially given the stresses our parks can expect as a result of climate change.

The pool in Marcus Garvey Park, built in the 1960s, likely needs work too. None of these are on the city’s capital projects tracker.

A major reason behind the large need for repairs appears to be the system by which capital projects in parks get funded. “With a slim baseline budget for capital work and limited funding through community boards, the department’s capital budget is largely cobbled together through discretionary funding, allocated by 51 City Council members, five borough presidents, and the mayor,” CUF found in its report. “This system makes it challenging for the Parks Department to prioritize funding for the most urgent infrastructure needs.”

It makes it especially challenging to get  unsexy and difficult projects like drainage and retaining walls funded, sources tell City Limits. “It means, you can do playgrounds, you can do facilities, but you couldn’t do systems—retaining walls, drainage system,” says Charles McKinney, who was formerly the Riverside Park administrator before becoming chief of design for the Parks Department.

“If you had a large park, you had to make sure that the Council people know what the concerns were and coordinate that with the community board so everyone was asking for the same thing,” he says.

“The time it takes for projects often goes beyond the term of any one councilmember,” says Lynne Kelly, executive director at New Yorkers for Parks, an advocacy group. “It leaves them in a state of frustration because they don’t get to see the results during their term.”

The system of funding also means that in districts where other capital needs are greater—say, for schools, streets or other city infrastructure—parks can’t be prioritized.

“A councilperson has many demands on his or her limited amount of funding. There were some neighborhoods that had so many needs that parks didn’t get much funding for many years. Those were the parks in the poorer repair,” says McKinney.

The funding for the watchtower in Marcus Garvey Park is a good example of how this system plays out. According to the Marcus Garvey Park Alliance, contributors to the $7.9 million project have included then-Councilmember Inez Dickins and her successor Bill Perkins, Comptroller Scott Stringer, Manhattan Borough President Gale Brewer, The Central Park Conservancy and the Parks Department itself.

The Central Park Conservancy just announced a $150 million project to renovate the northern end of Central Park, an area with some similar problems to Marcus Garvey Park: an aging pool and retaining walls. $50 million of that funding will come from the city, while the Conservancy plans to spend $100 million.

Critics argue that the prominent role of conservancies in financing key infrastructure restoration  more repairs in parks near wealthier neighborhoods.

Newly released reports by New Yorkers for Parks lend some credence to this argument. The organization singled out Long Island City, Bushwick and Bay Street, finding that each failed to meet a majority of standards that include total open space, access to these spaces, tree canopy in the area and maintenance.

It encourages the use of private money for parks, saying that parks with ‘friends-of’ groups do significantly better than those without, and private funding for some parks allows city resources to be steered elsewhere. For example, in addition to maintaining Central Park, the Central Park Conservancy, maintains the lawns in St. Nicholas, Marcus Garvey, Jackie Robinson and Morningside parks and the city doesn’t have to.

Its positive impact on the park is clear, though. The organization organizes volunteers to do maintenance regularly and draws the attention of the community board, parks department and elected officials to the park’s needs for repairs and maintenance

While there is a significant backlog of capital projects in need of funding, city-wide, advocates say funding for routine maintenance through a yearly budget allocation is just as important.

“We view maintenance and capital investments as going hand in hand. Unfortunately, that’s not always the way it is in terms of planning for projects,” says Kelly.

Kelly and her allies scored a huge victory with $44 million more in operations funding allocated to the parks department than had been in previous years. That money will go to hire much needed staff: 200 park workers, 100 gardeners, 50 park rangers and 80 park officers. $9.6 million the $44 million is baselined to be allocated again next year.

“We would argue that parks are critical city infrastructure, especially now, during climate change, you need to fund repairs and infrastructure just like you would fund repairs for other critical needs like affordable housing and education.” says Kelly. Climate change is expected to increase the amount of heavy rain and extreme temperatures, putting pressure on the natural environments. Heavy rain, for example, can overwhelm old drainage systems and causes erosion, which could be damaging to old retaining walls. Officials say the effects of heavy flooding are already visible in some parks.

Requests for repairs of the acropolis in Marcus Garvey have been in the community board’s annual statement of needs for the past two years. The parks department says that it will request funding for the acropolis repair this year.