Opinion: 14 Reasons Why Citi Bike in Bushwick is a Bad Idea

By Robert Camacho and Celestina Leon. 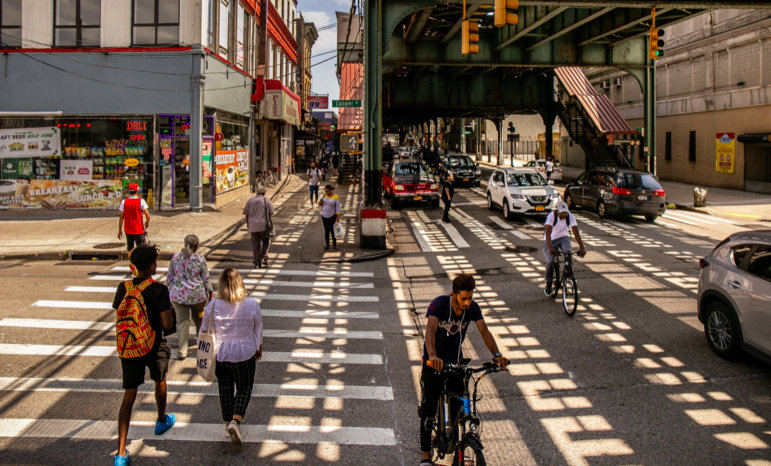 'The fourteen proposed stations along Bushwick and Broadway highlight the reason why Citi Bike in Bushwick is currently a bad idea, as those stations may indicate to cyclists that both avenues can support cycling even though they barely support the current vehicular and pedestrian traffic.'

At some point every day, we traverse Bushwick Avenue. During the morning and afternoon rush hour, cars, trucks, and buses make their way to their destination; typically going to and later returning from work. The traffic gradually decreases, although it remains busy throughout the day, as various commuters utilize the corridor, including the rare cyclist braving the unpredictable road and traffic conditions.

According to the NYU Furman Center’s State of New York City’s Housing and Neighborhoods in 2018, the population in Bushwick has increased from 120,710 in 2000 to 140,474 in 2017. The majority of the bordering community districts have seen population increases, as well, furthering the overall gentrification of northern Brooklyn and the Ridgewood neighborhood of Queens.

With an increase in population and socio-economic diversity, the need for efficient means of transportation has grown simultaneously. “More New Yorkers than ever before are embracing cycling as a convenient and affordable way to get around—in the last decade alone, annual bicycle trips rose 150 percent, noted the NYC Department of Transportation in the executive summary of their 2017 Safer Cycling Bicycle Ridership and Safety in New York City.

On August 27, 2019 the DOT Brooklyn Borough Commissioner’s office sent a letter to the community board detailing Citi Bike’s Phase III expansion, which was announced by Mayor de Blasio in July. “In CB4, there are 46 Citi Bike stations planned for this fall, bringing the total to 61 stations,” noting public outreach was conducted online. Earlier this year, the board’s office received a similar letter describing the initial expansion plans, which was immediately met with a response letter from us urging additional community engagement to prepare for the rollout.

As public servants who are also cyclists, we understand the importance of having an alternative and more affordable means of transportation. However, we urge Commissioner Polly Trottenberg and Mayor Bill de Blasio to reconsider the consequences of expanding Citi Bike in Bushwick, specifically along Bushwick Avenue and Broadway, without additional engagement and investment in safety improvements.

This summer, there was a city-wide spike in fatal cyclist collisions, including on both Bushwick Avenue and Broadway. Fourteen of the forty-six stations scheduled to be installed this fall are on Bushwick and Broadway. For more than several years, both avenues have been included in Community Board 4’s annual Statement of Community District Needs, specifying the need for further study and investment in revitalization.

In preparation for the fiscal year 2021 statement and budget consultations, we have repeatedly reiterated the importance of investing in the appropriate safety and general infrastructure to support all commuters. Without these types of investments everyone, including cyclists, will be at risk of injury or a fatal accident. The fourteen proposed stations along Bushwick and Broadway highlight the reason why Citi Bike in Bushwick is currently a bad idea, as those stations may indicate to cyclists that both avenues can support cycling even though they barely support the current vehicular and pedestrian traffic.

Too often the comments of community boards are over-simplified when it comes to bikes and/or bike lanes. We are quickly labeled as “pro-car” or “anti-bike” without further attention to the root concerns and asks.

Community Board 4 continues to advocate for projects that improve the quality of life for all residents. We continue to work closely with all our elected officials and agency liaisons to do so, recommending increased accountability, education, and enforcement when it comes to cycling projects in Bushwick.

The next time you’re driving or otherwise find yourself on Bushwick Avenue or Broadway ask yourself, “Do I feel safe? Are the streets safe for children and older adults? Would I encourage people to bike or use Citi Bike here?”

We want to hear from you. And, more importantly, so should the NYC Department of Transportation.

Robert Camacho is the Chairperson and Celestina Leon is the District Manager of Brooklyn Community Board 4, which represents the neighborhood of Bushwick. Its boundaries currently extend from Flushing Avenue on the north, Broadway on the southwest, the border with Queens to the northeast, and the Cemetery of the Evergreens on the southeast. Brooklyn Community Board 4 meets on the third Wednesday of the month, except during July and August, at the Hope Gardens Multi-Service Senior Center located at 195 Linden Street unless otherwise announced. All meetings are open to the public.

11 thoughts on “Opinion: 14 Reasons Why Citi Bike in Bushwick is a Bad Idea”