It’s Been Slow-Pedaling for Bike Infrastructure in Bushwick 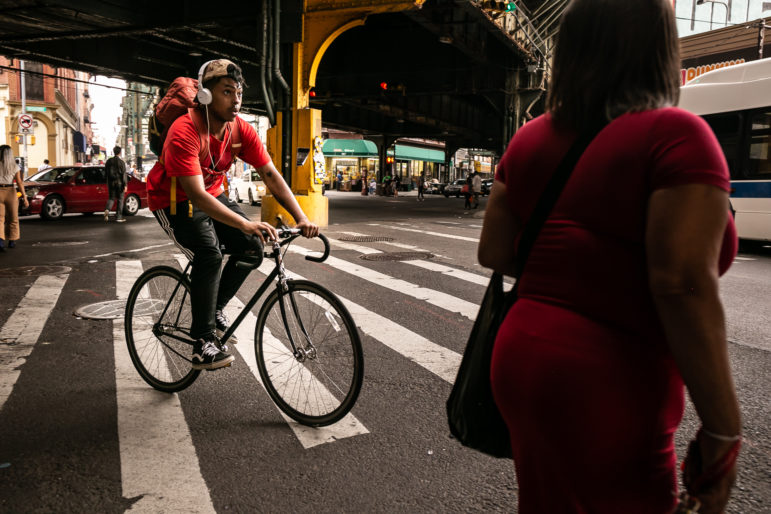 Last year, 93 cyclists were injured in Bushwick and this year, 24 have already been injured, according to data from Vision Zero.

Tens of thousands of dollars worth of vintage Schwinn bikes hang upside down, dangling over a red Mazda convertible in a garage on Harman Street, in between Knickerbocker and Irving Avenue. They belong to the Classic Riders, one of the only bike clubs left in Bushwick.

The neighborhood birthed a citywide trend of bike clubs. The Puerto Rican Schwinn Club started in a garage in Bushwick 35 years ago, as a way for the large population of Puerto Ricans in the neighborhood to feel closer to each other and to the island.

“All the bicyclists landed in this neighborhood,” says Eddie Gonzalez, president of the Classic Riders. “For some reason, we ended up very close to each other.”

In 2009, City Limits took a deep look at Bushwick, the neighborhood at the center of the city and the crossroads of many important trends. A decade later, the editorial team spent the month of July 2019 in the neighborhood, producing this story and others.

Gonzalez, 55, says Schwinn put a factory in Puerto Rico back when he was a boy, and their bikes, which back then might sell for $25 a pop, became ubiquitous around the island. They represented a kind of freedom to the working-class man, allowing him to travel anywhere cheaply.

The clubs serve as a reminder amid gentrification and bougie, white-owned bike shops popping up in Bushwick: Bikes were once a symbol of the working class.

“They were cheaper for us, for the poor man,” Gonzalez says. “They made them so good that they would last forever.”

The Classic Riders rode in Bushwick’s Puerto Rican Parade this year, the neighborhood’s first official one, and they often take trips to Coney Island or the Bronx. But you wouldn’t find them at the cyclist mass “die-in” at Washington Square Park earlier this month, protesting the death of now 17 cyclists this year.

Despite being a staple in Bushwick’s bike culture, the neighborhood’s Schwinn clubs aren’t your traditional bike activists. In fact, Gonzalez and other members harbor the same misgivings about pro-bike policies that one hears from skeptical New Yorkers who never move around on two wheels.

Jorge Bermudez, 33, who joined the Classic Riders when he was just 14, says he doesn’t see the point in the neighborhood investing in more biking infrastructure.

“The city’s gonna spend all this money and it’s not even going to be used,” Bermudez says.

It’s as if the club is teetering on either side of Bushwick’s bike debate. The neighborhood has been in the middle of a tug-of-war between some local leaders and citywide policy.

The city’s Department of Transportation has continually singled out Bushwick as a key neighborhood for growing bike infrastructure, but this often puts it at odds with Community Board 4, which has treated the neighborhood bike projects with hesitation.

As the streets become more crowded, advocates say that Bushwick must decide which stakeholder is more important: drivers who are continually losing parking as the neighborhood gentrifies, or cyclists and pedestrians who often face hazardous conditions.

Community control vs. a citywide push for bike lanes

Community Board 4 District Manager Celestina León says that in the past, the board would get steamrolled by city agencies, especially DOT and the Department of City Planning. Projects would be completed with little input from the community.

This changed when the bike lane debate emerged. It was in 2015.

“There were actually meetings throughout the neighborhood,” León says. “It was a little bit of everyone, you got the pedestrian and driver perspective. DOT would come out and give presentations on different kinds of bike lanes. It was really informative.”

Ultimately, the board voted to approve the first set of bike lanes, on Knickerbocker Avenue, Irving Avenue, Hancock Street and Cornelia Street.

“This was probably one of the iconic votes of the board,” León says. “It passed by one vote.”

Bike lanes were controversial for two reasons, León says: parking and safety. Bike lanes do decrease parking space, León says, and when drivers are tempted to double park, it puts everyone at risk.

“Folks know they’ll get ticketed if they’re in that bike lane in any capacity so they’ll park in the middle of the street,” she says. “It creates a hazard.”

For this reason, the board voted against the next set of bike lanes DOT proposed. But the agency built them anyway, León says. DOT declined to answer questions about past or current projects.

“The DOT presents a plan to redesign the street to a community board, and the community board will typically express disapproval in one way or another, related to a component of a plan that would infringe upon space that is currently dedicated to moving or storage of motor vehicles,” Cutrufo says. “So the DOT comes back with watered-down plans.”

When transportation projects get stalled, Cutrufo says, it’s often because of community boards. And these boards don’t reflect the makeup of the entire neighborhood, he says.

“They’re often whiter, richer, and more likely to own a vehicle,” Cutrufo says. “And when you own a vehicle, and you park it on the street, you tend to see transportation planning through the lens of a windshield.”

Cutrufo says that bike lanes can only make the streets safer. And Bushwick Councilmember Antonio Reynoso agrees with him.

“I think change in general makes people upset in the city of New York, but bike lanes, especially,” Reynoso says. “But we’ve seen that when we installed the bike lanes after a couple of months, there’s almost no concerns.”

In November 2017, Emma Wingfield rode her bike down Morgan Avenue, on her way to teach a yoga class at a Bushwick studio called Loom. She stopped at a red light where the avenue splits into two one way roads: Knickerbocker and Wilson. She was in a narrow yellow sliver in between two opposite lanes of traffic. It was technically a bike lane, where cyclists could stand while waiting to turn left.

She had one foot planted on the ground, waiting for her light to turn green when a turning New York City Department of Sanitation truck seemed dangerously close to hitting her.

The right side of the garbage truck clipped her left shoulder and leg, and proceeded to pull her bike underneath its wheels. She pivoted back to save herself from being pummeled, but the bike was destroyed and she was bruised all over her left side.

It took six months and a deposition for Wingfield to get the City’s Comptroller’s office to pay for her medical bills. And the city didn’t offer to replace her bike, she says. DSNY confirmed that the crash happened and Wingfield was taken to a hospital, but declined to comment on anything else.

For Wingfield, whose bike is her primary mode of transportation, it was emblematic of the danger truck and car traffic poses to Bushwick bikers.

Last year, 93 cyclists were injured in Bushwick and this year, 24 have already been injured, according to data from Vision Zero, Mayor Bill de Blasio’s plan to improve street and transportation safety released back in 2014. According to data from NYC Crash Mapper, in the last five years, only 37 crashes resulting in a cyclist injury were determined to be caused by cyclist error, while 160 injuries were caused by driver inattention or failure to yield right of way.

“The trucks don’t really look for you,” she says. “And then you could be going down a street and a truck is reversing back and they don’t see you. There seems to be no kind of rhyme or reason, no rules around the road in the area at all.”

León agrees that truck traffic, in particular, has come up as a problem in the neighborhood. Truck routes fall along Myrtle Avenue and Broadway, but León says that residents often complain that trucks run on side streets. She says that the community board has continually requested that the city update signage on side streets that say trucks can’t drive there.

However, León thinks cyclists could also be better about sharing the road, especially those who ride bike shares like Citi Bike or Revel mopeds.

“We’ve seen joyriding around Irving square park, on the street, jumping onto the sidewalk,” León says. “There was a man, a woman and baby without helmets on the Revel mopeds going up Myrtle Avenue taking selfies.”

Citi Bikes were another point of contention between DOT and the community board, León says.

In December of 2018, León says that DOT announced it would be putting a set of temporary Citi Bikes in Bushwick as a trial run. There were going to be six bike racks and the board was assured there would be little to no loss of parking, León says.

That’s not what happened. The city ended up adding an additional 20 bike racks between Williamsburg and Bushwick and the racks were never removed, she says. León was disappointed in the politics of the project, more than anything.

“I told them, ‘This is rushed, you’ve cut out a part of this process,'” she says.

Though León says she hasn’t received any complaints about the bike racks yet, she’s concerned that the city isn’t doing a good job of informing residents about the rules.

“It’s ultimately about how you share the streets,” she says. “Cyclists skirt the law and it really puts them at risk and I think that’s why the board takes a more stern stance against biking because people keep breaking the law and it can be really dangerous.”

But Cutrufo says Citi Bikes can be an equalizer. They allow residents who are tight on cash to travel where they need to go.

City Planning’s Bushwick neighborhood plan, linked to the rezoning, says that the neighborhood is set to get six more Citi Bike racks this year.

The end of car culture?

The Bushwick rezoning could bring up to 18,000 more people to the neighborhood. If that means more cars too, Bushwick is in big trouble, Wingfield says.

“That is something the city absolutely cannot handle,” she says.

But León envisions the opposite. The neighborhood already consists of 82 percent non-car commuters. With even more residents coming from other parts of the city, it will likely bring more pedestrians and cyclists.

The community board is starting to reflect this change, she says. Albeit, slowly.

“We have more of a mix than we did,” she says. “There are certainly a lot of drivers, but we have a lot of cyclists. One person drives a moped.”

And in many cases, Bushwick residents can do both. Eddie Gonzalez says he drives, but nothing compares to riding his bike with the Schwinn gang.

The Classic Riders might not be bike advocates, but Gonzalez sees the need for more help for cyclists. After all, bikes unite all kinds of folks in the neighborhood, he says.

“We have a lot of things in common, whether it’s music or stopping at a bodega and drinking a beer,” he says. “It’s like family. We get to know each other for so long.”