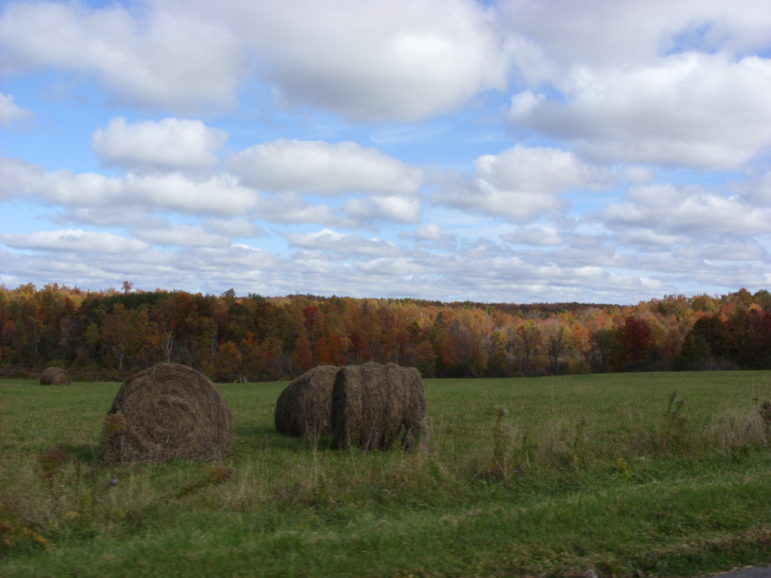 A farm in Cayuga County Researchers estimate that the food system is responsible for about a third of all greenhouse gas emissions globally.

Last month, New York City and State approved bold Green New Deal plans that will contribute to reducing greenhouse gases, making buildings and transportation more energy efficient, and creating economic and job opportunities. But by leaving food out of the plans, the city and state missed a chance to amplify and accelerate the transition to a more sustainable, healthier and equitable region.

Researchers estimate that the food system is responsible for about a third of all greenhouse gas emissions globally. Food workers, from fields to factories to fast food, are the largest employment sector in the United States – and the lowest paid. Our current food and agricultural systems, dominated and controlled by giant food multinationals, have left more than 2 million city and state residents food insecure. Between 2010 and 2016, the percentage of New York State adults who have diabetes increased from 6.3 percent to 10.5 percent and other diet-related diseases also increased.

How could bringing food onto the Green New Deal menu reverse these trends? In the last several decades, public policies such as subsidies for corn and soy; tax breaks for marketing unhealthy food to children; and limited enforcement of rules against misleading or deceptive food advertising to children have enabled food companies to make cheap, industrially produced foods ubiquitous. Of note, the agricultural, food production and marketing practices that contribute to diet-related diseases such as diabetes, heart disease, cancer and stroke are the same ones that increase pollution and greenhouse gas emissions from growing and transporting food.

A Green New Deal can limit the power of large, wasteful food corporations and invest in decentralized local and regional, low-carbon food systems. Just as we need to decentralize energy system in the United States to reduce reliance on large oil and gas corporations that have been heavily subsidized by the state, we need decentralized planning and production in our food system.

One way to do this is to rethink the way we use public money to subsidize an unequal, unhealthy, climate-disrupting food system. Each year, the United States currently spends about $63 billion on SNAP, the food stamp program; almost $14 billion on school lunches, and hundreds of millions more on public procurement by state and city agencies, from state funding for food pantries to meal programs in food served in senior centers, and child care programs. As Ribka Getachew, Director of NYC’s Good Food Purchasing Policy Campaign, an effort to convince New York City and State to join other cities in using its procurement dollars to improve our food system, points out, New York needs “accountability measures that make less room in the marketplace for massive agribusinesses and more room for the vendors that are aligned with values rooted in racial and gender equity, a commitment to supporting our workforce, sustainable practices, humane care of animals, nutritious and culturally rooted foods, and supporting our local and regional food economies.”

Imagine if every dollar New York City spends on preparing the 240 million meals and snacks it serves in public institutions each year were spent on healthy, sustainably grown food produced, cooked and served by decently paid workers. Public food dollars can also be used to make sure that stores that accept SNAP stock healthy, affordable products and that public institutions purchase more food grown and produced in New York State. Expanding the number of local food hubs, such as the one in development by the Bedford-Stuyvesant Restoration Corporation in Central Brooklyn, can help small agencies –and grocery stores—more easily purchase, and serve or sell healthy, affordable regionally grown products.

Requiring agencies to serve and retailers to stock more regionally and sustainably produced foods also requires the State to support small and medium sized farmers to increase regional, sustainable food production. We need economic incentives and structural support for sustainable farming – a transformation of subsidies and funding that now favor large scale industrial growers. As Liz Henderson from the Northeast Organic Farming Association of New York (NOFA-NY), an organization of farmers, gardeners, and aware eaters that works to create a sustainable regional food system, points out, “if New York State had fair contract legislation that supported farmers in getting prices that cover production costs, farmers would be less likely to overproduce, use excess fertilizer and toxic pest controls.” By modifying agricultural subsidies to make small and medium scale sustainable farming economically viable, the state could prepare more farmers to become true stewards of our agricultural resources.

Expanding regional production will also require the preservation of existing farm land and investments in a new generation of farmers. Alison Cohen of WhyHunger, a group that supports grassroots movements to end hunger, argues that, “the Green New Deal should focus on making land accessible to the estimated 350,000 landless farmers in the US.” Dennis Derryck, the President and Founder of Corbin Hill Food Project, which distributes local, farm fresh food to low income communities of color throughout New York City, observes that “the call to provide land to the landless farmer has to acknowledge the millions of acres of land lost by Black farmers.  How are they included in such solutions?”

By addressing the long-term displacement of farmers of color and the disproportionate burden that unhealthy food imposes on communities of color, the Green New Deal can more fully meet the needs of Black, Brown and immigrant New Yorkers. And by ensuring that all farm and food workers in New York are paid living wages, a Green New Deal could expand the number of Good Food Jobs, positions that offer decent pay and benefits and make healthy, sustainably grown food more available and affordable throughout the region.

Achieving the goals of the Green New Deal in New York will require broad based public support. A food-enhanced Green New Deal could expand that support by engaging all New Yorkers who want to leave their children a healthier and more sustainable future. By including food in the vision for a Green New Deal, we have an opportunity to make our city and state a better place to live, work, and eat. And that is something people are willing to fight for.

Maggie Dickinson, Nicholas Freudenberg and Rositsa Ilieva are affiliated with the CUNY Urban Food Policy Institute located at the CUNY Graduate School of Public Health and Health Policy. Earlier this summer, the CUNY Urban Food Policy Institute convened a group of academics, practitioners, and activists to imagine how a Green New Deal at the city, state and federal levels could help fix our broken food system. This commentary is based on that discussion.

One thought on “Opinion: Put Food on the Green New Deal Menu”