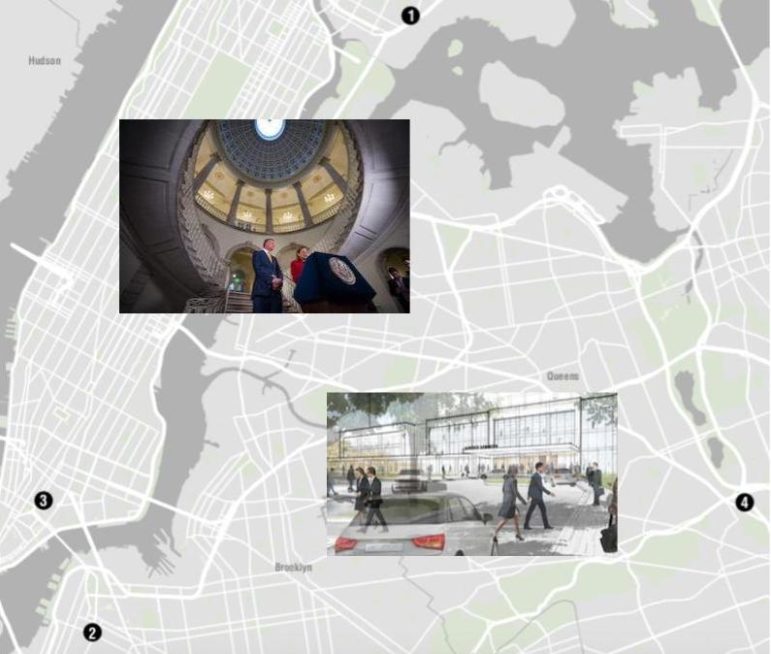 The four proposed jail sites, the moment Mayor de Blasio announced the plan to close Rikers and a rendering of what the new Queens jail might look like.

In the past 27 months the notion of closing Rikers has gone from an idea the mayor dismissed to one for which his administration stands on the verge of gaining formal approval.

As the daily population in city jails continues to shrink, Mayor de Blasio’s plan to create four new jails in the boroughs is nearing approval by the City Planning Commission. Consideration by the City Council comes next and, amid steady support from the four Councilmembers whose districts would host the new facilities, approval—perhaps of an amended version of the plan—seems likely.

That’s not to say the plan is universally accepted. On the contrary, it faces three schools of skepticism.

Conservatives and the correction officers’ union generally argue that Rikers can be reformed and that it’s foolish to spend billions to shut down a perfectly good penal colony. On the left are people who believe the problem with correction in the city is not Rikers per se but the policy of incarceration itself, and reject the notion that building new jails represents progress. Then there’s Gov. Cuomo, who continues to insist that the mayor’s 10-year timeline for mothballing Rikers is emblematic of progressives’ ineptitude in governing.

Tyler Nims, executive director of the Independent Commission on NYC Criminal Justice and Incarceration Reform (a.k.a. the Lippman Commission, which produced the comprehensive case for closing Rikers), joined WBAI’s Max & Murphy Show on Wednesday to discuss the borough jails plan and the critiques that have emerged.

Nims expressed sympathy for those who would prefer to see no one in a cage.

“I agree that there are too many people who are incarcerated today. I also agree that jails and prisons often make the problems worse and not better. I mean if you look at the criminal system in our city, our state, our country, you can only conclude we are doing things in many ways that are very harmful, and in a way that is different from the way that it’s done anywhere else in the world, whether you’re talking about Russia, or Rwanda, or Saudi Arabia, or Iran. Nobody incarcerates people at the rate that we do,” Nims said. “I wish we were at the point where I could say no jails are necessary, but I don’t think that we are. And at this particular moment, as we’re trying to close the Rikers jail, we’re trying to go from a point where you have a city that has 11 jails to a city that has four jails, and somebody who opposes the plan from that perspective that you described has to be able to explain why those of us who care about criminal justice reform will be in a better political position to change the justice system and to put an end to Rikers island if this current land use process fails. They haven’t articulated a pathway to actually closing Rikers.”

When it comes to the 10-year timeline, Nims said, “The plan that is in progress right now is the right plan, it’s one that is viable, it’s moving.” He added: “You know we all want this to be done as fast as it can be done, but it has got to be done right.”

Hear the interview below, or listen to the full show, which includes a discussion of the Department of Justice announcement that it would not prosecute Officer Daniel Pantaleo in the death of Eric Garner, as well as a conversation with outgoing Riders Alliance chief John Raskin on where the MTA’s reforms are headed.

With reporting by Cyan Hunte.