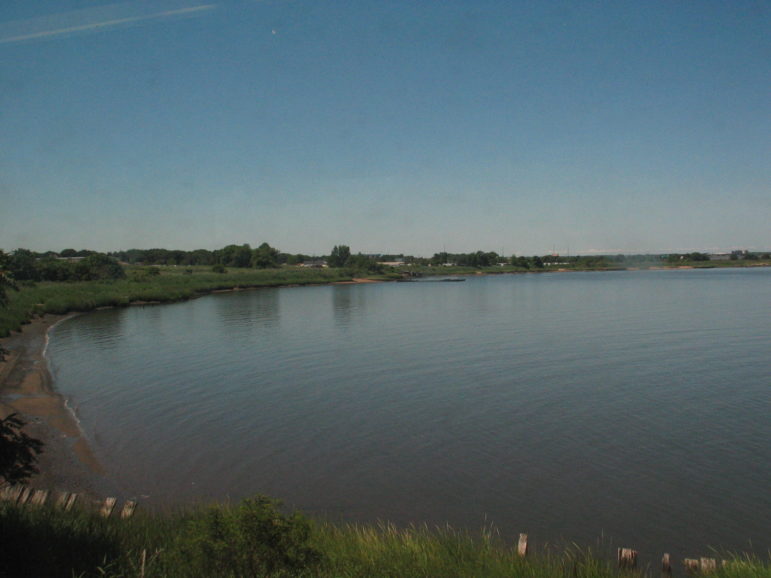 Raritan Bay, through which part of the proposed pipeline would run.

Three weeks after New York State rejected a bid to build a natural gas pipeline through its waters, the state of New Jersey did the same on Wednesday.

Like their counterparts in Albany, regulators in Trenton denied Williams Transco’s application for environmental permits for its Northeast Supply Enhancement Project “without prejudice,” leaving the door open for the company to apply again.

Williams and National Grid, the utility that has said it will buy all the gas provided by the new pipeline, vowed to do just that.

“Williams will evaluate and address the issues cited by the NJ DEC related to the application for water quality permits and will resubmit the application quickly,” said National Grid spokeswoman Wendy Ladd. “We remain cautiously optimistic that the project will proceed on schedule and be in service for Brooklyn, Queens and Long Island customers by the winter of 20/21.”

The project would involve the construction of a compressor station as well as several miles of pipeline on New Jersey land and in its territorial waters.

In a letter to Williams (see below), the Garden State’s Department of Environmental Protection determined that the project posed a threat to wetlands and that the company had “failed to demonstrate that no practicable alternatives exist” and had not convinced the DEP of a “compelling public need.” New Jersey also said the company hadn’t demonstrated how its planned dredging would not harm water quality.

Environmental groups that opposed the project hailed the DEP’s move.

“This victory affirms that dangerous gas pipelines have no place in our communities. Instead of locking in a fossil-fueled future that threatens our waters and endangers marine life, New Jersey is rightly driving forward a local clean energy economy,” said Kimberly Ong, a senior attorney at the Natural Resources Defense Council (NRDC), in a statement. “Rest assured – we will use every tool in the kit to stop this reckless project from ever being built.”

The Stop the Williams Pipeline Coalition said its focus would now shift back to the east side of the harbor. “We expect Williams to reapply in New Jersey as they have in New York, but the truth remains: there’s no safe way to build this fracked gas pipeline when it comes to our waters and climate,” the group said in a statement. “As the fight against the Williams Pipeline reignites here in New York, we will escalate our opposition and call on Governor Cuomo and the DEC to stop the pipeline for good.”

Williams, meanwhile, continued to argue that without the new gas supply the pipeline would provide, it will be unable to keep up with demand for gas in New York. “We continue to accept but not process applications for new and expanded firm natural gas service from residential, commercial and industrial customers until all permits are received and the project is allowed to proceed,” Ladd said.

Critics have questioned whether supplies are as tight as utilities have suggested. As City Limits reported last month, National Grid supplied less gas in 2017 than it predicted in filings with state regulators the year before, and recently lowered its estimates for usage in 2019 by 30 percent compared with what it predicted in 2016.

While regulators in New York and New Jersey have to evaluate the project through the narrow lens of state law, the more fundamental issue at play in the debate over the Williams pipeline is whether it is wise to create new fossil-fuel infrastructure given the widely acknowledged risk of climate change. Critics say the time for fossil-fuel projects has passed. But pipeline supporters contend that the pipeline would reduce the region’s carbon footprint by allowing more homeowners to convert from dirtier heating oil to natural gas.