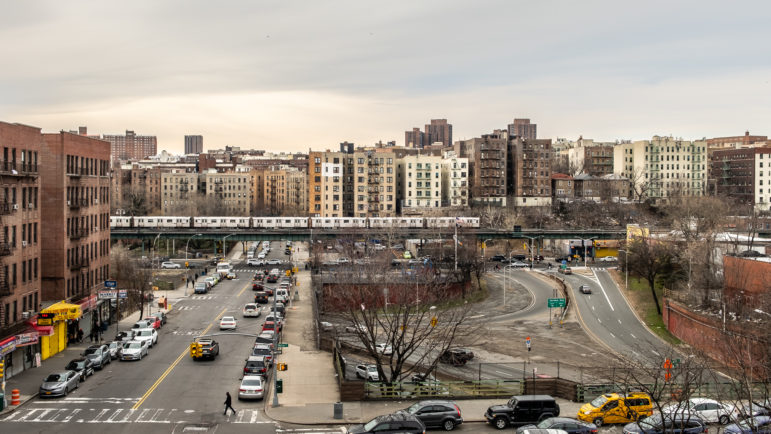 A view from the Grand Concourse of Jerome Avenue with its elevated 4 train, the Cross Bronx Expressway ramps and 174th Street.

An all-time high of 63,000 people slept in the city’s homeless shelters in January, according to a new report from the Coalition for the Homeless. Based on the current trajectory, that number is likely to increase by 5,000 individuals in the next three years, the authors write. The coalition says that the city must immediately build 24,000 new units of deeply subsidized, affordable housing and preserve at least another 6,000 existing in order to change this trajectory.

The city’s growing homeless rolls have been driven by a growing number of single homeless adults—a group that has grown by more than 10 percent per-year under Mayor de Blasio’s tenure, according to the report. It calls the mayor’s goal of reducing the homeless census by 2,500 between 2017 and 2022 “embarrassingly unambitious” and lays the blame for this crisis squarely at the feet of the mayor and governor.

Here are some other housing-related stories from this week:

The University Heights and Fordham neighborhoods face the greatest threats to affordable housing, a report released last week by the Association for Neighborhood Housing and Development says. The area was recently rezoned.

Another report by ANHD in partnership with the Housing Rights Initiative says that a mechanism that allows landlords to increase rents on stabilized apartments after conducting renovations is vulnerable to rampant fraud. The authors argue that the “individual apartment improvements” clause is designed to drive speculation and displacement.

The Department of Housing Preservation and Development has anew commissioner. Until last year, Louise Carroll had worked at HPD for 12 years, most recently overseeing the tax incentives program.

The New York Post reports that NYCHA cut down more than 200 trees at the Baruch Houses on the Lower East Side. Residents were upset. According to NYCHA, the deforestation is part of Hurricane Sandy recovery and repair efforts and the trees will be replaced.

The Center for Urban Pedagogy along with several partners has launched a campaign educating tenants about how to report landlord harassment. Download it here.

Have a story you think should be included in our weekly housing round-up? Email Harry DiPrinzio atharrison@citylimits.org.