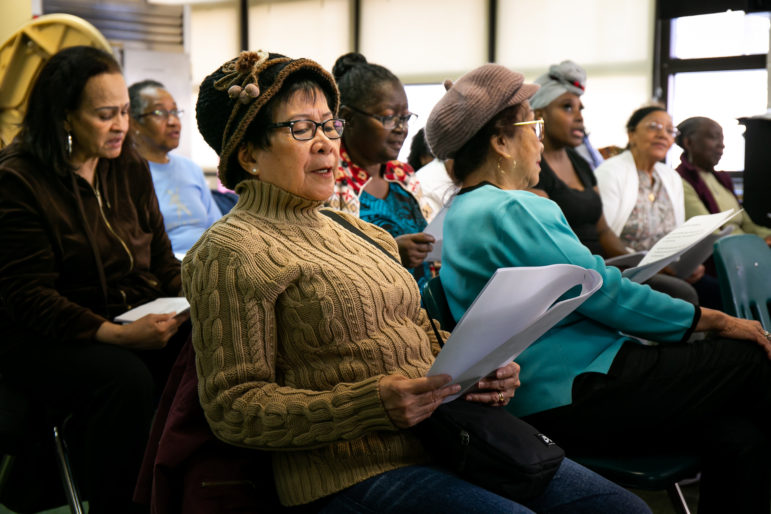 The United States, like most other industrialized nations, is grappling with an aging population. New York State and City are part of that trend. Residents over the age of 65 now make up a significant part of the population in the state. While more than half of that older population is White, a lot of recent growth has been among seniors of color, especially because of the presence of Latin American and Asian immigrants.

And, as at other times of life, color matters. Census data indicates that while only 7 percent of Whites over age 65 live in poverty, 19 percent of Latinos, 17 percent of Blacks and 13 percent of Asians do. While those senior-poverty rates are all lower than those for the overall population, the fact that such stark differences exist despite the impact of Social Security hints at challenges the city will face as it grows grayer.

The prevalence in senior poverty is especially concerning as New York’s housing prices continue to rise. From 2010 to 2018 rents in the city went up a little over 30 percent. The median rent as of 2018 was around $3,000, difficult for any working person, much less a senior living in poverty, to afford.

Though New York City is over 40 percent white, the city’s older population is the most diverse it’s ever been. And though all seniors could use help getting resources, seniors of color, particularly Latinos, face steeper challenges.

A 2015 report by the Urban Institute showed that by the age of 61, White Americans have on average made over $2 million dollars, while Black and Latino Americans have made about $1 million. Regardless of whether or not they have access to a pension plan, older people of color have less to save. People of color, regardless of their education level, are often underpaid compared with their white counterparts, which exacerbates the poverty they may face later on in life.

Housing threats are about more than housing

Displacement from a community that someone may have lived in for a long time can cause unnecessary stress that will hurt a senior resident’s health. It may also cut them off from informal help from neighbors who speak their language and who pool resources.

A 2017 “Aging With Dignity” report from Comptroller Scott Stringer’s office outlined that while 50 percent of New York’s overall population was rent burdened (meaning that they use more than 30 percent of their income to pay for rent) a little under 60 percent of older residents were rent burdened. Older residents of color are more likely to be affected by this since they are less likely to be part of families that own homes.

Income inequality, along with the legacy of redlining, contribute to the current levels of lower rates of homeownership for some seniors. Without a home where rent isn’t going to increase drastically, many seniors, particularly those of color, lack a buffer against the current housing crisis and are more likely at risk of being displaced. They also lack a key financial resource in the form of home equity.

Christian Gonzalez-Rivera, a senior researcher at the Center for an Urban Future, says that racist policies in the past continue to affect people into older age. Immigrant families are some of the most affected since foreign born seniors make less than native born seniors.

“Immigrant families in the city on average earn less than U.S.-born families,” he says. “When you combine that with the fact that the growth in the older adult population is [led by] immigrants, you very clearly start to see a picture of immigrants being burdened the most with caretaking duties.” Immigrants are more likely to take up unpaid work as aides to their aging family members because their families cannot afford outside care. That can create not just personal stress and crowded housing conditions, but also lost wages from paid work that has to be given up.

He believes that a lot of conversation regarding race and society focuses around the younger population, since that section of New York is more diverse, and because young people are facing racial issues in education and in employment. But if economic issues for seniors of color aren’t addressed, it will affect the generations after them since there’ll be less wealth to pass down and younger relatives will end up taking care of the seniors with little to no help, affecting their own careers and earnings.

“People who earn less end up recouping less in Social Security, unfortunately this is something that perpetuates,” says Gonzalez-Rivera.

He thinks the city should allocate some sort of income for family caretakers – who are overwhelmingly of color – to recoup financial losses for taking off work or having to avoid taking on more responsibilities at their jobs. Without that extra income, the cycle of burnout and relying on underpaying jobs will continue until that caretaking family member is themselves an older adult who didn’t have the opportunity to save enough for their older years.

Ben Thomases, the executive director of Queens Community House which is a network that serves seniors in Central Queens, says that he sees a lot of the issues first-hand. He says that some of the disparities affecting seniors of color have a lot to do with language, culture, and outreach to underserved immigrant populations.

He also says that without extensive outreach that aims to fill in the gaps for elderly recipients, especially those who are immigrants and have a cultural and language barrier, problems facing older New Yorkers will only increase.

“Years ago I worked in the mayor’s office and I was part of a team of people who applied for a grant … to create an outreach program to immigrant seniors: SNAP outreach to immigrant seniors,” says Thomases. “It was very successful, [but] when the federal funding ended, the outreach effort ended.”

He wants the city to take a look at other programs like that and to “pick up the mantle” and continue to fund extensive outreach programs. Even as the 65+ population has swelled, resources such as affordable housing, food and social programs, and medical services for that portion of the population have decreased by 40 percent per older resident since 2000, according to the a recent report in City Limits.

There are a number of city agencies and local organizations that provide services to older New Yorkers. Some seniors are eligible for assistance from Section 8 housing, SNAP and more. But as the city’s housing crisis continues to grow, and as rents rise for people on fixed incomes, it’s almost impossible to keep up with the demand.

The Comptroller’s 2017 report described how “over 200,000 seniors wait an average of seven years for an apartment in the Department of Housing and Urban Development’s (HUD) Section 202 Supportive Housing for the Elderly program.” It also outlined how the New York City Housing Authority (NYCHA)’s “backlog for HUD’s Section 8 Housing Choice Voucher program is so long that new applications have not been accepted since December 2009.”

Gonzalez-Rivera thinks that the city should put more of its yearly budget towards addressing the ever growing needs of older adults and the families that care for them.

“All of the responsibility for taking care of older New Yorkers can’t just fall on the Department for the Aging. At the end of the day, DFTA is one of the smallest departments in the city,” he says.

Less than one percent of New York City’s budget goes towards that department. Gonzalez-Rivera doesn’t think that’s enough to reach the growing senior population. He also says that the unique needs of immigrant and seniors of color can’t be fully addressed by one agency.

Sometimes the issue is not agency responsibility but program design. “There are some really good housing benefits, like the SCRIE (Senior Citizen Rent Increase Exemption) program but there are lots of seniors whose income is too high for them to benefit from the SCRIE program,” Thomases says. The program works within rent regulated apartments, within the last decade more units have been destabilized than rent stabilized, adding to the housing crisis making rent assistance like SCRIE less likely to reach enough low-income seniors.

Beyond policy details are political priorities and cultural attitudes, and advocates say that’s where the deepest change is need. Thomases says older New Yorkers need to be treated just as much a part of the city as the younger population. Committing to them, particularly the more vulnerable seniors, is a commitment to the overall wellbeing of New York City. “Older New Yorkers, regardless of health complications remain vibrant dynamic people,” he says. “We need full respect for them, and their vibrancy.”