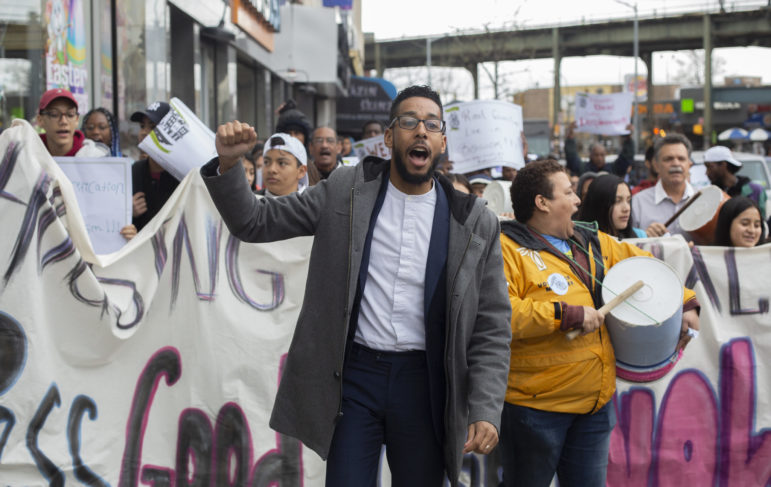 Councilmember Antonio Reynoso, seen here on a recent march for affordable housing, and colleague Rafael Espinal launched the Bushwick community planning process. Now they wait to see how much of that vision is reflected in the city’s plan.

Bushwick residents, elected officials and other stakeholders say they expect the city’s neighborhood rezoning plan—due out Tuesday—to differ from a community-generated vision released last year on the issues of density, the preservation of industrial space and affordability levels for housing.

The steering committee behind the Bushwick community plan, which includes dozens of residents, small business owners, activists, property owners and community groups, met with city agencies to create its plan. The steering committee was in part organized by Councilmembers Antonio Reynoso and Rafael Espinal, both of whom have said in past interviews that their roles was to moderate rather than direct the effort.

The Department of City Planning would not share details of the city’s plan ahead of sharing it with the community board but did say community input, including from the steering committee appointed by local Council members, is reflected throughout.

The steering committee’s vision, known as the Bushwick community plan, included recommendations on land use zoning changes and  improvements to parks, infrastructure and transportation services. In the plan’s introduction, the community says Bushwick residents have been facing rising rents and a changing landscape and the plan’s purpose is to be proactive rather than reactive to it.

Some members of the steering committee expect the city planning agency may reject their recommendations on density and protecting manufacturing land. Brooklyn Community Board 4 District Manager Celestine Leon says those two were contentious issues between Department for City Planning and the steering committee during the planning process. The community plan recommended higher-density zoning on publicly owned sites and on transit corridors but not in mid-blocks to maintain the contextual character (the details of the plan can be read here).

Leon expects density to be the primary sticking point. “The community’s plan is fair but I think the city may have a different idea of what that means, because density affects myriad of issues such as infrastructure, character of the neighborhood, affordability.  Frankly speaking, if the density is increased we can see a lot of changes coming to the neighborhood very quickly,” Leon says. The community plan’s insistence that no manufacturing land be lost to residential development is another place where disagreement is likely. The city may propose rezoning some manufacturing land to permit residential development. “And we don’t know if that is going to be something we can accept. Those are jobs for our community so their loss can be significant.”

Reynoso agrees those are likely to be the sticking points.

The community plan encourages density with affordable housing along the transit corridors such as Myrtle and Wyckoff Avenues or main streets and also encourages the preservation of residential mid-blocks. “So the community is not against development of a new buildings in certain areas. But only if they can get a lot more affordable housing,” Reynoso says.

Reynoso says the changes in his community have come so quickly that he has had to take drastic measures such as not approving spot-rezoning applications in the district. Spot-rezoning is when a developers or property owners of a specific parcel of land or parcels of land want to change its zoning designation from the surrounding area.

“I think the plan is going to reflect the amount of work done by the community over the last four years. I think this [city] plan could have looked a lot different if the community had not done the hard work already,” he says. “Even though it won’t be exactly what we want it will be something that respects the fact that we have working in this for four years. I think it won’t be the final version of what we want but it will be a good starting point considering where we could have been—had we not advocated the way we have over the last four years.”

Brooklyn Community Board 4 voted in approval of the community plan in February. But community groups such as Mi Casa No Es Su Casa, G-REBLS and The Brooklyn Anti-Gentrification Network (BAN) have protested against any type of plan, whether is it a city or community initiated plan. In February, Mi Casa No Es Su Casa and G-REBLS released a letter voicing their opposition to the community and city plan, “We believe this Bushwick Community plan is illegitimate because the active body of the DCP steering committee is made up of mostly nonprofit professionals and elected officials who have invested interest in seeing Bushwick rezoned, regardless of the terms. The few individuals community residents on the steering committee have less of a vote than electeds and non-profits…”

Reynoso says community activists groups are welcomed and have met his office frequently. “They push the envelope and I am a big proponent of making sure that you get your voice heard. We brought them into the conversation and they still are against it, but we regularly meet with them.”

According to the Brooklyn Community Board 4 office, the Department of City Planning will be presenting their neighborhood plan on Tuesday, April 23, 2019 starting at 6:00 p.m. at 1420 Bushwick Avenue, the main office for the Board.