Max & Murphy: Would a Comprehensive Plan Map a Better Future for NYC? 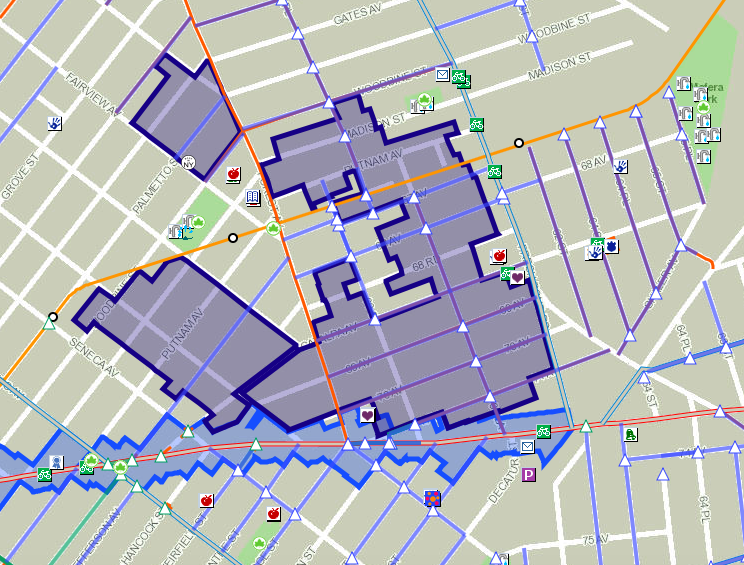 A snapshot of the city’s NYC GIS tool indicates some of the resources and issues that a comprehensive plan might address: city facilities, open space, transit, sewage and more.

Change comes regular as sunrise to New York City, but that doesn’t mean it always comes easily. Whether it’s a homeless-housing provider looking to lease space for a shelter, a developer hoping to build tall or a mayor aiming to rezone dozens if city blocks, proposals to alter the physical city often trigger passionate argument, raucous protest and the odd lawsuit.

Over the next few months, the city could see a different kind of debate – not over what to build on a parcel or how to rezone a few blocks, but about the way the city decides such issues. The 2019 charter revision commission is considering adopting “comprehensive planning” for New York City. That would shift the city from a land-use system that primarily responds to development pressure and produces very localized zoning changes with varying degrees of connection to housing subsidies and other city investments to one where changes in every neighborhood align with an array of policies and a set of citywide goals.

New York City has never had a comprehensive plan, and many are resistant to the idea that there’s any need for one. After all, the city’s population and workforce are booming. And a comprehensive plan would take significant time and effort to produce in a city that is constantly evolving. For that reason and others, skeptics of comprehensive planning begin their argument with,”If it ain’t broke …”

But a group of advocates, experts and non-profit housing developers called the Thriving Communities Coalition has stepped forward to argue that the status quo is not sustainable. One of its members is the Pratt Center for Community Development, and its director of policy, Elena Conte, told the WBAI Max & Murphy Show on Wednesday that the city’s current “planning” system does little planning at all.

“Right now we’re both failing to meet the needs of existing residents and we’re failing to plan holistically for the growth that is anticipated, the climate change that is already happening. It’s as though the right hand doesn’t know what the left hand is doing when it comes to planning and policy. And the folks who are bearing the biggest brunt of that is communities of color because of the long legacy of unmet needs and racist planning decisions that have left them with baseline conditions that are so inappropriate for a baseline standard of living,” Conte said.

“But really it’s a problem that affects all of us, because we have major challenges as a city ahead of us and we need to be tackling them together and recognizing we are one city as if we aim at a set of goals we can each those goals together,” she continued. Without that, “We’re never going to rise to the occasion.”

Conte said the current system fails on both planning and democratic grounds in places like East New York, the first neighborhood that Mayor de Blasio rezoned:

Some cast the debate over comprehensive planning as an argument over whether the city should grow or not. But that’s not what it’s about. Right now, the city has asked some neighborhoods to shoulder the burden of absorbing density more heavily than others. And it has offered a transaction in which underserved communities get investments they arguably should have received anyway in exchange for accepting new residential development and all the impact that entails.

Conte also said comprehensive planning would look at more than population growth. “It’s climate change and resilience, housing needs and jobs. It’s the state of our aging infrastructure. Schools segregation and spatial inequality, It’s all of these big pieces where we get to look at across the board what’s happening,” she said. “It’s an opportunity to integrate questions of housing affordability with homelessness with public housing, which right now are separate silos in terms of how they’re dealt with bureaucratically. But we understand obviously how all of those are related.”

What comprehensive planning doesn’t do, she said, is give neighborhoods a veto over being part of the growing city. “The comprehensive planning framework creates the opportunity and the responsibility for people to participate in the creation of citywide goals and then in the distribution of how we meet those goals,” she said. A community doesn’t get to say “no,” full stop. “What I do get to do is say, ‘Here’s where it will work best in this community and here’s how we can work to integrate and support it.'” That includes more affluent communities, who will have to accept housing that brings in lower-income people.

Conte rejected the idea that comprehensive planning would be too time consuming. “Right now a tremendous effort is being put out in running completely separate so-called participatory processes and then wondering why nobody comes out,” she said. Asked if comprehensive planning would, as some have suggested, reduced the power of the mayor to set a course for the city, Conte paused, then answered:

“In some ways it would in the sense that communities would get stronger and clearer voices. But I think in other ways, it would actually strengthen the ability for us all to go in one direction, which is supposed to be what the power of the executive provides.”

Hear our conversation with Conte below. Or listen to the full show, which includes a chat with Bronx Borough President Ruben Diaz, Jr., about borough jails, affordable housing and the 2021 mayoral race.