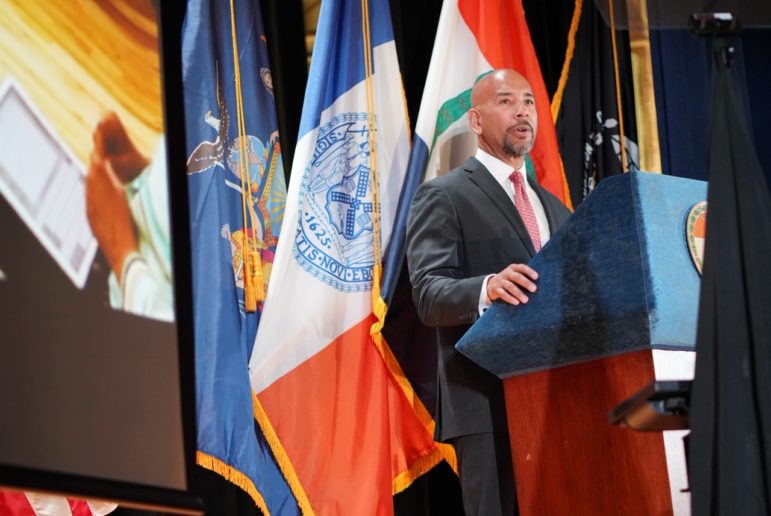 Office of the Bronx Borough President

In an interview Wednesday on the WBAI Max & Murphy Show, the beep also talked about whether borough presidents need more power, indicated the solution to specialized high school segregation is more seats and talked about the vision for the city he’ll put forward as the 2021 mayoral campaign heats up.

The City Planning Commission on Monday certified the city’s plan for four new jails, starting the Uniform Land-Use Review Procedure in which community boards and borough presidents offer advisory opinions before the Commission and the City Council take binding votes on decisions about zoning changes, alterations to the city map and deals involving city property.

The new jails, which would be built between 2021 an 2027, would together provide 5,750 beds. Their construction would permit the city to close Rikers island, whose physical location and outdated facilities are blamed for fostering violence, exacerbating delays in case processing and deepening the damage of incarceration. A blue-ribbon commission in 2017 recommended new, smaller jails in each borough to keep people in city jails—the detainees who are awaiting trial and the inmates who are serving sentences—closer to courthouses and family.

The mayor has not proposed a jail for Staten Island. In Manhattan, Queens and Brooklyn, new high-rise jails would sit adjacent to criminal courthouses. In the Bronx, however, the chosen site at what is currently an NYPD tow pound on 141st Street in Mott Haven is about a two-mile drive from the criminal courthouse on 161st Street.

Diaz—who insists “I am in favor of closing down Rikers Island. I want to be unequivocal about that”—has opposed using that site, arguing that the location is better suited for other development ideas that neighbors would welcome. He’s also said that the proposed Bronx location undermines one rationale for the borough jails by being some distance from the courthouse (although it would still be closer than Rikers or the jail barge that has long been berthed along the Bronx shoreline).

The Bronx beep has proposed an alternate site—the current location of the Family Court building on 161st Street. De Blasio administration officials say that site is too small. Diaz disputes that conclusion.

“What data do they have? They haven’t even examined it. If they’re referring to maybe the building by itself is too small, what we’re saying is you should take the family courthouse, which is being underutilized. You can de-map that street between the building and the courthouse. This is property the state owns. And maybe they don’t want to get into it with the governor because the mayor and the governor don’t get along. They’ve chosen the path of least resistance, which is the tow pound, because [the city] owns that property, so again they’re choosing political expediency. But again, if you took the family courthouse, the street and the state’s own property, you can build up and have the necessary beds.”

Diaz also said, “By the way, I’ve already spoken to the state and the state is willing to give the property to them. Let me just say this before we move on: It is critical for something we’re going be dealing with for generations to come is for us to get it right.”

Patrick Gallahue, a spokesperson for the Mayor’s Office of Criminal Justice, tells City Limits that, even with the extra territory Diaz mentions, the site on 161st would require a more intrusive building.

“We considered the Courthouse site and adjacent sites including the use of state owned properties and consideration of de-mapping streets.  The square footage was still significantly smaller than the Tow Pound location,” Gallahue says. “In all four boroughs, we have worked to reduce the height of the proposed facilities, but it is inevitable that a smaller footprint would produce a taller jail facility.”

The proposed Bronx site has always been the shortest of the proposed jails, and now stands at 245 feet after the administration reduced the height of all four sites. The Manhattan site is a full 205 feet taller.

The beep also criticized the city’s decision to hold one ULURP process for all four sites; the administration says it’s taking that unusual step because the four jails are inextricably linked. Should one site not materialize, the rationale for the others would evaporate.

Right now in the ULURP process, a borough president like Diaz only has an advisory opinion. Asked if he thought the charter revision commission should consider changing that. Diaz indicated he was working on recommendations to change ULURP, but offered few details.

With two of the city’s nine specialized high schools located in the Bronx, Diaz has long spoken about the need to improve the representation of Black and Latino students in the city’s elite schools. With the mayor taking flak for his plan to replace the Specialized High School Admission Test with a different system, Diaz faulted City Hall’s rollout. Diaz said he favored a mix of admissions measures (“We need to look at other metrics besides examinations to see if we can have more of a representation of the student body in our specialized high schools.”), said the city needs to increase the size of its gifted & talented program to prepare more students for the SHSAT, and argued that the pool of specialized seats needs to get bigger:

And the other thing we should not be doing is putting one community against the other. And this is where I disagree with the mayor and his rollout. It became offensive to the Asian community. And we know the majority of the Asian community don’t come from affluent families, It’s cultural for them to focus on academics and they’re trying to live the American dream and that should be celebrated. What we need is to increase the amount of seats. Only the first three [SHSAT schools] are codified by state law. The other five were created and we just need to create more if we have to.”

Asked about the city’s efforts to make good on promises made during the Jerome Avenue rezoning, which occurred a year ago, Diaz said, “The jury’s still out.”

It’s been a year since we did the [rezoning] and we had so many things like increasing the number of school seats. I know the [Department of Education] has been working with [Councilmembers Fernando] Cabrera and Vanessa Gibson on identifying locations so we can increase the number of school seats here. [We need] to make sure when all is said and done that the police precincts will have numbers that will match the increase in population. We’re working with the MTA to make sure the transportation and bus services will be adequate for the increase in population. This is ongoing process but we’re focused to make sure the city comes up with its end of the bargain

Hear our conversation with Diaz below. It ends with him talking about the vision for the city he will put forward in 2021.

Or listen to the full show, which includes an interview with Pratt Center’s Elena Conte about the possible adoption of comprehensive planning.