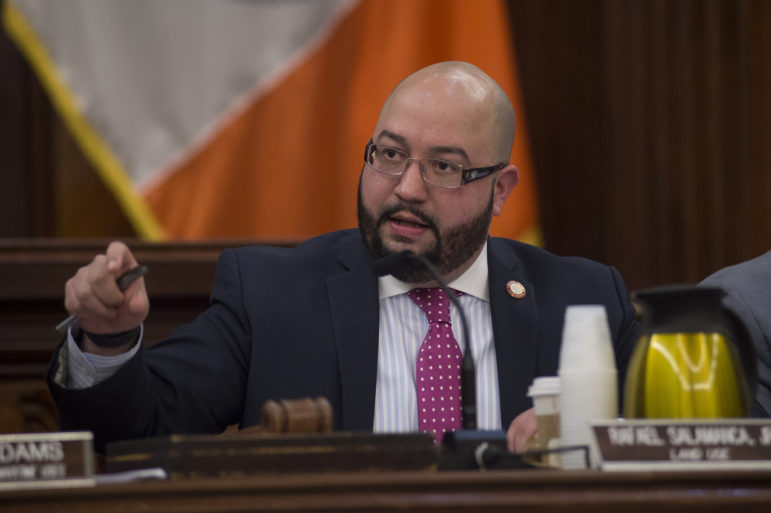 Land Use Committee Chairman Rafael Salamanca represents the area being studied for a possible rezoning.

The Department of City Planning this week begins the next phase of its community engagement process in the Bronx’s Southern Boulevard study area—a neighborhood targeted for a possible rezoning.

For almost two years, the DCP has been engaging residents, community-based organizations and elected officials to understand housing, parks and open space, traffic, transportation, education, job and training opportunities along with other aspects of the Bronx neighborhood.

The Southern Boulevard Neighborhood Study is one of several neighborhood rezoning efforts launched as part of city’s affordable housing program, which aims to use increased residential density to create and/or preserve affordable housing. So far, five neighborhoods, East New York, Downtown Far Rockaway, East Harlem, Jerome Avenue and Inwood, have resulted in rezonings (for more details of which neighborhoods could get rezoned this year, read this year’s rezoning round up here).

Councilman Rafael Salamanca, who represents the area covered by the Southern Boulevard study (and chairs the Council’s Land Use committee), says his biggest concern has been the possible displacement of residents and small businesses because of development triggered by the likely rezoning. He wants to know how the city will use its current policies and programs to combat those issues.

“How would the [city] avoid gentrification?,” he asks. He has also asked City Planning for an inventory of empty city-owned and privately owned lots in the area as well as a list of capital needs such as schools and parks in his district. He says that information will help him and his constituents understand what development and affordable housing opportunities exist for their neighborhood while the study is underway.

“I was very clear, this is what you need to show to our community,” says Salamanca, who has not received his request yet from DCP.

Another concern for Salamanca is the income levels in the city’s Mandatory Inclusionary Housing (MIH) program for affordable housing, which will apply to the rezoned area. “MIH is not enough, especially for a community like mine, which is a transit-rich community looking at gentrification,” he said. In neighborhoods the city has rezoned, the incomes targeted by MIH—while still modest—exclude the households that most need help.

Last year in November, Salamanca introduced legislation that would require developers who receive city financial assistance for housing development projects to set aside no less than 15 percent of created or preserved dwelling units for homeless individuals and families. Although some city housing subsidy programs include homeless set-asides, some developers who benefit from MIH are not required to participate in those programs.

From Crotona Park East to Longwood

DCP said information from residents, stakeholders and elected officials is the main purpose of their engagement and they welcome those opportunities, “The value of a neighborhood planning process is to enable a full range of stakeholders, and certainly community leaders and elected officials, to identify what they view as pressing needs. After all, they are the on-the-ground experts. We take all of this into account as we plan for a neighborhood and assess priorities. There will be many more conversations and public discussions as we go forward,” in an email statement to City Limits.

The study area encompasses the Crotona Park East and Longwood neighborhoods and covers Southern Boulevard between the Cross Bronx Expressway and East 163rd Street including the Bronx River and Crotona Park. According to the Department of City Planning (DCP), the study covers more than 130 blocks and hosts 60,000 residents and 17,000 existing residential units. Most of the residential buildings are one- or two-family homes, multi-family walk-ups and multi-family elevator buildings.

In the 1960s, the area deteriorated after the city, under planner Robert Moses, demolished thousands of tenements to construct the Cross Bronx and the Sheridan Expressways. Between 1970 and 1980, it was also one of the communities worst hit by the Bronx arson crisis when 15,000 housing units were lost to fire in Crotona Park East.

The plan to study the Southern Boulevard area for a rezoning emerged after New York State decided to convert the Sheridan Expressway from an underused expressway into a pedestrian-friendly boulevard after decades of advocacy from local groups. The construction of the future boulevard is underway and will cost an estimated $75 million.

Last year, DCP revealed results from a community survey which showed that the primary concern in the area, from 973 individual comments since November 2016, expressed by 23 percent of respondents, was streets and transportation. Fourteen percent said it was retail and business; 13 percent, housing; 12 percent, parks and open space; 10 percent, community and diversity; 8 percent each for security and for health, and 7 percent for youth programs, according to the survey.

The new schedule for DCP workshops

City planning workshops encourage community participation from any person who is a resident within the study area and/or from an organization vested in the community, along with business persons and elected officials.

Sessions in 2018 in the Southern Boulevard area were well attended. In January, DCP held a small workshop for business owners in the area but a few showed up because of the cold weather. Francis D’Souza, a resident and retired math teacher, said in an email that it was hard to get people to participate in the cold weather, “At presentations, very few people show up. For the small business presentation, I personally went to several places and gave them a flyer. None showed up. But now that gardening season has begun… [maybe we will see more people].”

The engagement workshops schedule begins on Thursday, March 14 starting at 6:00 p.m. at the East Bronx Academy 1716 Southern Blvd. This workshop will cover discussions around the improvements of parks, open space and the waterfront from safer streets to public access of open space.

Next month, DCP has scheduled a workshop on housing on Thursday, April 11 at 6:00 pm at the East Bronx Academy 1716 Southern Blvd. The workshop will cover how to preserve existing affordable housing, resources for tenants and property owners and the creation of new affordable housing in the area.

Two other workshops are scheduled for May (to discuss access to healthy food) and June (to discuss “violence as a public health issue”) but details on location and time have not been determined.

For details, follow City Limits Zone-In calendar here which is updated with housing and land-use related events from across the city on a weekly basis.

The next step after the community engagement process would be for the city to prepare a draft environmental impact statement before the plan is certified by the City Planning Commission. The certification starts the Uniform Land Use Review Procedure (you can read about the ULURP process in detail here).