What Does the City’s Eviction Data Really Mean? 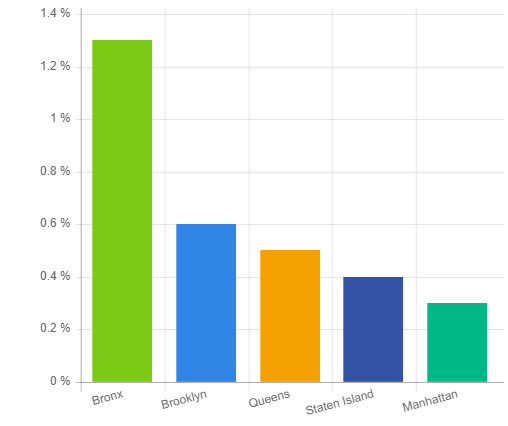 Data from the Council's report.

The western part of the Bronx is the epicenter of evictions in the city, according to data released Monday by the City Council speaker’s office.

The data, covering from January 2017 into 2019, detailed nearly 40,000 evictions that took place across the five boroughs.

The data broke evictions down by borough, council district, state legislative and congressional districts, and zip codes. It overlaid eviction information with data on code violations filed with the Department of Buildings and Housing Preservation and Development. The map also indicated buildings that have been on the city’s speculation watch list, which identifies recently sold rent-regulated buildings where potentially predatory investment may put tenants at risk.

Acting Public Advocate and New York City Council Speaker Corey Johnson said the data sheds light on a critical housing issue, adding that he hoped the informational map would help policymakers and advocates in the fight for tenant rights and protections, “We are facing an affordability crisis and the only way we will be able to fix it is to truly understand the scope of the problem and provide tenants with tools and resources to stay in their homes,” he said.

In 2018, out of over 230,000 eviction petitions filed, only 9 percent (20,804 evictions) were executed by the City Marshall. Johnson said this was due in part to the Universal Access Law — which passed in 2017 by the City Council and is slated to be fully implemented by 2022. The law requires the city’s Office of Civil Justice Coordinator to establish programs for access to legal services for tenants facing evictions. In its’ first year of implementation, the law provided free legal services to more than 87,000 New Yorker, according to the data.

“There has been a steady reduction in eviction numbers since the funding in legal services. We believe it is an effective anti-eviction strategy,” said Jenny Laurel, executive director for Housing Court Answers. “This is really just the beginning.”

Laurel said the funding for law, also called the “right to counsel” law, has given tenants who are being legally evicted from them homes to fight the eviction in housing court. The Universal Access Law matches tenants in housing court with pro-bono attorneys from non-profit legal service organizations. The tenant is interviewed to make sure they are eligible for the program. She added tenants should go to evictionfreenyc.org to find out if they qualify for legal services in their neighborhood.

Johnson said the eviction locations, with the overlays of the state Senate and Assembly districts, will aid tenants and organizers advocating for rent reform this legislative session in Albany.

“I think it’s a very useful visualization of how the various new anti-harassment laws that were enacted over the past couple of years overlay with each other and relate specifically to eviction rates,” says Emily Goldstein, director of organizing and advocacy for Association for Neighborhood Housing Development. “As the website text highlights, it’s certainly the case that it’s become an unfortunately common practice for landlords to bring frivolous eviction cases in housing court as a means of intimidating and harassing tenants. It’s clear that Right to Counsel is already having an impact there. Over the coming years, it will be interesting to see whether it also begins to have a deterrent effect – that is, whether landlords will stop bringing frivolous cases once they realize that it is no longer an effective mechanism to harass tenants out of their homes. But I wouldn’t expect that to show up in the data until further down the line.”

But landlords and landlord advocacy groups such as Rent Stabilization Association (RSA) say the numbers show evictions have leveled off. They add that the city’s policies for tenants do not address legitimate landlord needs. and argue the data does not answer all the questions.

“We as a landlord organization were expected as to oppose [the Universal Access Law] but we never did. What we said then and what we say now is, having an attorney on both sides is important,” says Mitch Posilkin, general counsel for RSA. “The first year, there was a 18 percent decline in eviction. The following year it went from 25,000 to 20,000 and now we are at a plateau. The important question here, is why are we at a plateau now?”

Posilkin says more detailed data was missing, such as the type of evictions in play. A bigger issue, he said, is that city policy is focusing on court cases rather than creating rent subsidy or public assistance programs to help tenants so they do not have to go to court in the first place. He added that existing programs such as the city’s “one-shot deal,” an emergency rent assistance program which helps people who cannot meet an expense due to an unexpected situation or event, is a temporary fix for tenants who are not able .

“Maybe there needs to be a better mechanism to shepherd people into public assistance. I don’t pretend to know the answer. But I do know this, the number of people that are homeless in this city continues to go up. I know the amount money the city spends on one shot and [Family Eviction Prevention] programs continue to go up. All of these indicators are going up. But the eviction rate after its initial drop had plateaued,” says Posilkin. “The goal should be making housing court a last resort not the first resort.”

New York City landlord Alan Shamah echoes RSA’s concerns about a lack of details in the data. “There [are] very important statics that [are] missing, that must be included; how many of the started cases end up getting closed out the moment the tenant shows up for court the first time? Further, what kinds of eviction cases are they? Non pay? No access to do a repair?,” he tells City Limits. “Without this information, what is it can we deduce?”

Shamah believes the city’s recent focus on landlord harassment has overlooked the roots of the housing problem: “To date all I see is both sides talking at each other and all we end up with is more laws to disenfranchise private equity and more laws that really at the end of the day do not help tenants. This [public advocate data] seems to add to this theme.”

Tenant advocates, while hailing the universal-access law as vitally important, recognize that there is a bigger picture.

“Right to Counsel is super important. On a much deeper level, the disconnect between wages and rents has been growing for decades and until that shifts this won’t get any better. Those on fixed incomes are the most vulnerable, who won’t be helped by the minimum wage increase, so Senior Citizen Rent Increase and the Disabled Rent Increase exemption programs are also very important,” says Gregory Jost, director of organizing for Banana Kelly Community Improvement Association.

But the larger dynamics don’t change the fact that evictions can have a devastating effect on families and communities.

“The numbers are so high in the Bronx, as we have a growing concentration of people/families who have already been displaced from their neighborhoods in Brooklyn/Manhattan/Queens,” Jost says. “Add to this the impact of evictions and displacement on people who are already living in financial scarcity, and there are ripple effects on all other kinds of life outcomes from health to education.”

2 thoughts on “What Does the City’s Eviction Data Really Mean?”