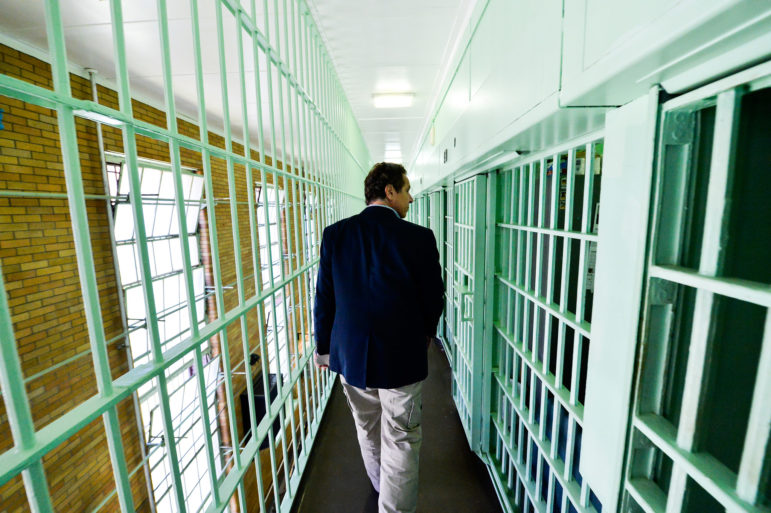 Advocates seeking to improve the state’s system for releasing people who have served long sentences descended on the state capitol Tuesday in an effort to get parole reform added to the long list of criminal-justice changes—like ending cash bail, strengthening speedy trial requirements and revising discovery rules—the New York legislature will soon take up.

The advocates are calling for a new mechanism to parole prisoners older than 55 who have served at least 15 years of their sentences, including older people who were sentenced to life in prison without parole.

They also want to shift to a system of “presumptive” parole that would make it less likely for parole applications to be denied.

And they are demanding that Governor Cuomo appoint a full slate of parole commissioners—there currently are 12 but there could be up to 19—and fund more staffing for the Parole Board so it can process parole applications more quickly.

If successful, the advocates’ efforts would make 12,000 people eligible for presumptive release. That’s about half the people in state prison who will eventually be go before the Parole Board. Among those 12,000 are more than 2,200 people serving life sentences.

Under the elder parole measure, just under 1,200 prisoners would qualify for an immediate Parole Board hearing, including 310 people serving a term of life without parole—or a sentence so long it amounts to the same thing.

Proponents of reform say their prospects rest on growing awareness of how the parole system works and doesn’t, and the power of the Parole Board to not only affect individual lives but also shape state policy around punishment, rehabilitation and re-entry. Tanya Krupat, director of policy at the Osborne Association, says the hope is that New Yorkers will start to ask, “Who are these gatekeepers of freedom?”

Over the last decade, New York State prisons have been slowly shrinking, releasing more people than they take in and admitting far fewer people than in years past—6,200 fewer were admitted in 2016 than in 2007. Thanks to that steady deflation, the state prison population shrunk over that decade by nearly one fifth to around 51,000.

That’s still a lot of people. It’s more than the national prison populations of Iraq, Uzbekistan, Australia, Chile and dozens of other countries with far larger populations than the Empire State.

One reason for New York’s still high number of prisoners is that, as in other U.S. states, laws require and courts impose far longer sentences than other countries do for the same type of crime.

Increasingly, the people left in New York’s prisons are serving those types of long sentences: Even as New York’s prison population has shrunk over the last decade, the average minimum sentence rose from 106 months to 124 months. Fully a quarter of the state’s prisoners are serving minimum terms of 15 years or more. A third could serve maximum terms of 15 years or more, including 9,000 inmates facing possible life in prison if they aren’t paroled first. Some 280 other inmates are serving a life term without the possibility of parole.

Partly because of changes in sentencing that mean more inmates get “determinate” sentences with a firm release date and no chance at parole, the number of people released on parole in New York State is shrinking. The number of releases to parole supervision decreased by 19 percent from 2007 to 2016. In 2014-2015, the last year for which data has been published, only one in four initial appearances at the Parole Board resulted in a release. The release rate was a far higher 51 percent in 2005.

Those long sentences mean people could be locked up decades after they committed their crimes, regardless of whether they have changed. It means huge costs to the state, especially as the prison population ages and more inmates get sick and die behind bars.

In an era where a broad spectrum of political players are rethinking law and order, however, parole has received less attention than policies like stop-and-frisk, the Rockefeller drug laws, or bail.

Background from the City Limits archives:2018: Call for State to Address Crisis of Aging in Prisons

2013: Prisons Get Grayer, But Efforts to Release the Dying Lag

It’s not hard to guess why. Unlike detainees held at Rikers Island on low bail, people serving long sentences in state prison are not awaiting trial: They have already pled or been found guilty. And no one doing a 15-to-life stretch in Dannemora is there for jumping a subway turnstile or smoking a joint on their stoop. Most people in state prison stand convicted of violent crimes like murder, rape, robbery and arson.

What’s more, parole can be dicey territory for politicians, because headlines about parole rarely make pols look good: When Herman Bell, who murdered two police officers in 1971, was released on parole last April, it became a campaign cudgel against Cuomo.

Still, advocates for parole reform have found allies in the now-Democratically-controlled State Senate.

The elder parole bill (S.2144) is sponsored by Sen. Brad Hoylman, a Manhattan Democrat, and Sen. Gustavo Rivera of the Bronx authored the presumptive parole bill (S.497). Senators Robert Jackson of Manhattan, Velmanette Montgomery of Brooklyn, Jessica Ramos of Queens, and Luis Sepúlveda and José Serrano of the Bronx have signed on as co-sponsors of both measures.

Both bills were introduced in the last session but went nowhere in the GOP-controlled Senate. There’s no Assembly version so far in 2019, but David Weprin of Queens authored versions of each bill in the lower house last year.

The sponsors seem aware of the issue’s political risks; in fact, they argue that the politics around parole are part of the reason it needs reform. Saying current law “makes the board susceptible to political pressure to deny parole to inmates with high profile crimes even if they are thoroughly rehabilitated with excellent prison records,” the legislative memo attached to Rivera’s bill argues: “The Board’s failure to grant parole to low-risk inmates results in expensive, prolonged, unnecessary incarceration of middle aged and older inmates who have a very low probability of recidivism and who are very expensive to incarcerate because of high medical costs.”

It’s unclear how the governor will treat the issue. Last May, Cuomo said “the aging prison population continues to grow at an alarming rate” and noted that “Providing the proper healthcare for these individuals, including frequent transportation to outside clinics and maintaining specialized units within correctional facilities, is increasingly complicated and costly.” He introduced a new “geriatric parole” provision for inmates over the age of 55 “who have served at least half of their sentences and whose debilitating or incapacitating medical conditions make it difficult for them to care for themselves within a correctional facility.” Advocates say the mechanism was too restrictive and cumbersome to be of much use.

The governor did not request any new staffing for the Parole Board in this year’s budget, and did not address the parole system in his annual speech or briefing book.

The elder parole bill creates a new release mechanism based on age rather than court-imposed sentences. It would require that anyone who is at least 55 years old and has served at least 15 years under any kind of sentence get a Parole Board hearing. “If the board determines that there is a reasonable probability that, if such person is released, he or she will live and remain at liberty without violating the law and that his or her release is not incompatible with the welfare of society,” the legislation reads, “then the board shall release the person to community supervision even if the person has not served the minimum sentence imposed by the judge.”

The presumptive parole bill, on the other hand, changes the way parole decisions are framed.

Right now, state law says parole can be granted if “there is a reasonable probability that, if such inmate is released, he will live and remain at liberty without violating the law, and that his release is not incompatible with the welfare of society and will not so deprecate the seriousness of his crime as to undermine respect for law.”

The new language would require parole to be granted if “there is a reasonable probability that, if such inmate is released, he or she will live and remain at liberty without violating the law, and that his or her release does not present an unreasonable current public safety risk.”

And if the inmate doesn’t get parole at the first hearing, “there shall be a presumption of release at any subsequent board appearance absent a preponderance of evidence that the inmate is unlikely to live without violating the law and that his or her release presents an unreasonable current public safety risk.”

Some of the people serving lie sentences without the possibility of parole might have been targeted for the death penalty a generation ago. At that time, LWOP was considered a humane alternative to being executed, and the severity of that sanction shored up the political case against capital punishment.

“I think we know a lot more now than we did then. We know about brain formation and development. We know about aging and transformation. And we know more about what victims and families want,” pointing to recent research indicating that many crime victims prefer alternatives to lengthy incarceration for the people who hurt them.

Krupat acknowledges that parole has yet to achieve the kind of broad reform consensus that has coalesced around other facets of the criminal justice system. But she says awareness of the system is spreading, in concentric circles, from those who have been affected to those in a position to effect change. When people learn that inmates are navigating prison corridors in wheelchairs, that some of them have great-grandchildren, “People are being brought on board,” the push for reform, Krupat says. “‘Wait a minute,’ they say. ‘What is happening here?'”

The decreasing use of parole in New York State

The data below comes from the state Department of Corrections and Community Supervision. Board releases are those made by the Parole Board. Presumptive releases occur when DOCCS decides inmates should be released from prison after having served at least five-sixths of their minimum sentences. Conditional releases are automatic, unless an inmate has been punished by a loss of “good time,” and happen when inmates have reached their conditional release dates (typically six-sevenths of a determinate sentence and two-thirds of an indeterminate sentence). The Other Release category includes transfers from other states, judicially imposed parole, getting paroled out of a local jail, juvenile offenders and some sex-offender cases.