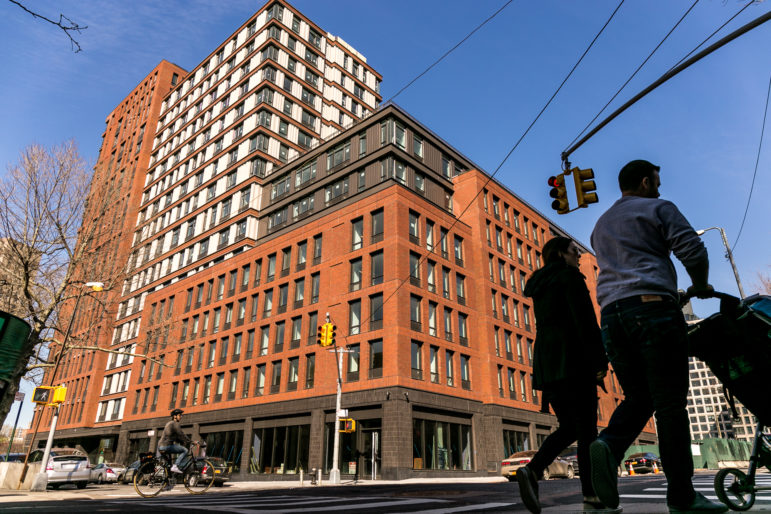 535 Carlton devotes 50 percent of its apartments to upper-middle-income households, with rents set at 160 percent of Area Median Income, for households earning up to 165 percent of AMI, or $149,490 for a family of four.

The recent court-ordered release of 4,251 pages of emails [PDF] between the administration of New York City Mayor Bill de Blasio and his favorite outside consultants—which de Blasio futilely called “agents of the city,” advisers deserving confidentiality akin to inter-agency communications—reveals far more than the mayor’s frustration with press coverage.

The emails (below), pried loose after a lawsuit by NY1 and the New York Post, also show how media events are staged, and why consultant BerlinRosen—both unpaid advisor and a paid consultant to de Blasio’s Campaign for One New York nonprofit, which operated 2013-16—might be prized by real estate developers aiming to stay on good terms with de Blasio.

As NY1 Political Director Bob Hardt wrote, “And what consultant wouldn’t want to boast to clients that the mayor is including him in on so many decisions that he has to plead to be taken off an emails chain?”

Though the Mayor’s Office claimed, as cited in the court decision, that the “withheld documents relate to communications in which Mr. [Jonathan] Rosen was not acting on behalf of any clients nor interests they represent,” but rather offered advice “represent[ing] solely the interests of the Mayoralty and the City,” clearly there were overlaps.

Consider the calculations behind the June 12, 2017 official opening for the 535 Carlton tower in Prospect Heights, the first “100 percent affordable” building in the Pacific Park (formerly Atlantic Yards) project.

Unmentioned: the grateful tenant was hardly representative of a building with 148 of 297 units aimed at middle-income households paying, for example, $2,680 for a one-bedroom apartment or $3,223 for a two-bedroom unit.

As this reporter wrote for City Limits in April 2017, the “real math” behind that building’s housing lottery showed some 67,000 households aiming for the 90 low-income apartments, while only 2,203 made the first cut for the 148 middle-income units. Ismene Speliotis, former ACORN housing head and now Executive Director of MHANY Management, which manages the housing lottery and tenant intake for the project expressed concern, telling City Limits that the limited response for the middle-income units indicated “a disconnect between the population’s need and the apartment distribution.”

On June 9, a Soffin deputy emailed Norvell a draft press release, asking City Hall to inform them when a quote from Deputy Mayor Alicia Glen “has been drafted.”

The press release was headlined:

The press release began with quotes from real estate executives—Greenland’s Hu Gang and Forest City’s MaryAnne Gilmartin—then slotted in space for a validating quote from Glen.

Cotton, the main public face of the joint venture Greenland Forest City Partners, shared remarks the developer had drafted for resident Crystal Patterson. “It would be impossible to overstate the gratitude I have for our new home; it has truly changed my family’s life,” the draft stated. “And as a 4th generation Brooklynite, I am so thankful to have permanent roots in the city where I was born and raised.”

The statement, apparently prepared after a discussion with Patterson, summarized her struggles after losing her job, finding short-term rentals at various locations and applying for more than 60 housing lotteries. When she won a two-bedroom at 535 Carlton, “The joy we felt was indescribable,” being able to have a united family, with her son, who’d stayed in Brooklyn to be close to his school.

Cotton sent Patterson the media event’s plan: “There are lots of details in there but the main point is you will speak last in the program and be introduced by my boss MaryAnne (who you will love)…. We put together a few points for you below. Please let us know if they work for you!”

Norvell was impressed. “Could we have Crystal [Patterson] start the speaking program and intro Alicia [Glen]?” he suggested to Soffin, copying Cotton. “That’d be powerful!” That’s not how it worked out, but plans for a ribbon cutting, speeches and tours impressed Norvell.

“Super. All good w this,” he pronounced.

Norvell did, however, rethink the press release: “We want to issue this from City Hall, given [the] Mayor’s longstanding support of the project.” His revision was headlined:

De Blasio Administration Cuts Ribbon On 300 Affordable Apartments At Pacific Park Brooklyn
First 100 percent affordable building at Pacific Park will serve families earning as little as $25,000 up to those in the middle class

By mentioning a lower income boundary but not an upper one, the subheading could leave the impression that incomes tilted down. By the final press release, the latter statement was honed further, citing an even lower income floor, for individuals:
First 100 percent affordable building serves New Yorkers earning as little as $20,100, and up to moderate and middle income earners

“The people who built this borough have just as much right to the ‘New Brooklyn’ as any newcomer,” de Blasio was quoted in the draft.

Perhaps because of the ambiguity regarding community preference—after all, a short-term resident within the four nearby Brooklyn Community Districts would also get preference for half the units—the final press release would offer a more ambiguous de Blasio quote: “Our administration is delivering on the affordable housing this community was promised. For hundreds of families right here in Brooklyn, these homes represent economic security… and the assurance that they’ll be able to afford to stay in the borough they love.”

The release did mention one upper income bound—$149,000 for a family of three, not $173,415 for a family of six—but not the building’s skewing toward middle-income households.

Norvell, when sending the draft, said he’d let the developer and a mayoral aide gather quotes from elected officials, such as Borough President Eric Adams, and asked Forest City to insert a quote from Patterson.

“no word from crystal yet so make up a quote about making a home at 535 with her son and it will be fine,” Cotton responded.

Later, she delivered an excerpt from the previously drafted remarks: “Thank you to everyone who helped me make the dream of having a place of our own a reality and for prioritizing affordable housing at Pacific Park Brooklyn.” That statement, however heartfelt, served both Greenland Forest City and BerlinRosen’s other, informal client: the mayor’s office.

“I hadn’t asked,” Cotton responded. Norvell asked her to reach out.

Cotton’s reticence perhaps reflected some new dynamics regarding the mayor’s affordable housing efforts, with some former allies no longer close.

Lewis, as leader of New York ACORN, had in 2005 negotiated the project’s affordable housing pledge, with 20 percent of the affordable units at the highest income “band.” As head of The Black Institute, Lewis had hailed 535 Carlton at its December 2014 groundbreaking, though 50 percent of its units were in the highest “band,” for households earning up to 165 percent of Area Median Income (AMI).

Westin, leader of ACORN successor New York Communities for Change (NYCC), had in 2014 praised 535 Carlton as offering “real affordability.” But the Real Affordability for All coalition, which includes NYCC, began making distinctions between below-market and “truly affordable” housing.

Cotton did forward a supportive quote from Speliotis: “535 Carlton is an example of public-private partnerships working together to provide beautiful and affordable housing for an array of individuals and families at a wide range of income levels.”

The event and the aftermath

Indeed, it drew much positive press coverage, such as from Curbed, Bklyner, and amNY. No mainstream media outlet pointed out that Patterson, as a low-income tenant, was not necessarily representative of the building.

Three months later, reality set in: Greenland Forest City opened up numerous middle-income units at 535 Carlton—as well as a previous building with affordable housing, 461 Dean—to anyone who fit the income categories, outside of the housing lottery.

In early November, Rachel Holliday Smith wrote in City Limits that nearly 100 middle-income apartments were now listed on StreetEasy. “It has been a harder band to fill,” acknowledged Speliotis.

By January 2018, Greenland Forest City began offering a free month to middle-income households willing to rent at 535 Carlton, the kind of incentive common with market-rate units. A year after move-ins began, as of April 26, 2018, the building was 76 percent full.

Even some seemingly good news—the rents for eleven units at 535 Carlton were cut—comes with an asterisk. The lowered rents allowed a condo building down the block, 550 Vanderbilt, to gain a significant tax break, joining the rental building in a single “zoning lot,” as this reporter wrote in City Limits last October. None of these facts have made it into a mayoral press release.