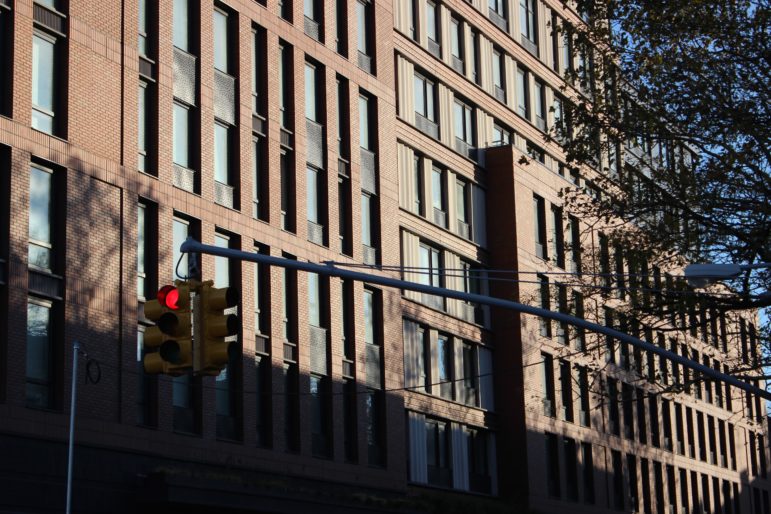 Approximately 95 units remain vacant in the 18-story affordable
building 535 Carlton Ave., which opened in the Pacific Park complex in July.

Nearly 100 apartments that were up for grabs at Pacific Park through the city’s affordable housing lottery a year ago are now being listed on StreetEasy, because not enough of the lottery winners would take them.

It’s been over a year since the housing lottery took place for the 18-story tower at 535 Carlton Ave., which officially opened in July within the Prospect Heights mega-development formerly known as Atlantic Yards.

Within eight weeks, about 93,000 people applied for 300 units in the building, according to the nonprofit that ran the lottery there.

But despite the deluge of potential residents, the building’s developers, Greenland Forest City Partners (GFCP), are still looking for tenants as of last week, according to advertisements on StreetEasy — a real-estate site — for subsidized studios, one- and two-bedrooms that cost $2,137, $2,680 and $3,223 per month. News of the postings was first reported by the Atlantic Yards/Pacific Park Report.

When asked what caused the vacancies, Ismene Speliotis — executive director of Mutual Housing Association of New York (MHANY), which has run the housing lottery at 535 Carlton Ave. and two other Pacific Park buildings — said all of the empty units are reserved for a specific group of people: those earning the most money.

At 535 Carlton Ave., apartments are awarded within a range of tenants’ incomes, starting with families making 30 percent of the area median income, or between $20,126 and $42,040, depending on household size, according to the building’s lottery restrictions.

But the most expensive apartments — which include all of the roughly 95 current vacancies, according to HPD — are reserved for households that earn between 135 and 165 percent of the area median income, which works out to between $74,606 and $173,415 per year, depending on family size.

The Carlton Avenue building was the first to open in Pacific Park as part of an agreement between the state and GFCP to build a total of 2,250 affordable units in the complex by 2025. It was lauded by Mayor Bill de Blasio at a 2014 groundbreaking as a development that “offers the chance to have a huge number of affordable units that people from this community can live in and continue to be Brooklynites.”

Pacific Park’s high income requirements are not unique to the complex; the affordable units in the new City Point building in downtown Brooklyn, the Essex Crossing project in Manhattan and a 26-story residential building in Jamaica, Queens also have income ranges up to 165 percent of the area median income.

But the earnings bracket is somewhat rare in the world of affordable housing. Speliotis said her 31-year-old group has never run a housing lottery with income requirements as high as those at 535 Carlton Ave. She said that 165-percent-of-the-median income bracket is “something that we should be looking at, as a city.”

“I think we should be looking at that income band and understand it, because we don’t want units to go vacant during a housing crisis,” she said.

“It has been a harder band to fill,” Speliotis told DNAinfo.

“We actually went through all of the lottery applicants in the highest income bands and were not able to identify enough interested people for those units,” she said.

Having exhausted the lottery option to secure tenants, the nonprofit and the developers got the go-ahead from the city last month to do “open marketing” for the units, Speliotis said, which led to the StreetEasy ads.

Forest City New York spokeswoman Ashley Cotton said the developer is “working hard to educate the community about this opportunity” and has seen “tremendous interest” since open marketing began earlier this fall.

“Unfortunately, many middle-income families desperate for good, affordable housing are unaware that they are eligible for these rent-stabilized residences,” she said.

Speliotis attributes the vacancies to multiple causes, but cited more well-off tenants’ choice in the private market as a reason the highest tier of apartments are a tough sell.

In addition, she said rental prices at affordable complexes are set at roughly 30 percent of the income of tenants, which is a godsend for low-income people who had previously been paying 40, 50 or even 60 percent of their income toward housing, a situation MHANY sees routinely. For higher-income people, however, 30 percent may be a larger percentage than what they were paying in the open market.

For Prospect Heights resident Mark Popham, the private rental he shares with his wife and now one-year-old daughter ultimately made more economic sense than one of Pacific Park’s subsidized apartments.

The visual-effects artist applied to 535 Carlton Ave. last summer — one of several affordable housing applications the couple made over the course of a year as they prepared for their first child — and got a lottery acceptance letter from Pacific Park in October, 18 days after his daughter’s birth.

“When I got the email, I screamed,” he said.

Initially, he assumed he and his wife jump at the offer. But the couple fell into the building’s second-highest income tier, making them eligible for either a two-bedroom that cost $2,611 a month or a three-bedroom for $3,009 per month — hundreds more than the cost of their current three-bedroom they’ve lived in for seven years.

When they realized it was more affordable to stay where they were, they turned down the offer from Pacific Park.

“It was a dream situation that was six inches away from working,” he said. “It was dispiriting.”

This story was due to run on DNAinfo on Thursday, November 2. It was posted just as the site’s owner shut it down.