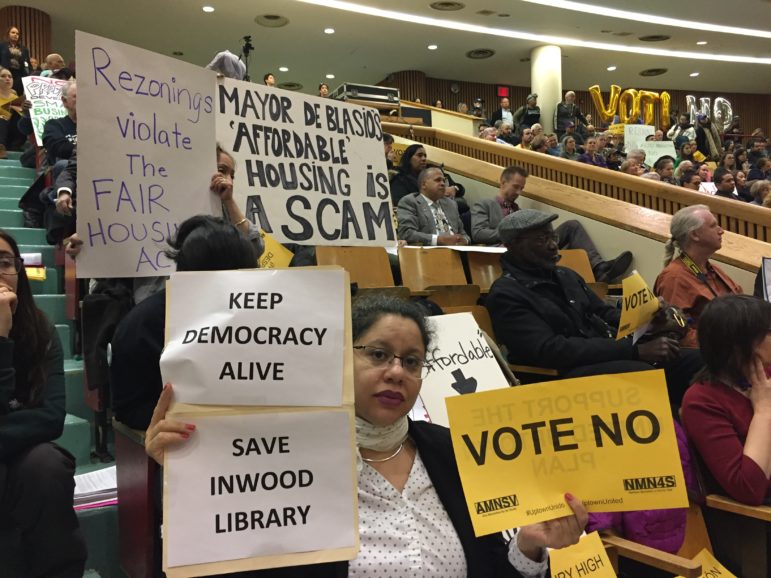 On Tuesday night, residents packed the auditorium of IS. 218 for Manhattan Borough President Gale Brewer’s hearing on the de Blasio administration’s proposed Inwood rezoning, with most testifiers speaking passionately against the proposal. Watch a video of the hearing here.

The Inwood rezoning is the fifth rezoning sponsored by the de Blasio administration to move through the multi-stage public review process known as ULURP through which a rezoning is approved or disproved. On March 20, the local community board voted against the proposal and enumerated an array of specific recommendations. The borough president will be issuing her own recommendation on April 25, after which the City Planning Commission, and finally the City Council, will make the ultimate and binding decisions.

There was an energy in the crowded auditorium both fiery and confident, buoyant and creative.  Each person who came up to the mic to speak in opposition rode a wave of cheering and applause back to their seat. Someone with a set of markers was pumping out alluring posters. One activist brought bulk quantities of chocolate banana bread, soup and lentils to share as testifiers grew hungry. And then, lining the back of the auditorium, there were the balloons: six gigantic letters, in gold and silver, spelling out “VOTE NO.”

“I love the balloons,” Brewer said. “First time I’ve ever seen balloons at a hearing.”

Brewer made her concerns about the rezoning clear upfront. (To invite people to the hearing, her office had been distributing a brochure including a labelled map of the rezoning, and with the header, “No rezoning in Inwood = gentrification, Bad rezoning in Inwood = gentrification.”) In her opening comments she stated that she had two main questions: whether the plan would make the housing crisis better or worse, and how would it affect small businesses.  She noted the prevalence of preferential rents in the neighborhood, which could make rent-stabilized tenants more vulnerable to displacement, the potential for much of the new housing to be market-rate, the fact that the rezoning would reduce job-generating industrial space, and how 147 businesses along the “Commercial U”—the commercial strips on Dyckman, Waterman and West 207—are located on low-rise soft sites that are likely to be redeveloped in the event of a rezoning.

Prior to the public testimony, she convened two pre-assembled panels, one on housing affordability and one on small businesses. It was an unusual structure—one that gave residents far more than their usual two minutes at the mic—and on each panel, three out of the four speakers spoke with passion against the rezoning (the remaining two were city representatives).

“Despite all the talk about public investment in the Inwood plan, we have heard nothing about the condition for buildings in the Dyckman Houses development,” said Cheryl Pahaham, a member of the Uptown United coalition, referring to the need for investment in the neighborhood’s public housing complex. She also called for investments in community land trusts as a method of creating new affordable housing.

Meanwhile, Sagiv Galai with Manhattan Legal Services asked the perennial question, “Why does a thriving, vibrant community like Inwood need to accept a rezoning in order to merit investment by the city?”

Representatives for the Department of Housing Preservation and Development (HPD) and the Economic Development Corporation (EDC) emphasized the number of resources that would accompany the city’s plan to protect tenants from displacement, including the Tenant Protection Unit that conducts door-to-door outreach, planned investments in 100 percent affordable housing at the site of the current Inwood library and on a waterfront property owned by Maddd equities, and a new program providing legal assistance to small business owners. They said a rezoning would help transform the neighborhood’s vacant lots and parking lots into opportunities to meet the community’s needs and create waterfront access, but also that that they were taking all feedback seriously.

“We understand the challenges that you are going through. It’s not falling on deaf ears…Action is needed to shape that change in a way that benefits Inwood residents,” said EDC’s Charlie Samboy.

Councilmember Ydanis Rodriguez, who invited the rezoning study and will have the ultimate say on its approval, was greeted with loud boos.

“You can boo me but at the end of the day, the only thing that we can do is to listen to each other,” he said, adding that he agreed with the sentiment on Brewer’s brochure—that a bad rezoning will result in gentrification, but that “If we don’t do anything, we will keep adding the number of residents, close now to 10,000, that are being priced out of Brooklyn, West Side, and other areas…”

Later, asked by City Limits if he supported Congressman Adriano Espaillat’s proposal to make the city subsidize the creation of 5,000 lots in the neighborhood, Rodriguez said he’d estimated the city so far had plans to subsidize about 1600 affordable units but would continue pushing for a greater commitment of subsidy. He said he’d also push for the creation of at least 100,000 commercial square feet of space affordable to small businesses.

The night was long (four hours) and, as usual with such events, slightly hectic. The Spanish translation equipment failed, just as it did at the community board vote, provoking the audience’s outrage. Brewer’s team then tried to translate each testimony delivered in Spanish. Other elected officials who don’t get a vote on the rezoning—Comptroller Scott Stringer, State Assemblywoman Carmen De La Rosa, Senator Marisol Alcantara—also declared their great concerns or opposition to the rezoning.

Many residents said they believed the Inwood rezoning would exacerbate the displacement of Black and Latino residents and small businesses, and others predicted overtaxed infrastructure and school overcrowding. Several speakers recommended that Brewer support the Uptown United Platform, an alternative community plan.

There were some new ideas thrown out. Resident Nayma Silver asked for a moratorium on rezonings for five or six years to analyze how rezonings have impacted other communities (beyond one MIT thesis,
the research is limited). Ava Farkas, director of Metropolitan Council on Housing said that when it comes to these promises of subsidized housing on the Madd Equities site and others, “The time to get enforceable commitments from the city and developers is now.”

And there were a few outliers: A local property owner who, over the crowd’s booing, stated that the rezoning would be an “incredibly efficient way to create permanently affordable housing” because market-rate housing could cross-subsidize the affordable units, and that “displacement happened in Park Slope and Astoria without a rezoning.” A woman spoke to the way the “rezoning is an opportunity” to create affordable housing that will keep Inwood’s expanding families together.

Rodriguez and Brewer stayed until the end of the hearing. If Brewer’s work on the East Harlem rezoning last summer is any precedent, it’s likely that she’ll continue to position herself as a critic of the current proposal and push for the Council to make changes. In the case of the East Harlem rezoning, Brewer ultimately expressed support for the final plan, though there were many residents who remained opposed or skeptical.

What remains unclear is just what kind of changes Brewer will push for in Inwood: Will she demand the city scrap its proposal to upzone the “Commercial U?” Will she reduce the amount of space that is rezoned for residential development east of 10th Avenue? And then there’s the bigger unknown: to what the Council and the administration will agree.

The Northern Manhattan Is Not For Sale coalition will host their monthly meeting on Tuesday, April 24, at 7 pm. At 1815 Riverside Drive, the Church of Latter Day Saints. On April 25, the Borough President will announce her final decision on the rezoning. Comments on the rezoning (in written form as well as two-minute videos) can be sent to inwood@manhattanbp.nyc.gov