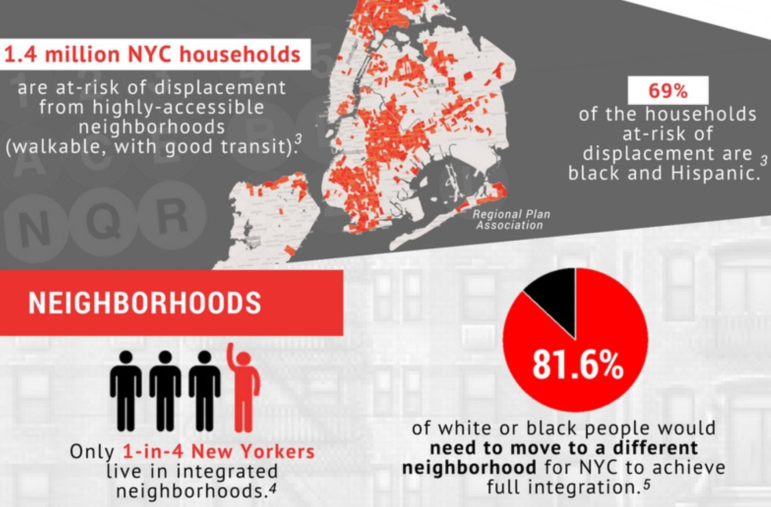 An infographic from Desegregating NYC

A new City Council report released Tuesday presents segregation as one of the city’s most significant problems and lays out a 12-point policy agenda to tackle segregation as it relates to housing, schools, and infrastructure.

The report, Desegregating NYC: Twelve Steps Toward a More Inclusive City, was co-authored by Councilmember Brad Lander and Policy and Budget Director Annie Levers in partnership with 10 other councilmembers. Its release comes a few weeks after the de Blasio administration announced that it would launch a process to assess the city’s compliance with the Fair Housing Act as required by an Obama-era rule, despite the Trump administration’s efforts to delay that process.

The report is, however, critical of De Blasio for not making integration “a strong feature of his work to combat inequality and make NYC ‘the fairest big city in America.'”

It notes that while other cities have become more integrated since 1980, New York City’s integration levels have remained stagnant, with only 1 in 4 New Yorkers considered to live in integrated neighborhoods. Schools are even more segregated than neighborhoods, and school segregation has also worsened over time, with the number of schools that are intensely segregated increasing by 70 percent between 1989 and 2010, according to the report. A 2014 study found that New York State had the most segregated schools in the country.

The report says segregation is harmful because it perpetuates inequality, but is careful not to simply endorse gentrification as an antidote.

“There are real reasons that people of color are skeptical of traditional conversations about integration,” it says. “There’s no inherent benefit to living or learning around white people … There are very real concerns about racial animus and displacement. Our goal cannot be moving a few black kids into a white school, or displacing low- and moderate-income families through gentrification.”

It further cites a Regional Plan Association study that showed 1.4 million New York City households are at risk of displacement from highly accessible neighborhoods, of which 69 percent are Black and Latino households. Given New York City’s displacement crisis, the report goes on to say, the federal government’s policies for fighting segregation—like pushing back against community preference policies  and instituting Fair Market Rents—are not appropriate for the city, and new tools are needed.  (Both federal policies aim to encourage low-income families to move to more affluent neighborhoods, but have problematic consequences for low-income families trying to avoid displacement from their neighborhoods.)

The report goes on to make 12 policy recommendations. To desegregate neighborhoods, it recommends that the Council build upon the administration’s recent decisions to launch a fair-housing assessment process by passing a law legally mandating an annual assessment of fair housing, as well as a bill requiring the city to review affordable housing projects to make sure they further fair-housing goals. It further calls for more investments in a program that fights housing discrimination. The “most important public policy step” to ensure low-income residents are not displaced as neighborhoods become more affluent will be strengthening rent regulations in Albany, it argues.

The report also calls for neighborhood upzonings in “high opportunity neighborhoods,” noting that all the approved neighborhood rezonings so far have been in low-income communities. The report says that an exception to this trend is the city’s current rezoning study of Gowanus, in Lander’s district, but it notes that rezoning will only be effective if it also ensures nearby public-housing developments are preserved and better connected to the neighborhood.

The report also calls for a variety of new policies to address segregation in schools. At the city’s specialized high schools, it recommends reserving half the seats for top achievers from every middle school. Other strategies include reforming school assignment policies on the high school, middle school and elementary school levels to factor in integration goals, and ensuring school district rezonings always achieve greater levels of integration. And it says that real integration will require more than just a diverse body, but changes to school culture including “culturally responsive education, equitable access to resources, restorative justice and a diverse teaching staff.”

On the topic of infrastructure, it argues that “race and neighborhood continue to be driving factors, rather than fairness and distributional equity” when the siting of city facilities, and calls for a package of reforms related to “fair share” proposed by the City Council last year. It also calls for major investments in the city’s bus system in order to ensure that low-income people who have been displaced to remote areas are able to access economic opportunities.

Last but not least, it calls for the establishment of an “Office of Integration” as well as the creation of a “public dashboard” with maps and infographics to show patterns of segregation and to hold the city accountable for addressing them.

“It is uncomfortable for many white New Yorkers to acknowledge the ways that segregated schools and neighborhoods amount to hoarding privilege,” said Councilmember Lander in a press release, again stressing that integration cannot mean displacing families through gentrification. “Still, if we want a city of equal opportunity and inclusive democracy, we have no choice but to aim for purposeful integration. Segregated neighborhoods cannot offer our families equal access to opportunity. Segregated schools cannot teach our kids inclusive democracy.”