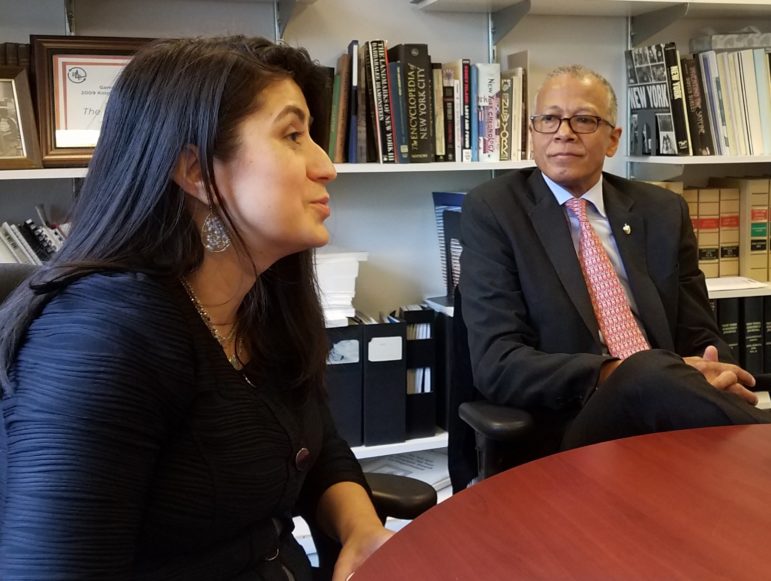 Jessica Ramos (left) and Robert Jackson are not only battling incumbents. They are also fighting against the notion that Gov. Cuomo has brokered a real and lasting peace between regular Democrats and the Independent Democratic Conference.

Virtually from the moment it was announced, it has not been clear whether the deal struck last year to reunify the splintered Democrats in the state Senate was a true breakthrough for blue New Yorkers or a mere blip on the radar screen. At best, the group hug would be several months off. At worst, it could follow the fate of a previous effort to reunite regular Dems and the Independent Democratic Conference (IDC). With special elections in the offing and the non-aligned status of Simcha Felder in the mix, the value of the deal remains hard to estimate.

Robert Jackson, however, has little trouble sizing up the deal’s meaning to him.

“No deal includes me,” he told the Max & Murphy podcast on Monday.

Jackson, who represented a northwest Manhattan City Council district from 2002 through 2013, pledged to continue his campaign to unseat IDC member Marisol Alcantara in the 31st district regardless of whether the deal holds together or not. So did Jessia Ramos, a former de Blasio administration official who is challenging IDC member Jose Perlata in Queens’ 13th district and who lables members of the breakaway conference “Trump Democrats.”

While Jackson and Ramos had strong words about IDC members, they were less forthcoming about their views of the governor, who has at the very least been very accommodating to the conference since its founding. Neither would say whether he should be elected.

Rent regulations, education funding and worker protections are the key issues both see. Ramos talked about her work for the mayor, and whether she’ll be inviting him to campaign for her in the district. Jackson addressed his two previous attempts to win the 31st district seat, and his advocacy on behalf of a restaurant group against the city’s styrofoam ban.

Neither expressed any interest in turning down donations from a particular industry (save for Jackson and a hypothetical and very unlikely donation from the National Rifle Association). Both discussed the long-standing complaint that the state is shortchanging city schools; listen below to what they said when asked whether there was any chance that that inequity, long a favorite talking point for progressive politicians, would ever be resolved.

3 thoughts on “Max & Murphy: Robert Jackson and Jessica Ramos on Their Primary Challenges to Breakaway Dems”