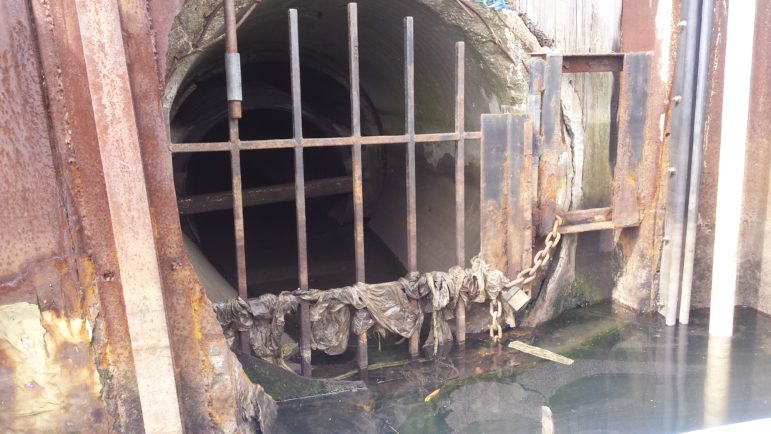 An outfall pipe on Newtown Creek. The shores of the city’s creeks, rivers, bays and canals are dotted with thousands of pipes. No one knows where many of them originate or what their purpose is, though many are dormant.

New York’s harbor is cleaner than it’s been in a century, but the canals and creeks, rivers and bays that create some of the city’s most interesting coastline are still in pretty bad shape.

The biggest problem for those waterways is sewage overflows, which the city is spending billions to try to reduce, with environmental advocates pushing for even tougher action.

But as City Limits revealed in an investigation last week, individual homes, apartment buildings and businesses also pad the pollution load in some city waterways through illicit connections and illegal dumping. These can involve age-old pipes sending sewage into storm drains instead of to treatment plants. Or it can mean people carelessly letting industrial chemicals run off their waterfront property or down catch basins.

It’s unclear how big the problem is, but some recent incidents—like the 16 buildings encompassing just shy of 1,000 apartments that were found to have been draining 200,000 gallons of sewage a day into Coney Island Creek for years—indicate that, while likely not as important as sewage overflows, illicit connections could be a considerable contributor to poor water quality in some areas.

Luckily, these incidents don’t affect the water New Yorkers drink, which comes from well-protected upstate watersheds and is subjected either to disinfection or filtration, but they will make it harder for the city to achieve the federal Clean Water Act’s goal of making all waterways fishable, boatable and swimmable. More to the point, they will endanger the health of people who already fish or boat in the city’s liquid neighborhoods.

This morning, WNYC and City Limits discussed on air the nature of this problem and what individual New Yorkers can do about it. Have a listen, and keep your eyes and nostrils open.