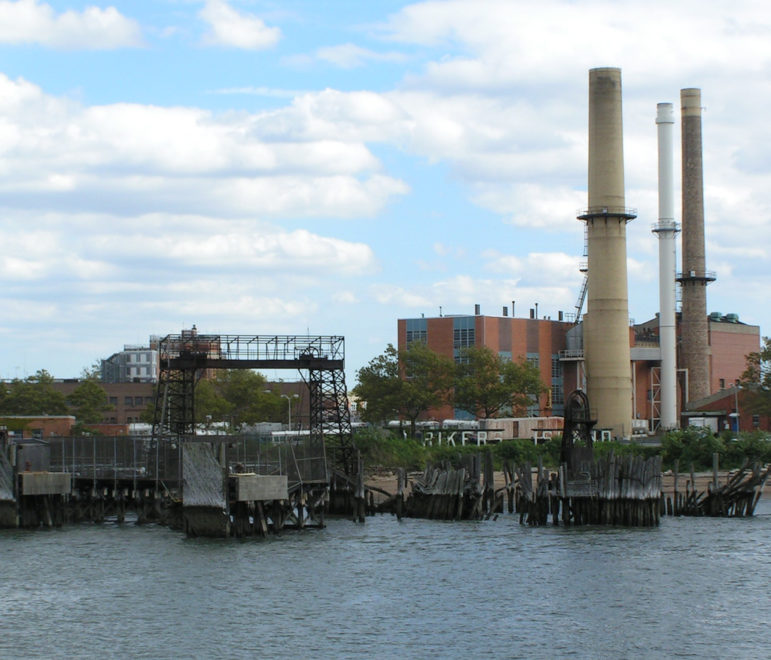 The docks at Rikers. The island's remoteness (it is served by a single bridge) is one reason advocates want it closed.

Closing the jails on Rikers Island will depend on getting public officials to agree that New York City can release significant numbers of people accused of violent felonies before trial, the de Blasio administration testified at a City Council hearing on Monday.

“I think with every person we reduce the population by, the people who are left on Rikers Island are increasingly those who are accused of violent offenses,” testified Elizabeth Glazer, Director of the Mayor’s Office of Criminal Justice.

Testifying at a hearing of the Council’s Committee on Fire Criminal Justice Services, the administration identified the mix of detainees and inmates on the island as a key obstacle to reducing the jails’ average daily population from the current 9,400 to the 5,000 or so that would permit relocating people to new, borough-based jails.

In March, after long resisting the idea, Mayor de Blasio announced that the city would move toward closing the 10 jails on Rikers. His shift came two days before a widely anticipated report by a commission convened by Council Speaker Melissa Mark-Viverito and chaired by former Chief Judge Jonathan Lippman, which recommended closure.

De Blasio’s late conversion to the cause of mothballing the island jails—and his saying that it would take at least a decade to do so—have made advocates suspicious of his commitment and impatient about the timetable. Those concerns drove the questioning and much of the testimony on Tuesday.

“I don’t think they are thinking with the boldness and the urgency that they need to,” Lippman told the committee. “We have to rethink this ‘tough on crime, soft on crime’ syndrome that doesn’t let us be smart on crime.”

The administration counters that, in Glaser’s words, the slogan “‘close Rikers’ masks the seismic systems change that must happen in order to achieve that one goal.” Among those changes: “reaching a consensus on approach to detention for people charged with violent crimes.”

Rikers holds people convicted of misdemeanors who are serving short sentences, people found to have violated the terms of their parole and folks sentenced to state prison who are awaiting transfer—but 75 percent of the population on an average day are people awaiting trial. Of those 6,930 people, 600 are charged with misdemeanors while 2,910 face a non-violent felony charge. The biggest group (3,420 or so) is people alleged to have committed violent felonies.

The city’s plan for getting Rikers’ daily population down to 7,000—the point at which people can begin to be moved to borough jails—foresees cutting the number of misdemeanor detainees in half and the number of non-violent felony defendants by 40 percent but only projects a modest reduction in the number of people accused of violent felonies.

Getting deeper cuts, and hitting the magic 5,000 mark, “will require developing solutions to complicated problems like chronic recidivism and reaching a consensus as to the appropriate use of confinement for those charged with violent crimes,” according to the de Blasio’s administration’s plan.

Asked at Tuesday’s hearing why the administration’s projections for reducing Rikers’ population were so much more modest than the Lippman Commission’s, Glaser replied with one word: “Reality.” She described a complex set of factors, from the technical—judges need a new assessment tool for gauging the risks of releasing defendants before trial—to the political: elected officials, judges, district attorneys and the voting public have to accept that there are safe ways to release people accused of serious crimes before their trial.

Advocates acknowledge that the city faces limitations, but they say de Blasio’s team is failing to take the initiative in pushing for changes. In particular, they believe the city could expand its supervised release program, which allows low- and medium-risk defendants to remain free pending trial.
“Supervised release is a terrific program. You can do more,” Lippman said. “Of course you have to be careful.”

Administration officials testified that an online bail payment system will be up and running by next April. Some committee members were angry that it would take that long, given that it was initially promised by last spring.

The administration has convened a 75-person task force to map out the task of closing Rikers, according to Glaser. The panel includes correction officials, prosecutors, defense attorneys and others. But even though the number of state parole violators is the only part of the jail population that is rising, and despite the fact that a change in state law would be necessary to change that, Glaser says there are no state representatives on the task force, although the city has invited them.

Close Rikers co-founder Glenn Martin told the committee that his coalition is exploring a way for Gov. Cuomo, who has called for a faster timeline for shutting Rikers, “to play much more active role.”
Beyond reducing population, closing Rikers will also require finding borough-based locations for new jails. Last month City Hall released a request for proposals for a firm to create a master plan for converting existing correction facilities in Brooklyn, Manhattan and Queens to take on more population and explore other sites.

On Tuesday, Councilmembers expressed frustration that the administration continues to insist it will not pursue a jail on Staten Island, and that it is holding off on starting the lengthy Uniform Land-Use Review Procedure for those sites.

For now, most of the city’s detainees and inmates remain on Rikers. At least they can avail themselves of the 311 system. According to City Hall, last week alone, there were 724 calls to the city’s complaints hotline from the island.