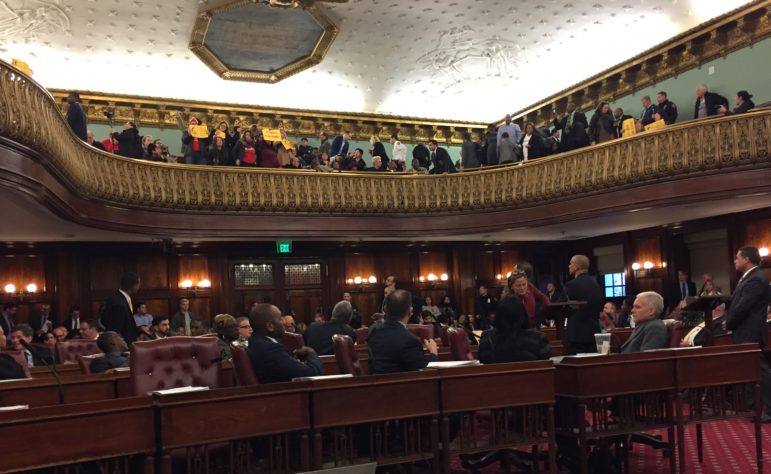 Councilmembers turn to view the chanting East Harlem and Crown Heights protestors in the balcony.

For the de Blasio administration, the City Council, and some advocates, Thursday was a day of exhilarated press releases and hard-fought victories. For some others, it was a more complicated day both successful and tragic.

The Council passed a long-awaited bill, much supported by tenant activists, that will launch a Certificate of No Harassment pilot program. That program will require certain property owners to prove to the city they have not harassed tenants for the previous five years before they can obtain permits to renovate or demolish buildings—unless they agree to rent a portion of units at below-market rates. Forty-four councilmembers voted in favor of the bill, while two Staten Island Republicans voted against it. (Several councilmembers were absent.)

The City Council also unanimously passed a revised version of the East Harlem rezoning. That’s the third neighborhood rezoning proposed by the de Blasio administration to receive Council approval. It encourages development on major corridors while requiring that 20 to 25 percent of the apartments in new buildings are rented at below-market prices. The administration also committed to a variety of investments for the neighborhood.

In addition, the Council approved the redevelopment of the Bedford Union Armory in Crown Heights. Following negotiations between Councilmember Laurie Cumbo and the administration, the redevelopment will include a new recreation center, nonprofit office and rental space, a medical facility and 415 rentals, of which 40 percent will be rented at market-rates and 60 percent will be targeted to a range of incomes. Forty-three councilmembers voted in favor of the project, Jumaane Williams abstained, and Darlene Mealy and Inez Barron voted against.

But the two latter initiatives continue to face passionate opposition, with many concerned about the impact of adding more market-rate units and high-income residents to low-income communities already rife with landlord harassment and displacement.

The afternoon did not go down without protest. The disruption began after remarks by Land Use Chair David Greenfield, who justified the Bedford Union Armory project and, directing his comments to the members of the public in the balcony, said, “To folks up there, I respect you, but quite frankly we had an election. The voters were clear…The voters support councilmember Laurie Cumbo,” referring to Cumbo’s election to a second term this November.

Crown Heights and East Harlem activists and residents in the balcony began to chant “kill the deal,” “the city is not for sale,” and “Laurie lies.” They were slowly escorted out by security and NYPD officers over the course of eight minutes.

“When I was standing to the side, people asked if I was scared, if I was concerned,” Cumbo said to the Council later. “But when I think about that, every time I come into this chamber, I walk in with the knowledge and the understanding that my predecessor, the late James E Davis was shot and killed here in City Hall. So this level of yelling, of screaming, of being inappropriate, of disrepecting one another, creates a very dangerous environment for everybody involved. … To disrespect one another, to yell at, to shout at, to overtalk, to threaten, this is not what democracy is and this is not what democracy looks like.”

The late Crown Heights councilmember Davis was shot by a political opponent in the Council chambers in 2003. It was not clear by press time of what nature were the “threats” Cumbo was referring to. She also said she’d done her best to listen to her constituents’ concerns and she justified the market-rate units, saying they were necessary to pay for all the other amenities of the project.

As they cast their votes, many of Cumbo’s colleagues voiced their support for both the project she’d put together, for her negotiating the project while on maternity leave, and for the “grace and dignity and respect,” with which she conducted herself, in the words of Stephen Levin.

But Barron said that given the incomes in the Crown Heights community and the homelessness crisis, the project should have been 100 percent below-market, built by a nonprofit, and incorporated a community land trust. Mealy also said the project did not bring enough affordable and supportive housing.

Williams abstained, explaining he’d not received answers to certain questions about the project (he’d earlier said he was interested in finding out more about the pricing of the recreational activities to the communities), but said he “took exception to people calling her a liar.”

During the fall Council campaign, a supporter of Cumbo sent out material—an “independent expenditure” made independent from the campaign— saying that Cumbo would fight against the Bedford Union Armory until 100 percent of the units were affordable. Critics allege that she didn’t do enough to distance herself from that mailer and thus that she can be called a liar. As for the pricing of the recreational activities, half of memberships will be discounted at rates of $10 a month for adults and $8 a month for children, while the prices of the rest of the memberships have not yet been determined.*

Some councilmembers voted in favor of the Bedford-Union Armory project but called for more discussion about a citywide policy for public land, the need for more public subsidy for lower incomes, and the need for affluent neighborhoods to take on the responsibility of adding affordable housing. “We can’t build all the affordable housing on the backs of the councilmembers in poor districts,” said Antonio Reynoso.

The discussion about the Bedford-Union armory isn’t over. The Legal Aid Society is suing the mayor, Council, and the developers for using an environmental review method that the lawyers argue underestimate the potential for market rate units to cause residential displacement. The two sides will present their arguments in court on February 8.

With the controversy over the Bedford-Union armory overshadowing all else, there was less discussion about any of the other items on the agenda. Speaker Melissa Mark-Viverito, who is soon to be termed out, spoke concisely about her work to make the city’s East Harlem rezoning proposal more like the East Harlem Neighborhood Plan created by a team of community groups. At the end of the afternoon, she acknowledged that some of the protest had been directed toward her plan. “We know in this job we can’t please everybody. We do the best that we can and we work our damndest and our hardest to make sure that community input is part of the decisions we make.”

Brad Lander praised Mark-Viverito’s rezoning as the first that includes a commitment to invest in local NYCHA developments. Funding for NYCHA is one of the central demands made by participants in the Gowanus rezoning study underway in Lander’s district. Barron said she had at first had “concerns” about East Harlem but, after clarifying that the rezoning would not allow “option 2” of the mandatory inclusionary housing policy (which targets families making a slightly higher income), voted in favor.

A couple participants in the East Harlem Neighborhood Plan group meetings told City Limits they were disappointed that Mark-Viverito had not ended up removing blocks of rent-stabilized buildings from the rezoning, as she said in a meeting in November that she would aim to do. They were also disappointed that there hadn’t been more communication between the East Harlem Commmunity plan participants and the speaker during the last few weeks of closed-door negotiations over the details of the final plan.

“I want to pursue some legal options,” said Marina Ortiz of East Harlem Preservation, who opposed a rezoning of any sort. Asked if she was aware of the Legal Aid Society’s lawsuit on the Bedford Union armory, she nodded. “I would like to jump on board with that. I would like to see a citywide class-action suit” involving all neighborhoods of color that are being rezoned to promote development, she said.

“The East Harlem plan and Bedford Armory Recreation Project mean thousands of affordable homes for neighborhood families,” the mayor said in a statement. “They mean jobs for local residents, community spaces for learning, growing and gathering, and investments in parks, schools, and roads. As we plan for the future, we protect the core values of our city and our neighborhoods – and most importantly the very residents who built these communities.”

With the exclusion of Staten Island’s Steven Matteo and Joseph Borelli, everyone on the Council has been jubilant about the passage of the certificate of no harassment. The affected buildings include those with signs of distress in neighborhoods that have been rezoned, or are in the approval process—and if other city-sponsored neighborhood rezonings move into the approval process, they too will be added. It also applies to buildings citywide that meet certain criteria, such where a court has found evidence of harassment.

“For those landlords that don’t do the right thing because it’s right, or follow the law because it’s the law, [the Certificate of No Harassment program] will now simply turn tenant harassment into a bad business move,” said Emily Goldstein of the Association for Neighborhood & Housing Development, in a press release from the administration.

The de Blasio administration, which at first resisted the idea of a citywide certificate, also praised the program that it had developed along with the Council and advocates. In a statement, HPD Commissioner Maria Torres-Springer said the administration was committed to using “every tool at its disposal – and to [being] creative in adopting new approaches – to aggressively combat harassment and disrepair to keep New Yorkers in their homes and preserve the affordability of neighborhoods.”

Prior to the meeting and before the councilmembers entered, community members complained they were being told by security officers that they were not allowed to record the meeting, and insisted it was their right under New York State law. They were then left alone. One security officer confirmed that “these were the instructions we were given” while another said that cellphones were fine, but larger devices could be a safety hazard.

It was a busy day in which the Council also passed a package of criminal justice reform bills, a bill that will require the city to create a “Speculation Watch List,” that identifies rent-stabilized buildings purchased by predatory equity companies where tenants are at risk of displacement, and an amendment to broaden the definition of harassment. The Sutton Place rezoning was approved, and the Council reformed the commercial rent tax to help Manhattan’s small businesses.

Correction: Originally stated that the pricing of the discounted memberships is unknown. We regret the error.