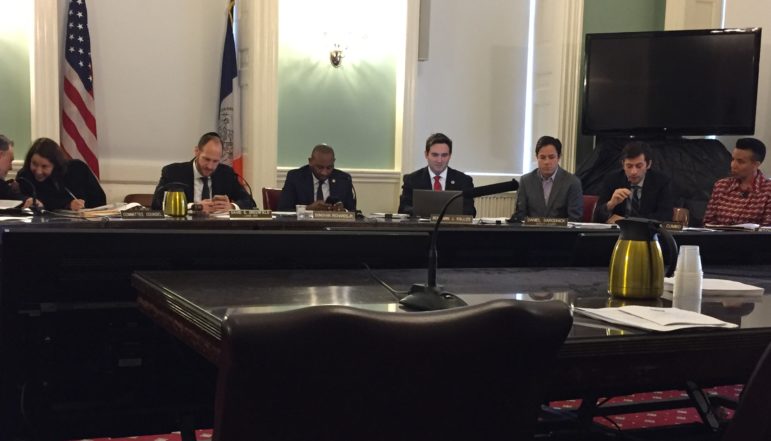 On Tuesday, the Land Use Committee unanimously approved a modified version of the East Harlem rezoning, making it the third neighborhood rezoning focused on housing growth to be approved by the committee under the de Blasio administration.

Each of those rezonings have been the subject of significant media attention over the past year. In particular, the East Harlem rezoning has incited great debate, with some community members in support of modifying the Department of City Planning’s proposal to make it more in-line with the East Harlem Neighborhood Plan, a comprehensive proposal generated through a community-planning process that included a more modest rezoning. Others argued that any kind of rezoning would drive displacement and that, instead, the city should use other methods to address the affordability crisis.

Before Tuesday’s vote, local councilmember and Speaker Melissa Mark-Viverito announced reductions in some of the zoning designations with the aim of making the rezoning more like the East Harlem Neighborhood Plan. Densities and height limits were lowered on Park Avenue and Third Avenue, and height limits were lowered on Second Avenue and the intersection of Lexington Avenue and 116th Street. Mark-Viverito also announced a suite of investments and initiatives associated with the plan, including a $50 million investment in repairing NYCHA housing, a commitment to prioritize three other public sites in the neighborhood for affordable housing development, the establishment of a Certificate of No Harassment program to bar landlords who’ve mistreated tenants from getting city permits and the creation of a new Workforce1 center to help people find jobs, among other initiatives. Altogether, the city dedicated $178.2 million in capital commitments to the plan.

Mark-Viverito hailed the rezoning effort as “a major victory for the El Barrio East Harlem community,” stressing that it was necessary to both preserve the neighborhood character of the community while triggering the city’s new mandatory inclusionary housing policy in order to create more below-market housing.

“Our affordable housing plan is on the move, with new programs and investments, a new goal of 300,000 affordable homes – and now an agreement on the East Harlem neighborhood plan that will bring nearly 4,000 more affordable homes to residents of this diverse and vibrant community,” said Mayor Bill de Blasio in a statement on the passage of the rezoning. “With Speaker Melissa Mark-Viverito, Council Member Bill Perkins, and the entire City Council, we are pushing on every front to keep this city affordable.”

As for Sendero Verde, the 100 percent below-market project on 111th Street, Mark-Viverito said that the percent of units for families making below 30 percent Area Median Income ($25,770 for a family of three) had been increased from 20 percent in the original plan to 30 percent of total units, compensated by other units targeted to a higher income band.

Click here to view the speaker’s full press release, including the zoning changes and the list of investments. The release includes quotes from some members of the East Harlem Neighborhood Plan steering committee, including David Nocenti of Union Settlement, who praises the Council for making the rezoning plan “much closer to the vision that the community laid out in the consensus East Harlem Neighborhood Plan,” and Borough President Gale Brewer, who says the new plan “is a significant improvement over what was first put forward by the administration.” Community Voices Heard, another member of the steering committee that made demands for 40 percent of housing for families making below 30 percent Area Median Income and a $200 million investment in NYCHA, is not quoted.

In her remarks, Cumbo emphasized that the project had originally been envisioned as just a recreation center with market-rate housing to support its costs, but that “conditions in the community had dramatically changed” and that she had decided the project must be used to address the effects of gentrification. The project, she said, was “the most significant new affordable housing project Crown Heights has seen in decades.”

In the audience, former Cumbo challenger Jibari Brisport told City Limits that he believed the deal should have included 100 percent affordable housing and that the 40 percent market rate units in the plan would drive gentrification in the neighborhood. Councilmember Inez Barron also voiced concerns about the market-rate units when explaining her vote against the project. Listen to back-and-forth with Cumbo, here (it starts with Barron):

16 councilmembers voted for the project, Barron voted no and Jumanne Williams abstained, saying that while he wished there could be more affordable housing, he understood the benefits of having market-rate rentals permanently cross-subsidize the recreation space. He also said that he wanted more time to evaluate how the recreation center would be made truly accessible to the community.

The Committee also voted to eliminate the “grandfathering provision” that the City Planning Commission had attached to the Sutton Place rezoning—a major victory for residents in the East 50s. The East River Fifties Alliance spearheaded their own rezoning to stop the construction of high-rises in their neighborhood as well as encourage more affordable housing development above and beyond what is required under the voluntary inclusionary housing program already in place there. The rezoning went through several changes and compromises, including the removal of any additional affordable housing requirements (though the city has committed to reviewing the inclusionary housing framework citywide). The City Planning Commission also tried to allow some projects to be grandfathered-in under the old zoning—a provision the Council voted to remove. Williams also abstained from this vote due to concerns about the lack of extra affordability requirements associated with the rezoning.

While they cast votes in favor of each project, Councilmember Ritchie Torres and Councilmember Reynoso both added comments that seemed to call for a deeper discussion of the city’s development policies on a citywide basis. Reynoso remarked that affordable housing is being built almost exclusively in areas where people of color reside, while Torres said that there needed to be a citywide policy for the development of public land.

Reactions to the pending approval of the modified East Harlem rezoning? Share your thoughts by e-mailing Abigail@citylimits.org.