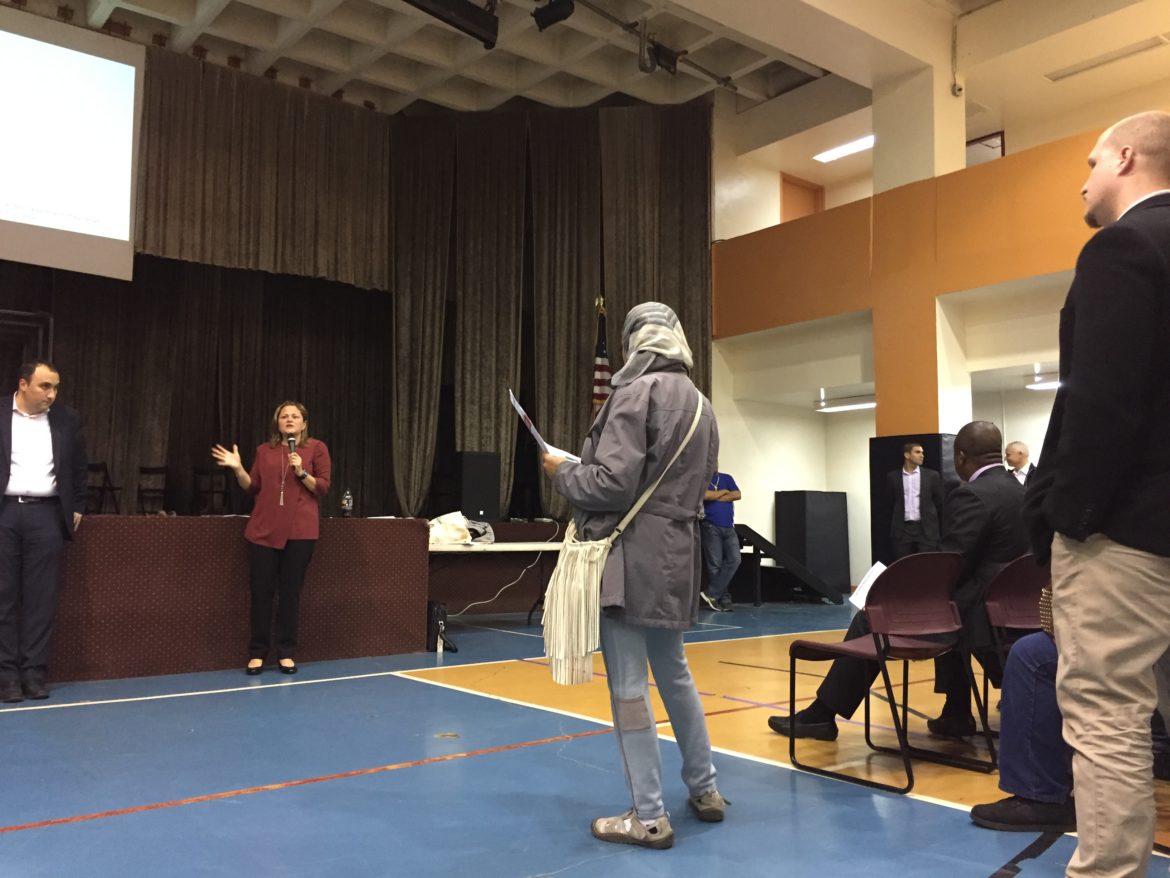 Constituents line up to converse with East Harlem Councilmember and Speaker Melissa Mark-Viverito at a public meeting at Taino Towers on Thursday, November 2nd.

The de Blasio administration’s proposed East Harlem rezoning is expected to move to a final City Council vote at the end of this month. Local councilmember and Speaker Melissa Mark-Viverito is now in the process of negotiating with the Department of City Planning on the details of the plan, which would allow taller, bigger buildings on several avenues and mandate that developers set aside a share of new apartments as income-targeted units under the city’s new mandatory inclusionary housing policy.

Though all the official hearings have passed, Mark-Viverito hosted an additional public meeting at Taino Towers on Thursday night—without the two-minute time limit per speaker usually imposed at hearings—to continue the exchange in East Harlem. She has also been meeting with community groups individually.

Mark-Viverito, who was barred by term limits from seeking re-election and will leave office and hand over the speaker’s gavel on December 31, began by explaining for what she is fighting for in ongoing negotiations. In many ways, she seeks to make the city’s plan more like the East Harlem Neighborhood Plan, a comprehensive document drawn up by a team of stakeholders that recommended just enough new density to trigger the city’s mandatory inclusionary housing policy, the redevelopment of a number of public sites with income-targeted housing, and numerous other investments.

Mark-Viverito says she’s fighting for lower density along Third Avenue and Park Avenue and for the removal of several blocks from the rezoning where there is a high concentration of rent-stabilized housing. And she’s fighting for a number of investments relating to affordability levels at the Sendero Verde project (on city-owned property at 111th Street), the opening of a local Workforce1 center, the transfer of city-owned buildings to the East Harlem/EL Barrio Community Land Trust and the exploration of future ways to expand the CLT, looking at whether other public-owned sites mentioned in the Neighborhood Plan could be developed, revitalizing La Marqueta and more. She says legislation related to the establishment of a Certificate of No Harassment program, which would require landlords to prove they had not harassed tenants before demolishing or renovating a building, is on its way.

“Invest resources in repairing NYCHA” is also one of her demands; it will be interesting to see if she can move the de Blasio administration on this point. The administration has expressed hesitancy about using the Neighborhood Development Fund, which makes capital investments to rezoning neighborhoods, to address repairs for NYCHA developments.

Mark-Viverito has frequently argued that the neighborhood is already losing 360 units of private affordable housing per year (rent stabilized units going market rate, according to the East Harlem Neighborhood Plan), and will only lose more if the city does nothing. The rent-restricted housing created through the rezoning, she believes, will at least allow the neighborhood to “tread water.” (Later, however, a critic pushed back, challenging the dichotomy between doing “nothing” and passing the rezoning.)

A few members of Community Voices Heard, a member-lead group that fights for the rights of low-income families and a key stakeholder in the East Harlem Neighborhood Planning process, demanded more precise commitments. The group has repeatedly called on the city to dedicate $200 million to meet some of the $1.88 billion need just in East Harlem’s NYCHA developments, and to ensure 40 percent of units developed on public-owned property within the neighborhood are affordable to extremely low-income households (families of three making $25,770 and less).

“It is part of my conversations right now within the city,” she replied, saying that she couldn’t specify an exact amount on NYCHA investments or on affordability levels “because the conversations are fluid.” She did emphasize that she’s managed to get more units for extremely low-income families in recent projects, including one with 30 percent of units for homeless families.

The Sendero Verde project currently includes 134 apartments, or just over 20 percent of total units, for extremely low income families, according to a document from the Borough President’s office released in August.

Peggy Earisman from Manhattan Legal Services praised the city for instituting a right to counsel in housing court, but expressed concerns that the legal services had so far only been rolled out in a few neighborhoods per borough: She told City Limits that so far the program is active in ZIP codes 10025, 10026 and 10027—the Upper West Side and Central Harlem. (East Harlem residents already can get legal services to combat landlord harassment through another program, but the Right to Counsel program specifically hasn’t been expanded to East Harlem yet, Earisman says.) She further emphasized the importance of a coordinated preservation strategy that brought together all the neighborhood’s nonprofits, as well as continuous investment in legal services from the city. Mark-Viverito said she was actively working towards those demands and said the city was intending to make legal services as “baseline” item, funding it every year.

Others, however, continued to express adamant opposition to any rezoning. They pointed to the fact that on private sites, developers will only be required to provide about a quarter of the housing at below-market rates, and expressed concern that an influx of market-rate units would lead to gentrification and displacement. Some accused her of catering to her many real-estate donors, charges she adamantly rejected.

Juan Peralta of the Justice Center in El Barrio disputed Mark-Viverito’s notion that the neighborhood needs more housing affordable to a range of incomes, noting that middle-income families have the option of moving, while extremely low-income families have no options.

Perhaps the most poignant moment was when another member of the Justice Center asked why the city couldn’t rezone to require 100 percent affordable housing on private land. “We can’t do that,” said Mark-Viverito. “If we get to a socialist society, maybe we can consider that.” It’s a frequent problem that New York’s elected officials run into these days: their constituents are ready for a more socialistic approach to land use, but elected officials say they’ll be sued for running afoul of America’s private property rights.

A large number of the meeting attendees, however, came out to support the plan. Many, though not all, were young male construction workers, and some of those workers were with the group Positive Workforce, which trains workers for construction jobs and receives significant funding from the Speaker, including $150,000 this year. (Community Voices Heard got $50,000 this year.) The workers lined the sides of the Taino Towers gymnasium with posters calling for a responsible rezoning along the lines of the East Harlem Neighborhood Plan. 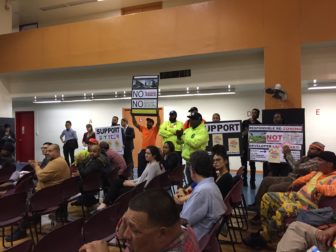 “What is clear is there is going to be jobs and employment for Black and Latino young men,” said one supporter of a rezoning.

Others who spoke in favor of a rezoning praised Mark-Viverito for her leadership, said they believed the speaker was doing what she could to help the neighborhood within the current legal framework, and asked what they could do to ensure the community’s vision was realized.

While Mark-Viverito remained matter-of-fact throughout the night, there were moments of real heat from both sides. Rezoning critic Pilar DeJesus interrupted Mark-Viverito with her own megaphone several times, and when DeJesus went up for her own turn at the mike, she could barely be heard above the booing from workers. Soon after, when a supporter of the rezoning got up to speak, members of the Justice Center, DeJesus and others broke into chants of “Sellouts! El Barrio No Se Vende.” There were aggressive shouts between stakeholders on both sides.

Just as Mark-Viverito was trying to wrap up the two-hour meeting, a large group of members from Movement for Justice in El Barrio entered, and sparred with Mark-Viverito for nearly another half-hour on the issue of whether their group had been included in the process and on the matter of the rezoning itself.

The real question ahead remains seeing what the administration agrees to—and in what ways the neighborhood will change after a plan is passed.