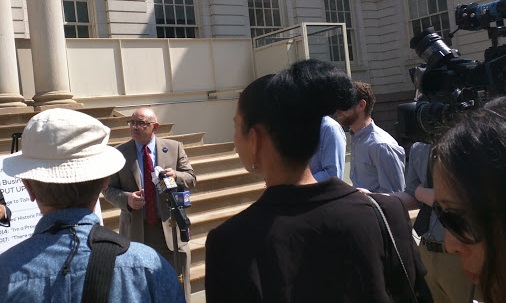 Criticized for failing to offer specifics on his approach to Rikers Island at the first Democratic primary debate two weeks ago, former Brooklyn City Councilmember Sal Albanese outlined in more detail his plan for the jail complex on Tuesday–a day before he and Mayor de Blasio meet for their final debate.

Flanked by his running mate David Eisenbach, who is challenging incumbent Public Advocate Letitia James in the September 12 primary, Albanese described a plan that revolved around thinning out the population on the island and then closing the facilities there that displayed the worst conditions.

After resisting for months the call to shutter Rikers, De Blasio in March signed on to a plan to close the facility, citing its physical isolation and poor facilities as inefficient and harmful to inmates and their families. The mayor says it will take at least 10 years to accomplish and has said little about where replacement facilities would be–except to announce early on that Staten Island would not have to host one.

Albanese on Tuesday called for removing all non-violent inmates to the Vernon C. Bain prison barge off the Bronx or the Brooklyn House of Detention, then closing the worst jails on Rikers (there are nine facilities on the island) within his first two years as mayor.

Glenn E. Martin, president and founder of JustLeadershipUSA and founder of the #CLOSErikers campaign, dismissed the specifics of Albanese’s plan because it calls for keeping Rikers open. “However, the sense of urgency that he shares with us about the tremendous harm caused by Rikers is commendable. The rest of the mayoral candidates, especially Mayor de Blasio, would do well to adopt a similar sense of urgency around the 8,000 people who continue to languish on Rikers Island every day, where they are subjected to deplorable conditions and routine human rights abuses.”

Dan Levitan, spokesman for the de Blasio campaign, told City Limits in a statement: “Under Mayor de Blasio, New York City has reduced the use of solitary confinement by 85%, expanded alternatives to incarceration, and simplified the bail and summons process to keep non-violent defendants out of the jail system. The Mayor made an historic commitment to closing Rikers Island and is planning to move all juveniles off the island. That is his record on reforming our jail system and one that New Yorkers are rallying behind.”